A View on New Vue: What to Expect in Vue 3

The next version of Vue brings a lot of improvements over its predecessor. It will be faster, smaller and offer new features. In this article we go through what Vue 3 will offer.

At the time of writing this article, Vue 3 is in beta, and the stable version is supposed to be released in the second half of 2020. The next version introduces new features and improvements over Vue 2. The goals for Vue 3 were to make it faster, smaller, more maintainable and easier to utilize for targeting different platforms than just web.

New Reactivity Implementation Based on Proxies

Vue’s internal implementation has been rewritten to utilize new language features which were introduced in ES2015. The next version of Vue will use proxies for its reactivity system, instead of Object.defineProperty. This change will eliminate caveats, which are currently present in the second version of the framework. For instance, Vue is not able to detect property addition and deletion.

Likewise, updating items that are nested in an array also will not be detected.

To solve these problems, Vue provides $set and $delete methods. With the introduction of proxies, these methods will not be needed anymore. Proxies are now supported in all major browsers; unfortunately, there is no way to polyfill them for older browsers like Internet Explorer. Therefore, Vue 3 will offer two versions, one with proxy-based reactivity, and one based on old reactivity implementation. This of course means that the caveats mentioned will still be present, but you can use Vue 3, even if you have to support older browsers.

Vue 3 will be much faster and smaller than its predecessor. A compressed and minified file for Vue@2.6.10 weighs around 20kb, while Vue 3 is estimated to be half the size. This is a great improvement in size and will improve load time. The less code, the better after all.

What’s more, the Vue team has made great improvements to the virtualDOM implementation which was rewritten from the ground up and provides up to 100% faster mounting and patching. The image below shows performance comparison between versions 2.5 and 3. The new version is twice as fast, and uses only half the memory. 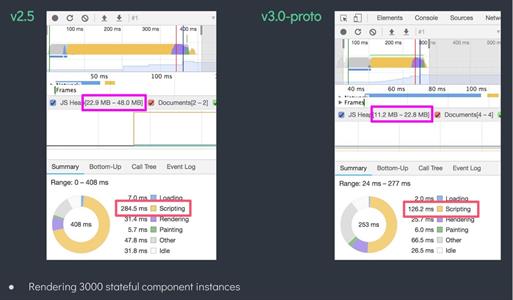 Furthermore, with new virtualDOM implementation, the runtime will receive more hints about how to deal with code and take fast paths whenever possible. The compiler will also create better optimized code and hoist static nodes, to speed up and avoid unnecessary rendering. 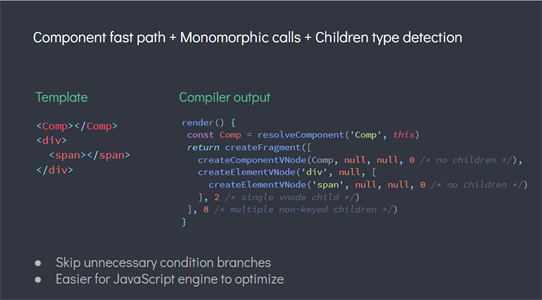 Other improvements include optimized slots generation, static props hoisting, and inline handler hoisting. You can read more about it in Evan’s presentation here.

Composition API is a new way of writing stateful logic in Vue components. So far, we could use mixins, scoped slots or higher order components, but all of these have their cons. This feature is inspired by React’s Hooks, but a bit better, as it avoids a few caveats. For instance, Vue’s hooks will not be called on every render, but instead just once, in the setup method. Thanks to that, there will be less work for the garbage collector.

In Vue 3, internal packages are split into separate files. This will result in more modular and maintainable source code for the team working on the framework. It will also make it easier to use Vue’s renderer on different targets than just web. Good examples are Weex and NativeScript—these are frameworks that utilize Vue for creating mobile apps. 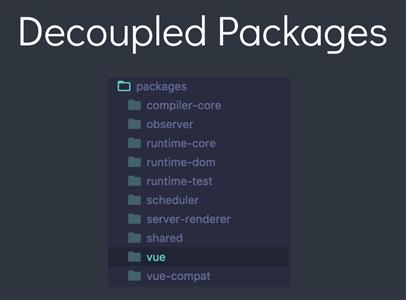 Normally, elements are rendered exactly where they are defined. However, sometimes we would like to render elements somewhere else in an application. For instance, if we have a global modal component, it would be nice to be able to open it and set its content from anywhere in the application. At the moment, this is possible thanks to the portal-vue package. In Vue 3, this feature is provided out of the box, but it’s called Teleport.

At the moment, a Vue template must always have one root element like so:

Inspired by React’s Fragments, Vue 3 will allow multiple root nodes. This is very useful especially for list and table elements, as, for instance, a table row or a list element shouldn’t have a div as a parent.

In Vue 2, to achieve the same outcome, a functional component would need to be used:

Most Vue projects start in the main.js file where the global Vue instance is created and mounted. Other libraries and plugins would also be added to this Vue instance. In Vue 3, a method called createApp will be used to create a Vue app instead. The benefit of this is the fact that third-party libraries will not be able to make changes to our app instance—for example, by using global mixins, filters or directives.

Currently, only one v-model can be used on a component.

Vue 3 will allow us to use multiple v-models on a component.

The API for creating custom directives will be changed to better align with Vue’s lifecycle hooks.

Sometimes a component might render and we might not know why. renderTriggered is a new lifecycle hook that can be used to find that out.

Suspense is another new component added to Vue 3. Suspense component will allow displaying a fallback content while the component passed in the default slot is being loaded.

Vue 3 is much faster and smaller, and it will offer a lot of improvements over its predecessor, as well as bring new useful and exciting features that will allow us to write cleaner and more maintainable code. You can already start using Vue 3 by using vue-cli or Vite, a new build tool created by Evan You.