Fiddler version 4.5 (and v2.5 targeting .NET2) is now available for download. The new version represents the largest set of improvements for Fiddler in over three years, and includes hundreds of bug-fixes and new features—please download it now!

A Filter submenu has been added to the Web Sessions List’s context menu. Using this menu, you can quickly use attributes of the currently selected session to remove similar traffic and prevent its display in the future. For instance, I can quickly filter out all requests to a specified target host:

… and all previously captured and future requests to that host will be hidden. The currently enabled direct filters are listed in the new Filters Gutter beneath the QuickExec box:

Right-click a filter entry to remove it. Hover over the Filters label to update the numeric counter showing how many sessions were hidden by filters listed in the gutter.

The long-awaited WebSockets tab is now available. Simply double-click on any WebSocket session in the Web Sessions list:

…to display the tab:

The tab offers the ability to reassemble fragmented messages, and display each message’s content using a small set of Inspectors:

If your WebSocket traffic contains higher-level formats (such as binary images) you can click the Inspect as Response button to send the message to the main Web Sessions list for inspection using any Fiddler Inspector.

Fiddler can now automatically save SAZ archives and clear the session list on a regular schedule. Click Tools > Configure AutoSave to show the AutoSave tab:

Click Tools > New Session Clipboard to create a new window into which you can drag/drop sessions you’d like to keep around outside of the main Web Sessions list:

Fiddler’s TextWizard has been updated with additional formats; the old radio buttons have been replaced with a drop-down list of formats.

Newly supported formats include conversion To Base64URL strings (often used by Java and security protocols) and To C# byte[] strings, which enable you to easily generate C# source code for a given output, like so:

Fiddler 4 has long offered a choice of HTTPS versions (defaulting to SSL3 and TLS1.0) when talking to servers, but previously using TLS1.1 and TLS1.2 required somewhat complicated configuration steps. You can now easily control what SSL and TLS versions Fiddler offers to servers using the Enabled Protocols link on the Tools > Fiddler Options > HTTPS Tab:

…into the much more readable:

Fiddler’s Composer tab now includes a History pane to enable you to re-issue previously composed requests  easily, without having to drag and drop from the main Web Sessions list.

Simply double-click on any request in the list to update the headers and body currently in the Parsed tab.

The ImageView Inspector offers a new Image Quality Explorer tool that enables you to easily explore the relationship between image format/quality and file size. To invoke it, right-click an image and choose Explore Quality from the Tools submenu: 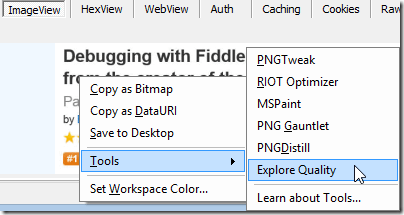 The image will open in a new window. Drag the slider left to observe the impact of quality reductions on the image (shown at the top) and on the file size (shown at the bottom): 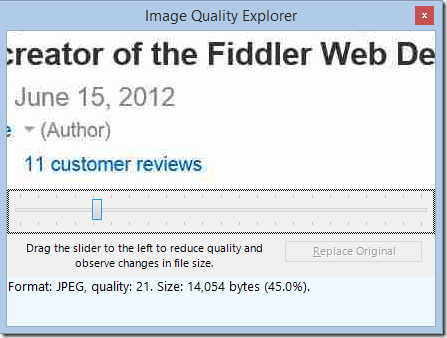 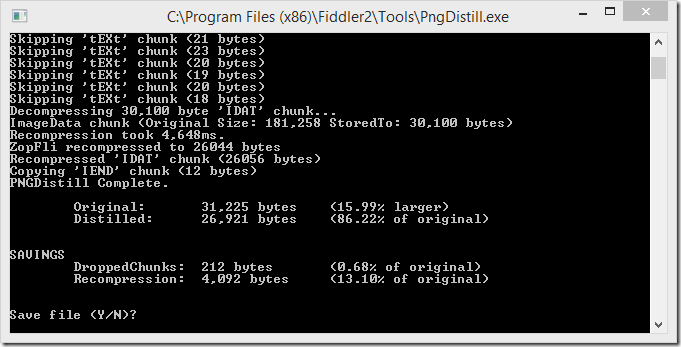 While it’s easily launched by Fiddler, you can also automate the pngdistill.exe tool directly within your build and deploy scripts to ensure that performance problems are avoided before your users experience them.

Dozens of performance improvements have been made around Fiddler to speed:

On Windows Vista and later, if Fiddler hangs for any reason or encounters a crashing bug, the tool will detach the proxy and preserve as many settings as it can before restarting.

Various improvements were made around the Fiddler for better behavior on high-DPI systems. For instance, Fiddler’s icons now include higher-resolution versions for improved scaling, and assorted UI features now resize more appropriately on high-DPI systems. Fiddler is not yet marked as a “DPI-aware” application and, thus, will use the system’s default scaling if the screen is over 150 DPI.

If you’d like to disable the system’s default-scaling, you can start Fiddler with the dpiAware command-line argument.

Fiddler now offers an Import Folder option to bulk-load a set of SAZ files that share a common password.

In other exciting news, my best-selling 2012 book about Fiddler has been fully-updated and the new Second Edition is now available in DRM-free PDF ebook format. Next month, an updated paperback should be available from Amazon. 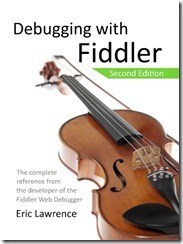 As you can see, this is a huge release and we’re excited to get it in your hands. But this is only the beginning of the next era of Fiddler: over the coming weeks and months, we’ll be releasing new versions with new fixes and features. We’ll be updating the Fiddler for Linux build, rev’ing FiddlerCore and making several exciting announcements about the Fiddler product line.

Thanks for all of your support!