Let’s see a case study for how JustMock lets you automate testing for a typical microservice architecture (including mocking Entity Framework).

For my case study, I’m going to implement the Provider/Consumer pattern—it’s a popular pattern that provides both high scalability and reliability. This implementation of the pattern uses a Web API frontend (the Provider) to accept requests and an Azure Function backend (the Consumer) to process those requests. The Provider writes requests to an Azure Storage queue and the Consumer reads and processes those requests as they appear in the queue.

For my case study, my web service accepts SalesOrder objects from clients and writes the objects to a Storage queue (the client just gets back an HTTP 202 Accepted status code). This takes virtually no time at all, so this Web API application can handle a very large number of requests in any period of time. 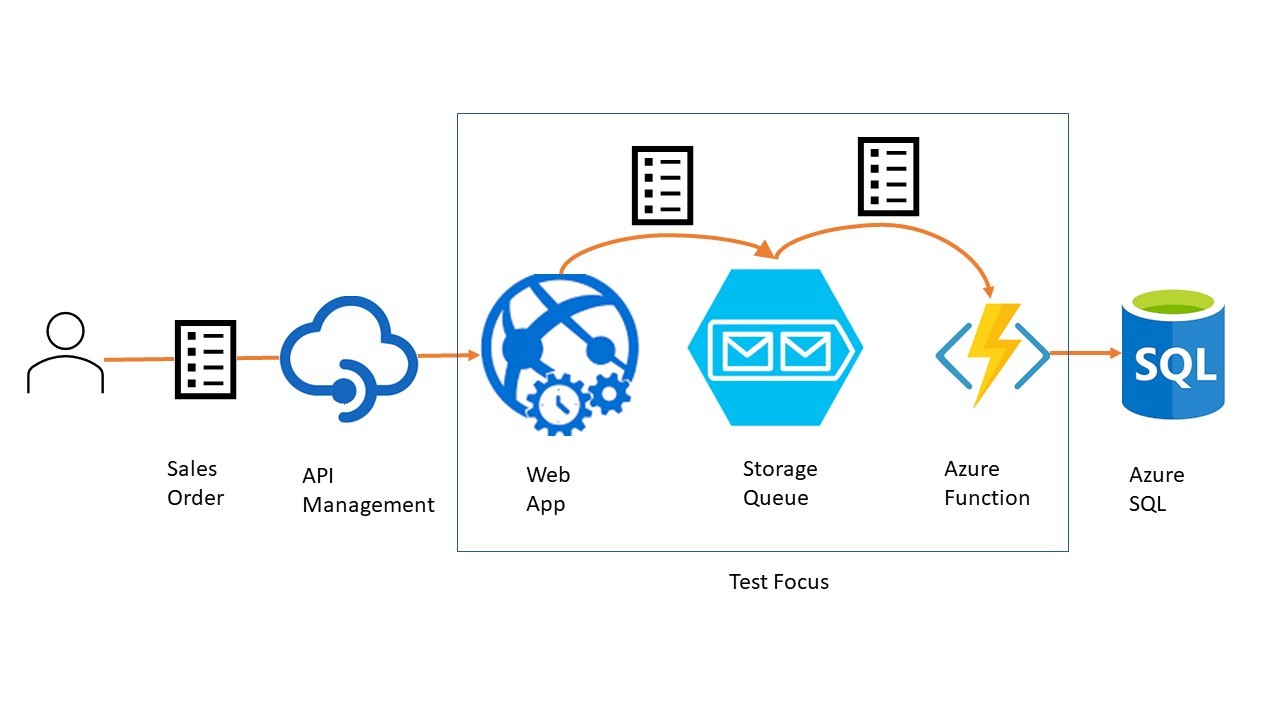 In .NET Core (or, really, any version of ASP.NET Web API), that part of my Azure microservice would look something like this:

The Azure Function that acts as the Consumer in this implementation of the pattern is wired up to execute any time a message appears in the queue and is automatically passed the body of the message. The function will take more time to process the SalesOrder it reads from the queue than the Web Service took to write the SalesOrder to the queue—among other tasks, the Consumer is going to be handling all the database updates using Entity Framework.

JustMock makes it easy to create tests that isolate our code changes, even in “untestable” legacy applications.

When a message appears in the queue, Azure passes the body of the message and a reference to a logging tool to the function. An Azure Function that processes that message and, eventually, adds it as a SalesOrder to the database, would look something like this:

My first step in creating automated tests for these components in Visual Studio is to add a test project to the solution that holds them, using the project template that’s installed with JustMock. Once that’s in place, I can start writing my tests.

For the Provider, the critical test is to ensure that the right thing gets written to the queue—if that doesn’t happen or goes wrong, then everything downstream of the Provider is going to fail.

To start the test, I need a mock SalesOrder object to pass to my Web Service’s Get method. The code to create that is pretty simple:

Next, I need to mock the QueueClient’s SendMessage method so I can capture what gets written to this queue. First, I instantiate a QueueClient object to use when configuring my mock SendMessage method. I’m not going to be using this QueueClient for anything other than setting up my mock methods, so I pass it dummy values, like this:

With that in place, I use JustMock’s Mock class to provide a mock version of the SendMessage method that, instead of writing to the queue, updates a variable in my test. I can then check what ends up in that variable in my Assert statements at the end of the test to see if the Provider did the right thing.

After setting up my variable, there are three steps to mocking SendMessage (though, thanks to JustMock’s fluent interface, it all goes into one statement).

Second step: This isn’t the QueueClient object that’s used in my Provider’s Get method (that method creates its own QueueClient object). However, if I use JustMock’s IgnoreInstance method, any mocking I do to the object I create here will also be applied to any instance of QueueClient created within the scope of my test.

Here’s the code that defines the variable and configures the mock method that updates that variable:

Now that I’ve taken control of my Provider method, I can run my test. I instantiate the Web API controller that holds my method and call the method, passing my dummy SalesOrder object:

Because of my JustMock code, the JSON version of the SalesOrder object normally written to a queue will now be put into my writtenSO variable where I can check it. My first Assert, then, is to see if that variable is actually a SalesOrder object:

Putting it all together, the test looks something like this:

My tests wouldn’t stop here in real life, of course. For example, I’d probably check to make sure this SalesOrder has the same property values as the SalesOrder object I passed into the Get method; I’d also create tests with various “invalid” SalesOrders to ensure the Provider does the right thing with them. And I’d do a test without mocking SendMessage to make sure I can successfully write to the queue.

But, instead, let’s look at how I can automate testing for the Consumer portion of this pattern.

Azure Functions are set up as static methods on a class. As a result, to call my Azure Function from a test, all I have to do is call the function from the class, passing the two parameters the method expects: the message portion of the queue object that triggered the function (in this case, a JSON version of a SalesOrder object) and some object that implements the ILogger interface.

I’ll create the SalesOrder to pass to the function just as I did with the Provider, but I will add one more line to convert my SalesOrder to JSON:

With my mock message created, I can create my mock logger. With JustMock, depending on what I want to test on the logger, I have several ways that I could mock it. I could, for example, track the number of times that any method on the logger is called or capture the messages sent to those methods.

I’ll start with two simpler tests, though: If the code runs as expected, the ILogger’s LogInformation method should be called exactly once and the LogError method should never be called (again, if everything goes right).

The code to mock my logger ends up looking like this:

While I now have the parameters to call my Azure function, I also want to take control of the Entity Framework code inside the function so that I can check that the right data is going to the database (plus, I don’t want my test runs to be adding these dummy sales orders to my database). That requires just three steps.

My first step is to create a dummy collection to be used by my DbContext object in place of the real database:

The third step is to address the two methods that are called inside the function: The Add method on the SalesOrders collection and the SaveChanges method on the DbContext object itself.

The SaveChanges method is easy to mock: I use the Mock class to tell SaveChanges to do nothing. For the Add method, I’ll have Mock swap in a new set of code that adds the SalesOrder object passed to the Add method to my dummy collection, rather than to the database.

With all of that arranging done, I’m ready to call my function, passing my mock SalesOrder and logger. After the method finishes running, I’ll check to see if anything has ended up in my dummy collection:

When this test is put all together, it would look like this:

In my real test, of course, I’d check for more than there being exactly one object in my dummy collection. (Full code for download is here.)

I can now check all of this into source control and add my tests to my nightly build run. My next step is to start thinking about how I’m going to write the integration tests that will prove all this code works together after it’s loaded into Azure (I’ll probably use Test Studio for APIs for that). But that’s another blog post.