Telerik’s Test Studio is a powerful tool for User Interface test and has long supported record-and-playback using Internet Explorer. Obviously, IE isn’t the only browser being used, and adding the ability to record tests in Chrome, Firefox & Safari was paramount for our recent release.

As the Test Studio engineers explored methods of accomplishing this, several factors lead them to determine that the best choice for doing this in-browser work was to use JavaScript and Telerik’s own Kendo UI control set.

All of the controls that the team needed are bundled in one library; this reduced the time and effort reduced in learning how to use the controls. It also to easy development and deployment set up as only one JavaScript file and a single set of CSS files need to and referenced.

The learning curve for the Kendo UI control set is not steep, as all the controls have a similar and simple API. Much of the Test Studio code base could be reused without any extra “plumbing” code to adapt.

From a whole-team perspective, using Kendo UI templates allowed Test Studio designers and developers to work in parallel and have almost no conflicts in .
Here are a few examples of Kendo UI controls in action in Test Studio’s recording surface: 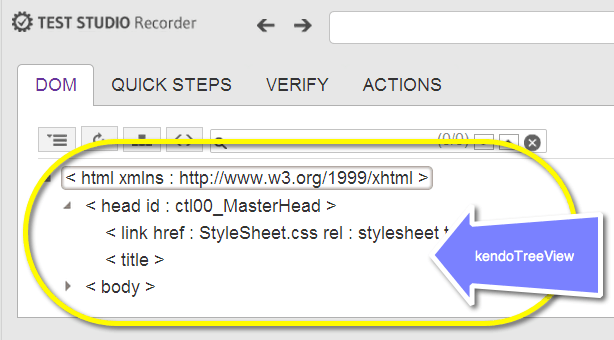 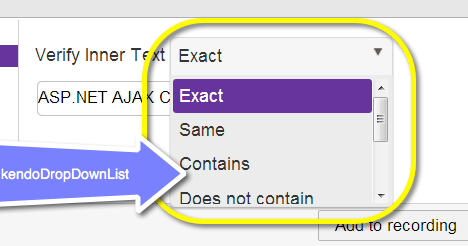 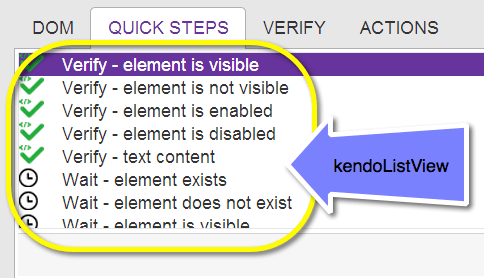 Initial development was done creating a version that had no styling at all and had only a basic feature set, giving product managers and designers a good proof-of-concept and providing the team with a starting point for discussions. After some initial design review sessions, the team changed some of the displayed data and started adding additional items. The developers were very pleased with the framework’s flexibility: “It was really cool that once we had set up the Kendo UI data sources we were able to simply modify the data sources and not have to write any additional UI specific code.” Partway through the development process, the team realized that a switch from kendoGrid to kendoListView would suit their product better, and found that they were able to reuse much of their existing code including the initial data source.

Once the team had agreed on the features and the data to be displayed, the design team really kicked in and started beautifying the UI. Everyone was pleased to find that the designers could work directly the HTML and CSS files only, thus not needing to touch the business logic at all. As one developer said, “This may sound quite trivial and usual, but if the UI framework was poorly designed we would have ended having lot of conflicts and unstable code base.” The Kendo UI controls’ ease and flexibility allowed everyone to concentrate on their specialty while functioning as a collaborative team.

Special thanks to Test Studio developers Konstantin Petkov and Tsvetko Hadjitsenev for their input.
Kendo UI, Test Studio
About the Author

Steven Vore has worked in software support and testing for the better part of  and enjoys exploring ways to make software easier to use. He is a fan of movies and music, and can often be found on Twitter as @StevenJV.