We have a lot of exciting new features available in the Q3 2011 release of OpenAccess ORM.  Among my favorite additions are our awesome NuGet packages. These packages make it even easier to get started building a domain model using OpenAccess ORM’s fluent mapping, or code first, API.

In this release we have added two NuGet packages to the NuGet repository. When these packages are added to a project, it will be configured automatically to work with Telerik OpenAccess ORM Free Edition.  Let’s take a look at these great new additions to OpenAccess. 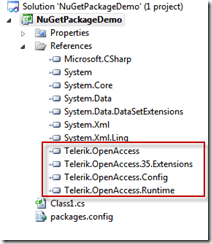 The OpenAccess.CodeFirst.Sample package adds a few classes to the project which help get the basic code first project skeleton set up.  It will also create an example entity, and an example mapping configuration for that entity. 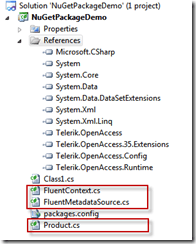 For more information about code first development with OpenAccess check out this documentation section, and this video series on Telerik TV.

The first thing we need to do is create a new Class Library Project.  Once the project is created it is time to add the NuGet packages. There are a few ways to install NuGet packages which I will cover briefly, but a great guide for NuGet is also available here.

The fastest way to add the first package is to open the package manager console and type:

Hit enter, and the first package will be installed.

To install the second package type:

Hit enter and the second package will be installed.

Another way to install the package is to right click on the references folder in the project, and select Manage NuGet Packages:

This will launch the package manager dialog, here you can search for OpenAccess in the upper right, and the packages will show up in the list.  Click the install button on OpenAccess.CodeFirst and it will be added to the project. 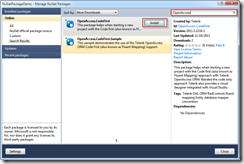 Repeat these steps for the second package, which should be listed right below the first package in the search results.

Regardless of the path you took to install the packages, your fluent mapping project is now ready to be used and abused! :)

These NuGet packages have an additional benefit aside from being extremely helpful for creating a new fluent mapping model.  When you install the package, all of the files required by OpenAccess are dropped in the packages folder.  This leaves the new project’s OpenAccess version completely independent from the version installed on the system! In fact, I wrote this blog without OpenAccess even installed on my system. :)

We hope you guys find these NuGet packages helpful additions to your toolbox when working with OpenAccess.  Stay tuned for more upcoming blogs about all the great new features we packed into the Q3 2011 release!