Jen recently visited Amsterdam to attend a pair of conferences. Read on to hear her fun-filled report from the Frontend Developer Love and Vue.Amsterdam conferences.

I was lucky enough to help represent Progress by attending two back-to-back conferences in Amsterdam on February 15-16: Frontend Developer Love on Thursday, and Vue.js Amsterdam on Friday. Both conferences were impeccably organized in a stunning venue in one of the most beautiful cities in the world. As a seasoned traveler who is picky about venues and with a decided penchant for French destinations, I found myself swept away by the charm of Amsterdam, staying in a houseboat I found on AirBnB that was well-stocked with chocolate and stroopwaffels. 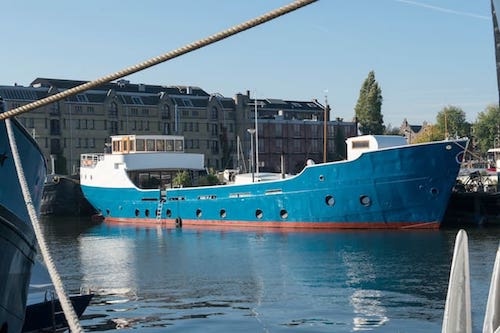 I was there to give two talks. One was a comparison of NativeScript to other similar mobile app frameworks. The other showed off our new NativeScript-Vue integration, a community-built effort to enable Vue.js developers to use NativeScript in a similar way to how Angular developers can currently use their framework of choice to build mobile apps.

Kamen Bundev discusses how we use Vue.js internally at Progress to build Sidekick

Plamen Zdravkov also did a talk on Kendo UI's Vue.js integration. Progress was the sole Platinum sponsor for both conferences and we had a well-placed booth that was staffed by myself, NativeScript and Kendo UI engineers from Bulgaria, and Progress staff from the Rotterdam office. Props to these hard-working folks who put in long hours speaking to clients and potential partners.

The conferences took place in the Amsterdam Theatre in the West area of the city on the waterfront. The venue was a gigantic wrapped-screen movie theater with surround sound, it was absolutely stunning and used to its full extent by the organizers to create an entire sound-and-light experience for attendees.

Luke and Marvin, conference organizers, discuss the challenges of creating such a huge conference

The conference organizers managed every detail for the speakers and sponsors. Speakers were allowed to choose their intro music. We were gifted goodie bags filled with Gouda cheese, custom-designed sneakers and stroopwaffels. The speaker dinner took place on a cruise along the canals—a magical experience! There are days when you thank your lucky stars that you're a Developer Advocate, and this was one! 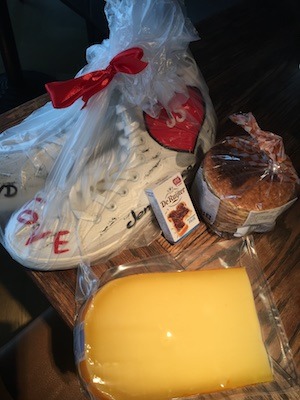 We were happy to host Developer Experts Rowdy Rabouw, Tiago Alves, Igor Randjelovic and our good partner Eddy Verbruggen, who helped me immensely with my Dutch language skills (more on this below). Igor is the college student in Hungary who is responsible for creating NativeScript-Vue and it was a great pleasure to meet him! 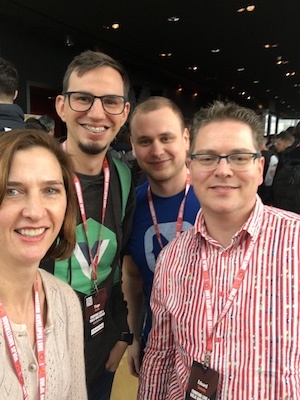 This day was devoted to all frontend frameworks and hosted about 900 developers in the audience. Talks ranged from Angular to React to Vue.js and many other topics of interest to frontend JavaScript developers. My talk was last, and I gave a Dutch cheese-themed talk demonstrating a master-detail cheese-display app that I built in Ionic, React Native and NativeScript to compare the differences between the frameworks. This was a fresh talk I crafted for the conference after discussing with the conference organizers what these primarily web-oriented attendees would like to see from a talk on mobile technologies.

This was the 'showcase' conference, and about 1,200 attendees packed the theater from front to back. I split my time between speaker preparation and interviewing Vue.js creator Evan You and other conference attendees at the booth.

Igor Randjelovic and Tiago Alves discuss the creation of NativeScript-Vue

This conference was very important to me, as we used it to launch both Vue Vixens (my initiative to introduce more women to frontend programming via Vue.js) as well as to launch NativeScript-Vue 1.0.

Talks were very high quality, with beautiful slides reflective of the interest this community takes in clean design and well-crafted storytelling. Evan You kicked off the day with an exciting keynote in which he discussed some of the new things we can expect in the Vue CLI. He also talked about some of the other projects being built in the community—he surprised all of us when he mentioned the 1.0 release of NativeScript-Vue!

Of the other talks I was able to hear, I was particularly struck with Eduardo San Martin Morote's demo of animations using his library, Vue-Tweezing. I also loved the talk from Ives Van Hoorne, another amazing student who built CodeSandbox.io, which I will definitely be using for Vue Vixens!

My talk became a series of celebrations, first in formally introducing Vue Vixens and then demoing Elocute, the app that I built for the conference. As a former language teacher, I always wanted to build an app that would change the way teachers use the infamous language lab to test students' spoken accuracy. With Elocute on the web, a language teacher can log in and manage the classrooms for which they create texts to test elocution and verbal mastery. Their students then get the assignment on the mobile app and repeat the text orally, using the speech-to-text plugin to transcribe the spoken utterance. An algorithm behind the scenes calculates their accuracy and provides a score. The mobile app leverages the new NativeScript-Vue integration and is a good way to demonstrate the similarities between the web and mobile code. 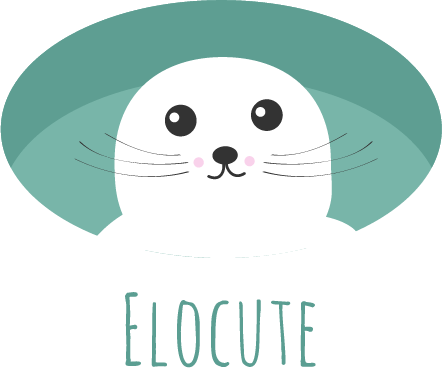 Vue Vixens garnered a solid round of applause. I didn't realize how obvious it is to the audience that 1) we have a diversity problem, even on the frontend and 2) Vue.js is a perfect framework to introduce concepts of frontend programming in a clean and beautiful way to new developers. A good deal of social media buzz was generated by the announcement; our next appearance will be at the Vue US conference in NOLA in March where, in conjunction with the organizers, we’re offering five free tickets to the conference for foxy underrepresented people. We'll also host a Vue Vixens breakfast there with some mini workshop activity. We have committed to a full-day workshop at the We Rise Conference in Atlanta in June, and have an open invitation from Vue NYCand potentially a conference in Vancouver. We'll also do workshops in the fall in Atlanta at Connect.tech. The workshops will use CodeSandbox.io and the NativeScript Playground during a full day of web and mobile programming for beginners.

After I discussed the making of Elocute, demoing the mobile app with a fun Dutch transcription test (I don’t speak Dutch, but Eddy coached me!), I called Igor Randjelovic up to the stage to make the launch official. And now the fun begins! We had many questions asked on the #vue channel in Slack, many supportive tweets, many more stars for Igor’s Github (his repo started trending) and just a ton of love and support. Most interestingly, Igor and Tiago talked with Evan about integrating NativeScript-Vue into the Vue CLI, and work has already begun in the community to make this a reality. Work continues on making our code-sharing story watertight.

In summary, this set of conferences were some of the most rewarding I’ve ever attended. The Vue.js community is supportive and excited about our project, even though they are primarily web developers. It's great to have the privilege of being able to nurture a community effort from zero to the point where they can launch a product from the platform we have provided. Are you as excited as I am about building mobile apps with Vue? If so, visit NativeScript-Vue.org and join us 'Vuelievers' as we forge ahead! And if you are interested in supporting Vue Vixens, join our skulk at Vue Vixens!

Here are some tweets from the day:

The Guide to PubSub (Publish/Subscribe)