Using Google Spreadsheets as Data Source in Your Android App


In this blog post I’ll show you how to use a public Google Spreadsheet as data source in your Android application.

Google allows you to treat any public spreadsheet as a table in a database by using the Google Query Language. This language provides an easy way of interrogating a data source and pulling back the results of the query as JSON response or an HTML table.

Normally, you'd access a Google Spreadsheet through a url similar to the one below:

If you want to get the same spreadsheet as a JSON response, you'll have to use its key to construct a URL as shown:

As you can see, it is not a ready-to-use JSON and a little bit of work is necessary to make it compatible with org.json.JSONObject. Nevertheless, once the unnecessary parts are trimmed, you’re left with a JSON object that contains all the rows and columns of the spreadsheet.

In addition, the Google Query Language offers server side filtering through SQL-like statements but that would be covered in another post.

The AsyncTask class provides a way to do that by exposing two important methods:
Following is the class I use to download the contents of a Google Spreadsheet.

Once the JSON string has been downloaded and is in compatible format, it can be used to create a JSONObject.

The JSONObject then can be traversed in order to create the application's ViewModel. For this particular example, I have a class called Team with the following fields:
The final result can be seen below. 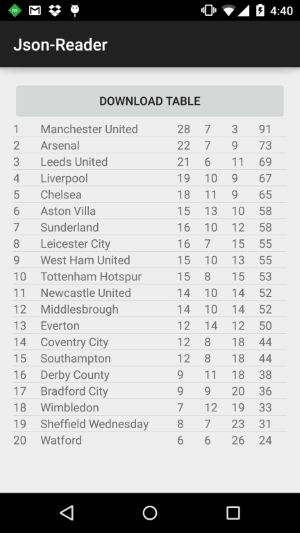