Decompile with a Bang!

It is hard to believe that less than year has gone by since we officially released JustDecompile. This is the second release cycle since that time, and we have added features worth celebrating!

C#5 and WinRT is Fully Supported

At Telerik, we follow all the new developments in the .NET world. Therefore, it should be no surprise that JustDecompile supports the new version of C# (including the new async and await expressions) and the Windows Runtime cross-platform application architecture in Windows 8 (WinRT Metadata).

Appx is a package similar to a XAP file, and opening one will expand all supported assemblies contained within the package. This will likely include WinMD files containing WinRT types.

We have enhanced the code viewer in JustDecompile with code outlining, similar to the outlining found in Visual Studio. It even supports the same commands to collapse and expand regions: Ctrl+M+O/L.

One popular request we received since the last release was to allow searching for text in the code viewer. Now, when the code viewer has focus, Ctrl+F will bring up a search box similar to the one found in Visual Studio 2012 . You can move between results using the navigation buttons in the search box or by pressing F3 to go to the next location.

We are continuing to work on the code viewer’s functionality, and you can expect even more from us in future releases. If you would like to affect the evolution of the code viewer, consider leaving us ideas or suggestions at the JustDecompile UserVoice. 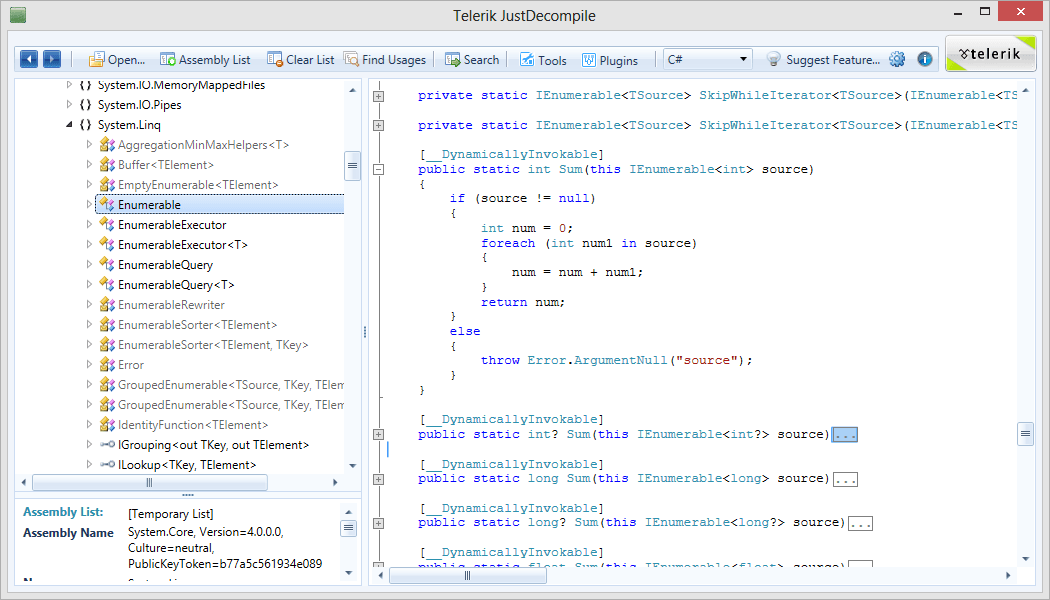 You already had the ability to open an assembly in JustDecompile from the Windows Explorer context menu, and we have improved this to handle multiple file selections. The typical scenario is that you are working with assemblies in a common location, and you need to load them into JustDecompile at the same time. Using the Open in JustDecompile option in the Windows Explorer context menu will open a new instance of JustDecompile and add the selected assemblies to the assembly list. You can then save this list with the Create Assembly List option in the Assembly List menu or by pressing Ctrl+S.

Besides optimizing the decompilation engine, we also changed JustDecompile’s build and deployment. We now package JustDecompile in a single executable, speeding up installation and start time.