The new version of Astoria has some very useful and powerful features. They include projections, data binding, row count, feed customization, server based paging and better BLOB support. There is one small issue, in order to support these new features you have to tell the framework you are using the new version of Astoria. For backward compatibility reasons, by default Astoria will work in “1.0” mode and none of the new features will work out of the box. To take advantage of the 2.0 features, you have to make two minor changes to the InitializeService method:

I want to take advantage of my favorite new feature, the inline row count. (I have been asking over and over for this feature, so: Thanks Astoria team!!!) The inline row count will return the number rows in the data feed regardless of paging ($skip, $top etc) as an XML element: <m:count>. This new property makes our RAD Grid and other paging aware controls much easier to perform paging. To make this work, you just add the inlinecount to the querystring:

Let’s implement this with the example I did the other day using Telerik OpenAccess and the Data Service Wizard. If you remembered I built a simple Astoria 1.0 service exposing the Customers entity. We built this using “Astoria 1.0”, however, I upgraded my machine with the release of Astoria 2.0. When I use inlinecount, I get a 404 error. As with a brand new service, we have to tell the framework what version of Astoria we want to use before we can take advantage of inlinecount. I made the same changes as I did above (DataServiceConfiguration and MaxProtocolVersion ) and reran my application. Now when I type this URL: http://localhost:1191/WebDataService.svc/Customers?$inlinecount=allpages&$top=2

I get only the top two records but the total count of records. 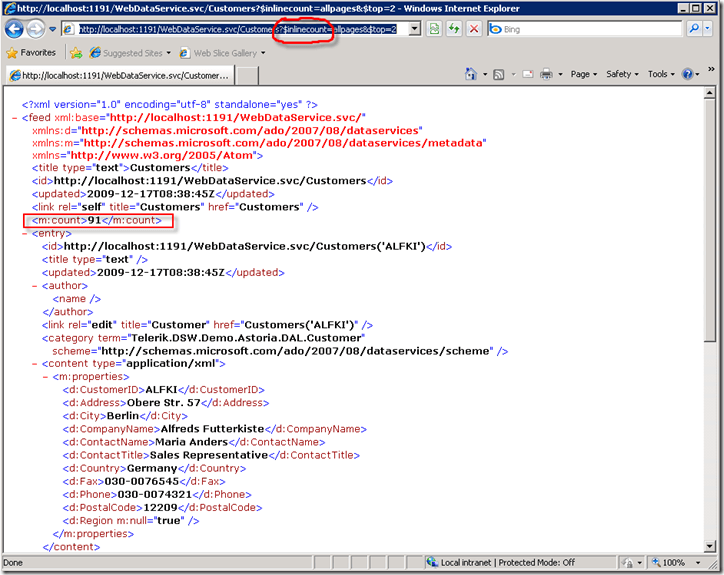 I thought that this was called “WCF Data Services”? According to the Astoria team blog:

Since this release is an update to the .NET Framework 3.5 SP1 we kept the name consistent with what was used in the 3.5 SP1 timeframe so that printed documentation, etc is consistent.  Going forward in .NET 4 and onwards you’ll see us use WCF Data Services.