GridView is one of the most powerful out-of-the-box controls in Windows 8, but fully understanding how to use it is not necessarily trivial. 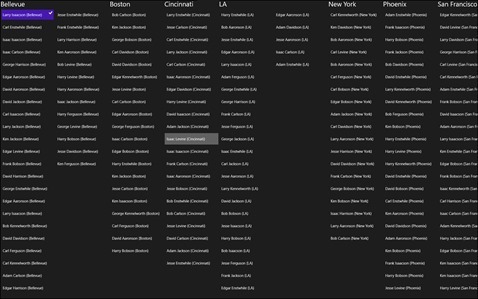 Getting started with GridView is nearly trivial, as I showed in this article.  Today, we’ll take a look at a more realistic use of GridView however, one that displays groups of collections, and that is not trivial.

Let’s assume that our data consists of people, with each person having a first name, a last name and a city.

We’d like to display these people in a GridView, but organized (grouped) by city.  The trick is to create a Group class that will allow you to have a key on which you’ll group the people (in this case city) and a list of people who match that key,

To generate your initial (ungrouped) list of people you might go out to a service, or read in XML, or in our case, you might generate names and cities at random. To do so, we’ll have three arrays,

And you’ll need a method to generate a given number of people randomly mixing names and cities,

Let’s turn now to the view.  In MainPage.xaml you’ll add a GridView control which will bind its itemsSource to a CollectionViewSource.

Within the GridView itself we want to determine how the groups will be organized, and for that we use the ItemsControl.ItemsPanel,


Next we want to determine how each group will be laid out. This consists of two templates: one for the header and one for the items themselves.  The Headertemplate will, in our case, display the city which is, you’ll remember the Key property in the Group
class.
<ItemsControl.GroupStyle>
<GroupStyle>
<GroupStyle.HeaderTemplate>
<DataTemplate>
<TextBlock Text="{Binding Key}"
FontSize="26.67" />
</DataTemplate>
</GroupStyle.HeaderTemplate>

In the code behind I generate the 200 people into a list and then use a LINQ statement to obtain a list of Group objects, which I set as the source for the CollectionViewSource,


The net effect is the gridview shown in the figure at the top of this posting.

Jesse Liberty has three decades of experience writing and delivering software projects. He is the author of 2 dozen books and has been a Distinguished Software Engineer for AT&T and a VP for Information Services for Citibank and a Software Architect for PBS. You can read more on his personal blog or follow him on twitter