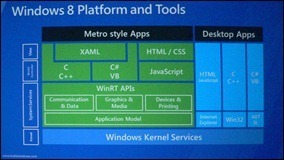 While there is no reason to be absolutist or pedantic about these differences, if we are going to communicate effectively we need to understand the fundamental differences.

Thus, I offer the following simplifications to get us started…

Windows 8 is an operating system, the successor to Windows 7.  There are numerous ways to create applications for Windows 8, and in fact there are now two classes of applications: Metro Style Applications and Desktop Applications.

Desktop Applications are exactly the type of applications that were built for Win7 and, in fact, Win7 applications will continue to run on Win 8.

Metro Style Applications are immersive, chrome-less and distinctive in appearance.  There is much to say about what goes into Metro-style (one word? hyphenated? two words?) applications but what is clear is that they are built on top of WinRT and are distinguishable from Desktop Apps.

Metro is a design style, originated for Windows Phone and now carried over to Metro Style applications on Windows 8

WinRT is a set of APIs used to create Metro Style applications that will run on Windows 8.  WINRT supports development in C++, C#, VB.NET and Javascript.  WinRT itself is an unmanaged native API, giving excellent performance. For more details see the Wikipedia entry.

Any simplification of this magnitude will cause some distortion.  If I’ve said anything that gives you apoplexy, please feel free to leave a comment.

Jesse Liberty has three decades of experience writing and delivering software projects. He is the author of 2 dozen books and has been a Distinguished Software Engineer for AT&T and a VP for Information Services for Citibank and a Software Architect for PBS. You can read more on his personal blog or follow him on twitter