This post is part of a series of blog posts and videos about the Task-It (task management) application that I have been building with Silverlight 4 and Telerik's RadControls for Silverlight 4. For a full index of these resources, please go here. One of the posts listed in the index provides a full source download for the application.


In a recent Ask the Experts webinar I showed a simple solution that had similarities to one that I had used in my recent MVVM post, but had a few extra twists on it. I have since been asked if I could post the source code for this demo, so here it is (I am using similar techniques in my Task-It application).

In the MVVM post I had set it up so that clicking a row in the RadGridView would put you into form view, where you could edit the selected record, and clicking Save would put you back into the page with the RadGridView (with any changes to the record saved via to the database via WCF RIA Services). In this example, rather than simply clicking on a RadGridView record to put it into 'edit' mode, there are actually two different ways to do this.

1. Double-click on the desired record in the RadGridView.

2 Right-click on the record, then click the Edit item in the RadContext menu: 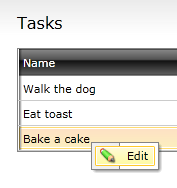 In the upper-right part of the screen I also provide the ability to choose between two of the out-of-the-box TransitionTypes that comes with the RadTransitionControl. I would not normally include this in a user interface...it is just there for demo purposes:

Naturally I'm using a RadComboBox as the control that allows you to choose between the two types.

The Slide and Zoom transition may look familiar, as that is what has been used in our Silverlight demos for quite a while. I remember first seeing this a while back (before I was a Telerik employee) and wanting to use it in my app but not knowing how to do it. Well, with our Q1 release, now you have it!

If you haven't read my MVVM post yet, I highly recommend that you check it out, as I will be using the MVVM pattern in this post, and probably every one that I write in the future.

The RadTransitionControl's Transition property is bound to the TransitionType of the SelectedTransition in our TasksViewModel (I'll explain this a bit more later):

In TasksViewModel you'll see that, in the constructor, we do several things:

We already saw how the RadComboBox displays two transitions, so let's see where that comes from...

The first line loads the transitions (we'll look at that next) and the second line sets the first of the records returned as the SelectedTransition via LINQ (using its First method).

The transition records come from a hard-coded list that I've created in the Transitions class (under the Models directory):

The first property, Name, is what will display in the RadComboBox. I get these string from my Strings.resx file, in case I want to display them in another language at some point in the future.

The second property, TransitionType, is what the RadTransitionControl needs in order to know which effect to use. Notice that I instantiate a FadeTransition and a SlideAndZoomTransition.

Back to our RadComboBox, remember how we bound the Transition property to SelectedTransition.TransitionType? Now you can see that when a selection is made it is selecting one of these two Transition objects, but the RadTransitionControl needs to grab that object's TransitionType value.

By the way, you may be wondering why I did an override of the ToString method on this class and return the value of the Name property. I prefer to use this technique so that when I bind the objects to something like a RadComboBox I don't have to set DisplayMemberPath=Name.

If you do not set DisplayMemberPath on a control like a RadComboBox it will display whatever the object's ToString method returns, which by default is the full name of the object. In this case it would be MVVMProject.Models.Transition. I like to keep my XAML as clean as possible, so I prefer doing this over setting the DisplayMemberPath property (which is not strongly-typed).