TypeScript is being used everywhere from our own internal projects, like NativeScript and AppBuilder, to adoption by Google in Angular 2. It should come to no surprise that JavaScript is going to be hard to avoid in the future. But what exactly is TypeScript, how do I use it and what are the added benefits?

TypeScript is a typed superset of JavaScript that compiles to plain JavaScript. It works everywhere and is open source. It offers classes, modules, interfaces and more along with powerful tooling such as static checking, refactoring and statement completion. The easiest way to learn more is to read the language specification guide or follow the official blog.

That is it and your system is ready to run the latest version of TypeScript. But which IDE or editor can you use? Thankfully, you have a vast variety of options besides Visual Studio such as Sublime Text, WebStorm, Visual Studio Code or even the web browser playground. There are other options, but for this tutorial we will be working with Visual Studio 2015.

The Compiler and TypeScript Definition Files

If you're using one of the supplied IDEs or editors mentioned earlier, then you won't have to do this step, but it is good to know.

You can compile a TypeScript file to a JavaScript file with the following command.

A file called script.js will be created in the same folder that you ran tsc. If you would like to see a list of all commands currently available, then use 'tsc' as shown below:

This will give you the version number of TypeScript installed and some examples on the sytax. Take note, that by using the --out parameter as shown above you can compile multiple TypeScript files into a single file. This is the only command that I manually run since using TypeScript and one that might help you.

Statement Completion (or IntelliSence in the Microsoft World) can come in very handy when writing your web app. Thankfully, TypeScript already supports this for standard syntax, but what about third-party libraries such as jQuery, Angular, Backbone and more? Wouldn't you like Statement Completion for those libraries as well? Gratefully there is a Github repository with type definitions for the most common JavaScript libraries.

How do you use them?

We are going to use the Standard jQuery library as an example. Navigate to this repo and download the jquery.d.ts file. Add it to your project along with the latest jQuery build. Open up a TypeScript file and add the following code:

Add a HTML page and include the following code inside your body tag.

In the TypeScript file, we reference our definition file first downloaded from the GitHub repo. Then we declare var $ to the JQueryStatic interface (more on this later). This will give us code completion throughout this TypeScript file. Next, we use the familiar $ syntax from JQuery to get an id on our HTML page (called greet) and add a click event handler to it. Once the page loads and we click the button, the alert appears.

In this example, we added code completion to a third-party library and used familar jQuery syntax in our TypeScript file! Let's switch to Visual Studio and start our first project.

Regardless of which IDE or editor you have installed, we are going to take a look at how TypeScript would benefit our development team. However, in these examples, I'm going to be using Visual Studio 2015.

Before proceeding, I'd recommend installing "Web Essentials 2015" as it will make working with web projects much easier.

To get started, select "Other Languages" -> then "TypeScript" and finally "HTML Application with TypeScript". If we look at what Visual Studio 2015 stubbed out for us then we will see the following : 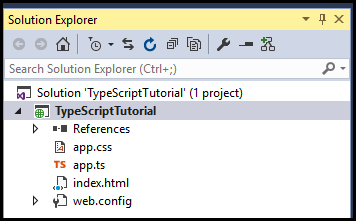 Using Visual Studio, it will automatically create a local web server, compile the .ts (TypeScript) file to JavaScript and load the index.html when you press the run button. Go ahead and run it and come back to the solution.

You will notice the generated JavaScript file is not showing up under the solution. Select the project and click the button that says, "Show All Files" as shown below: 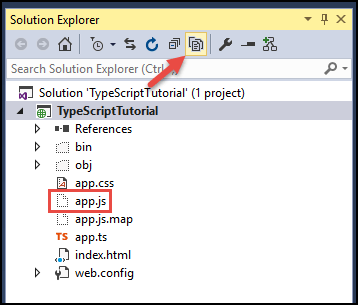 We could use the --watch command as shown in the "Compiler" section to update this file automatically, but we'll keep things simple for now.

Our development environment is setup correctly, now for our favorite part - coding!

Let's Get to Work! - Syntax Basics

Before we can dig into TypeScript, let's start with some of the basics. Open your IDE or editor and type the following two lines.

By reading the comments, you can see that we are using Type Inference in the first example and Type Annotation in the second since we used the : string annotation.

The same thing can be said with numbers, booleans, arrays, etc.

But what if you declare a variable and don't set any data like the following?

You will see that it is of type "Any". These are types of variables that we may not know when we are writing the application.

Later on in our application, we could change the type:

If we evaluate the something variable, after the code has been executed, then it will evaluate to 100.

We've already been working with optional typing, so we just need to start tying it together with a function to see the full potential. If we add the following function, we can see that it is looking for a string to be passed in. It will return "Michael Crump" after the method is called.

As we typing out that function, we get code completion. 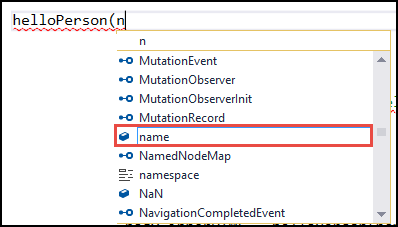 Let's create another function called addNumbers and pass in the following parameters without specifying the type.

The result would be : "MichaelCrump100". This clearly isn't what we were looking for, as we wanted to add two numbers together.

If we revised our code sample and added the type (as shown in yellow below), then it would have caught the error in the IDE rather than concatenating a string and a number as shown earlier. Below is an example of what this looks like in the browser:

If we change "name" to a number (such as the following), then we won't see an error.

We have used an interface already in the TypeScript definition file, but let's look at how this could be beneficial with creating our own. In short, interfaces describe a type. While classes and functions deal with implementation. Interfaces help us keep our programs error-free in the IDE or editor by providing information about the shape of the data that we are going to work with.

Add the following code in your TypeScript file:

Again, we can see syntax highlighting and code completion as well as the ability to tell what type you are using. It will automatically correct errors on the fly.

By default a mapping file is created that allows us to debug your TypeScript application. If you look in the folder where our .ts and .js reside, we will find a .map file. Let's go ahead and put a break point on the return line and we can inspect the locals window to see what the value of the properties are at run-time. 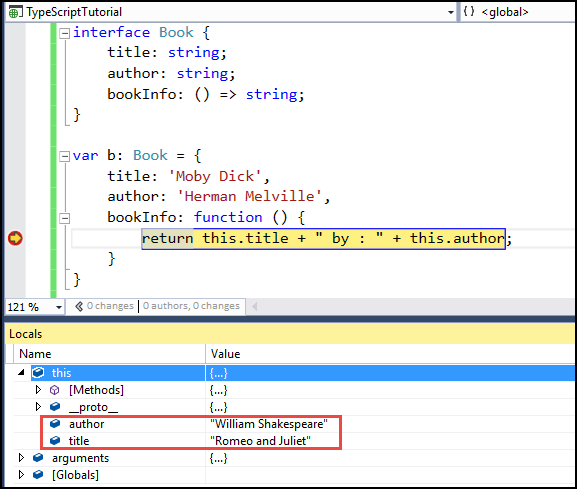 You can think of classes as containers for different members of your application. These contain fields, constructors, properties and functions. Let's extend the Interface we created before to use a class.

The interface code is identical, except now we have a container called, "MyBook" that implements Books. In the last line, we instantiate our MyBooks class that conforms to the interface we created earlier. If we run the application, the same result is displayed, but in a cleaner way.

The source code for this article can be found here

Keep Calm and Learn on!

There is so much to TypeScript that it can be overwhelming at times. I know that is how I felt as I started learning TypeScript and reading the language specification guide. Hopefully, this post is enough to get you started in the right direction without sifting through pages of documentation and looking at outdated code samples. I hope I've sparked your interest in TypeScript. So what are you waiting for? Try it out now!