The Telerik TechEd 2008 Crew is finally back!

After more than fifteen hours of flights across half of the world, I finally had a chance to get some sleep. After a few cups of coffee, I am finally catching up with e-mail and everything else that happened in the office during TechEd.

It was a great week and I want to say a big “THANK YOU” to all of you who attended the Telerik booth at TechEd 2008 in Orlando. The positive feedback we got from you guys was incredible! It was great fun to see how many people were wearing .NET Ninjas and Geekettes and I was really surprised to discover that some of the attendees were wearing even our last year .NET Superstars and Geekettes v1.0. :-) If you didn't manage to get a Ninja or a Geekette please stop by to see us at PDC conference in LA later this year! We won’t let you down - I promise ;-)

The event was a great success. Our new booth was really cool and shiny and attracted a lot of attention.We had a really nice dinner with Microsoft guys from the MSDN team which implemented RadEditor, RadChart and some other Telerik ASP.NET AJAX controls and Steven Forte (our Chief Strategy Officer) was invited to have lunch with Bill Gates.

Despite the fact that there is not much adoption for WPF and Silverlight yet we had huge success with our Resort Explorer and Snowboard Store demo applications. What was most striking for me was to see how much traction we got for our Winforms stuff and for our Reporting product. While we were late entrants into those two markets, it seems that many of our customers are already using our tools and, what’s most important, are very very happy with them. I guess everyone’s going to get even more excited once we release everything that’s in store for 2008.

People were really excited by the new RadControls for ASP.NET AJAX (former Prometheus) and we received lots of compliments for their blazingly fast performance, style, slickness and convenient API. I had most fun demonstrating the client-side capabilities of RadGrid and some of the other controls. In fact, everything was happening in real-time like in a desktop application and a few customers were wondering whether anything happened at all? It was just after a second look at the app that they saw that the data had actually changed. From all conferences so far, this one we got the most positive feedback about the quality of the products, documentation and support. Knowing that we are going in the right direction, after TechEd 2008 we will be even more motivated to continue delivering the most capable products on the market.

A HUGE THANK YOU and stay tuned - more will come! 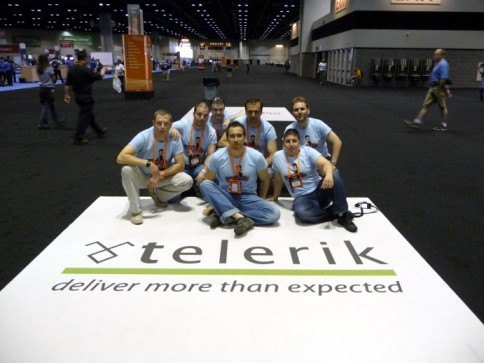