I admit that I have had the familiar AdBlock extension ("Chrome's most popular extension!") enabled on my web browser for a long time now. It was actually shown to me originally by my daughter, who found ads disruptive to her internet usage.

For kids, the option to not see ads is one of the main requirements in the mobile app stores - if you want to classify your mobile app as 'made for kids' it has to be ad-free. So it seemed normal to me that we should have the option to turn off ads for her. Pretty soon I turned them off for myself when I saw how much cleaner web pages became. 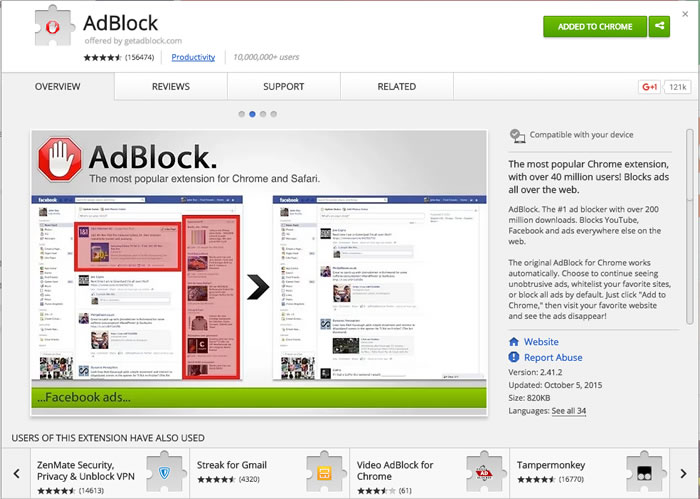 My opinion began to change somewhat when I started working at a small company that relied on ad revenue. I also moved my own mobile app portfolio to free with AdMob integration and launched a few side projects with ads implemented on the web pages. Suddenly, I started to really pay attention to ads on the web and on mobile.

While it's quite clear that, today, ads are the major contributor to cruft on the web, it's far from clear what we should be doing about it.

The Ethics of Ad Blocking

It's surely your right to say, "I don't want to see this junk" and to block it using a handy app or extension. But what about the small businesses and blogs that rely on that ad revenue? Recently I have seen some sites integrate heartfelt pleas asking users to disable AdBlock:

Clearly for those businesses whose revenue model for delivering web content depends on ads, ad blockers can be catastrophic. Unless a different model becomes available, it seems inevitable that many small publishers will go offline, unable to support the costs of doing business on the web.

But what about the costs to consumers of ad-supported digital content? A recent New York Times article demonstrated how dramatically ad blocking software speeds up the browser on mobile.

The results: For a number of websites that contained mobile ads with a lot of data, web page data sizes decreased significantly and load times accelerated enormously with ad blockers turned on. The iPhone’s battery life also improved — but more modestly — with ads removed. 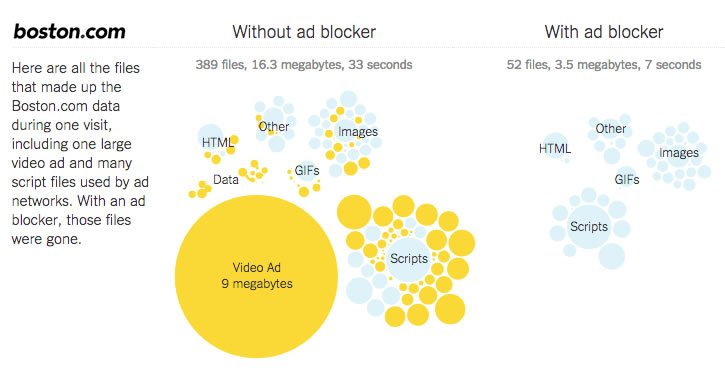 Since mobile phone users are often concerned with conserving pricey data plans and avoiding overage costs, it seems clear that installing an ad blocker will 1) save you money by not consuming as much data and 2) save you money by not draining your phone's battery life. Who wouldn't want to reduce phone wear and tear and avoid overages?

Still, as my mother might have said, ad blockers "rob Peter to pay Paul." Aren't web consumers stealing content by not supporting ads? Aren't ad publishers stealing from consumers by expecting them to use their own expensive data plans to download blocks of content they don't even want? And what about the big players in this arena, Apple and Google?

In a recent interview on NPR, tech reporter Aarti Shahani noted the importance of Apple's recent decision to allow ad blocking mobile apps to be available in the Apple app store for use on the mobile web. He saw it as a "shot directly at Google" as "90% of Google's revenue" (and a comparatively small part of Apple's revenue) depends on these ads.

The fallout has been enormous and will probably only become more dramatic as more and more content is demonstrated to be superfluous on the web. As John Gruber notes, "With Safari Content Blockers, Apple is poised to allow users to fight back. Apple has zeroed in on what we need: not a way to block ads per se, but a way to block obnoxious JavaScript code. A reckoning is coming."

So far, we haven't seen the option to block ads in mobile apps distributed through the app store. One ad blocker targeting ads on mobile apps did sneak through but was quickly removed as this would clearly cannibalize Apple's iAd business model. But I predict that Apple will step away from this model in the future and mobile app developers will have to reexamine the ad-supported freemium model entirely.

With so much content consumed on mobile devices, this new toolset available to iOS users is, depending on your perspective, either a godsend or a can of worms. Yes, you can block stuff you don't want to see from third parties. But coming soon, to a phone near you, will be more fine-grained blocking, including blocking various scripts and fonts, in order to streamline and customize the mobile experience.

Soon, users may be able to control what pieces of the web content you produce will be viewable to them, what functionality will work, and what will be turned off. The fully customized web experience appears to be on its way, and it's a scary thought to companies who insist on pixel perfection or inflexible designs that rely on heavy doses of JavaScript:

With the hype for iOS content blockers, and how prominently they offer font & JS disabling, we may see more JS-disabled users now than ever.

JavaScript developers need to read the writing on the wall. Go lightweight or risk being blocked.

What about the situation on Android? Surprisingly, I could find ad block apps on Google Play. But Google has a history of pulling ad blocking apps, including AdBlock Plus, so Eyeo has created an ad blocking browser, downloadable on Google Play.

Dean Murphy, a solo developer in the UK, recently hit a home run with his app Crystal, which was the #1 ad blocker in the iOS store for a while. It was reviewed by several prestigious news outlets as a game changer for the industry.

You can hear about his experiences as a solo developer with a number-one app in a controversial category here.

Enabling @_CrystalApp for Safari on iOS is the online equivalent of going from a spinning hard drive to an SSD. Yes, it’s that much quicker.

While the number of downloads of Crystal has proven its worth as a valued addition to the app store, Dean encountered enough negative feedback by frustrated content producers and users concerned over his business model that he temporarily bowed out of Twitter:

Still a lot of mis-information being spread. I’ll just post this once more and take a break from Twitter for a bit. http://t.co/OKj1sUZTif

Facing similar backlash, the creator of another ad-blocking app, Peace, removed it from the app store. He felt that we need to take a more nuanced approach to blocking content that pays the bills of the developers and content producers.

In his article, Dean discusses his coming enhancement to Crystal to include a user-defined whitelist and 'acceptable ads'. Acceptable ads are a list curated by the app and its partner, Eyeo, built from user-submitted domains. This strategy allows ad publishers to whitelist their domains and pass through the ad blocker, while still also allowing consumers to block them ad hoc.

The ethics of this new model, of course, has also been hotly discussed. But Crystal's evolution from 'hatchet job' on ads towards a more nuanced blocker seems like a positive step towards satisfying the needs both of publishers and consumers. But it still begs the question - do people want to have such a manual process to control what they see on the mobile web? Do consumers want and/or need a middleman to determine what will be shown? Will ads remain a viable source of income for publishers?

People hate ads. This includes many of the developers and content creators who use them.

The two worst reviews I have personally received from my mobile apps have both involved ads, specifically the inclusion of full-page interstitials and objectionable ad content over which I have no control. I would infinitely prefer a better way to monetize my mobile content. Paid apps are the easiest, but few people are willing to pay for apps nowadays.

A better way to monetize content on the web may be to utilize services such as Kiip's 'rewards' system or SessionM's 'mPoints'. The Yoga Studio app (one of my very favorites) uses Kiip rewards brilliantly, while Sworkit uses both Kiip and mPoints. If you opt into the Kiip service, after you do a few sessions in the app, you are rewarded with a 'real reward' such as a coupon for an item you might actually buy. It's pleasant, it's non-obtrusive, it's targeted, and you opt into it.

Personally, I think this offers a direction for the future and I'm happy to see that Kiip now has an SDK for the web. Since it's integrated with a few lines of JavaScript, it might be blocked by an ad blocker, but a notice could still be shown on the site encouraging users to opt in. In this way, users would know what to expect from a website visit - an opted-in scenario, not a series of unwelcome 'pushed' content.

What will be your strategy to monetize your web, mobile, and mobile-web content going forward in the age of ad blockers? How will these new products impact the way you architect software? Share your thoughts in the comments.