Ten Years of the Imagine Cup


The Imagine Cup is a worldwide software design student competition sponsored by Microsoft. Students are given a theme at the beginning of the school year and form teams in their university to build a project that is they can bring to market. The competition is about business viability as much as using the latest super cool technology. So students have to be the right blend of entrepreneur and geek. The competition has students compete in regional competitions and then have to win the right to represent their country in the worldwide finals. Last year the winner was “Team Hermes” from Ireland and they went on to start a business based on the project. The Imagine Cup is truly a transformative thing for those who participate.

This year there are 350 finalists from 75 countries on 106 teams. The finals start today in Sydney, Australia, and I am lucky enough to be one of the 56 judges evaluating the teams. I spent the afternoon Friday at the venue with the teams and fellow judges and attended the opening ceremony and am equally excited as the students. I’m even more excited since I was a judge at the first ever Imagine Cup ten years ago in Barcelona, Spain. 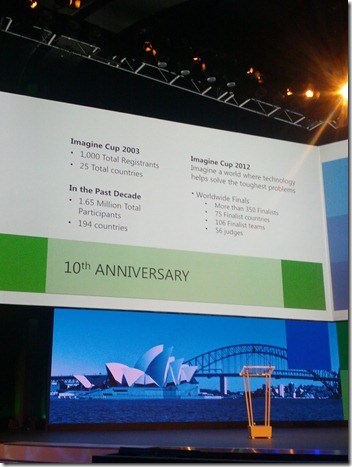 The first Imagine Cup was a truly inspirational event. The excitement of the students was amazing. Since the Imagine Cup was very small back then (only 15 finalists), it was held the day before TechEd Europe, so the students attended TechEd as well.  I got to know them well during the week at TechEd and always wonder how many of them stuck with entrepreneurism. I always look back and say that Imagine Cup 2003 was the single most rewarding community event I have ever volunteered for.

In the past 10 years a total of 1.65 million students have participated from 194 countries. I wonder how big it will be 10 years from now (and if they will ask me to be a judge again.