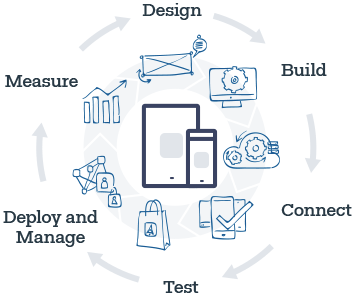 The Telerik team is announcing today the most significant update to the Telerik Platform since its introduction. The update brings support for writing native apps using a new cross-platform framework called NativeScript™ that is available within the Telerik AppBuilder as a preview to a limited set of users (you can request access below).

The AppManager, our app management and distribution tool is also officially released featuring both a new email-based and mobile web catalog distribution options for your apps. In addition, making its debut today is AppFeedback, a new in-app feedback tool that allows you to get actionable feedback from your mobile users straight within the Telerik Platform - all packed within a single update.

The existing products are also delivering a ton of highly requested features by the Telerik community such as: TypeScript support for AppBuilder projects, Mobile Chrome Apps, Windows 8 Push Notifications and CDN support for Files, easy way to manage Kendo UI updates and many more.

Let's go over the list of improvements that made it in this major update:

The NativeScript framework enables developers to use pure JavaScript language to build native mobile applications which will run on all major mobile platforms - Apple iOS, Google Android and Windows Universal. The application's UI stack is built on the native platform rendering and layout engine, using native UI components. NativeScript is also providing a full native API access by using JavaScript. You can request access to the product here.

This release of AppBuilder brings support for Windows Phone 8 up to par with iOS and Android. Specifically we now have a Companion App for WP8, QR code distribution, and full support for publishing to the Windows Phone marketplace.

Previously it could be a bit of a chore to update an existing AppBuilder projects to the latest Kendo UI bits. Now we offer an easy selector for you to move your project between various versions of Kendo UI Core and Professional.

Users of our Windows client and Visual Studio extension will now be able to set breakpoints in code and easily debug cloud code written as part of our Backend Services.

AppBuilder now supports the Mobile Chrome APIs, which allow you to take advantage of most of the existing Chrome APIs and use them in a hybrid mobile environment. This allows hybrid developers to use new APIs, but also allows you to easily port a Chrome OS app to iOS and Android with minimal effort.

Our official release of AppManager brings with it a convenient new email-based method for distributing apps. Now along (or instead of) using our mobile app, you can quickly and easily distribute access to your apps via email while still maintaining the security of authorizing specific users to access the apps themselves.

Along with email-based distribution, we now have a new mobile web catalog which makes it even easier for our existing AppManager mobile app users to reach more users and more platforms. This mobile web catalog mimics our mobile app in many ways, but is simple accessible from a mobile web browser and doesn't require the end user to download and install the mobile app.

The ability to write Cloud Code functions is a powerful way to extend your app with server-side logic for operations that don't have to be on the client. With this release you can benefit from a new improved UI for writing Cloud Code, and ability to define your own custom cloud code functions that can be invoked over a unique URL from the client.

All of your Backend Services Files are now being served from Content Delivery Network (CDN) with over 50 edge servers distributed throughout the world. This significantly increases the download speed of your resources in any area of the world where your mobile apps will download files from the nearest location. You can check all available locations here.

All apps developed on the Professional and Business editions are now automatically provisioned on separate databases behind the scenes. This improves the performance of your app by avoiding any read/write locks and delayed responses that are the result of “noisy neighbours”.

Telerik AppFeedback is also joining the family of services part of the Telerik Platform. It's a new service that allows you to easily gather actionable feedback for your mobile app. To start using the product, navigate to a Telerik Platform Workspace and create a new project of type AppFeedback.

Easy integration with AppBuilder over a Cordova plug-in

The AppBuilder comes with a built-in Telerik AppFeedback cordova plug-in that you can enable in the properties of your project. Once integrated, you can use a shake gesture to take a screenshot of the current screen, point over a problematic area and share a comment.

This official release introduces a feedback component as a PhoneGap Cordova plug-in that allows you to easily integrate it with a hybrid app. We are also close to delivering the feedback component as a native implementation as part of our UI suits for iOS and Android. These native suites will also receive a major additions - such as a new Calendar control and advanced features to their existing Charting libraries.

I will be updating this blog post with all relevant resources to this release in the upcoming days. Stay tuned for more!

Hristo Borisov (@hristoborisov) is currently a product line manager in Telerik leading all cloud technologies part of the Telerik Platform after spending more than 6 years with the company. A passionate advocate of applying lean startup practices to existing organizations, Hristo is on the quest for discovering scalable and sustainable business models through product and customer development using tools like MVPs, Pivots, and Lean Business Model Canvases.