The TeamPulse team is happy to announce the availability of a beta that showcases the exciting new features soon to be released in Q3 2010 as part of the product’s Standard Edition. We have listened carefully to our community and have been working hard on the features you want which you can begin experiencing in this beta.

First and foremost of the features we’ve been hard at work on is the ability to synchronize stories, areas, and iterations with Team Foundation Server (TFS) 2010. Synchronization with TFS is a complicated endeavor but we feel like we’ve hit the mark with regards to the simplicity, robustness, and user experience. 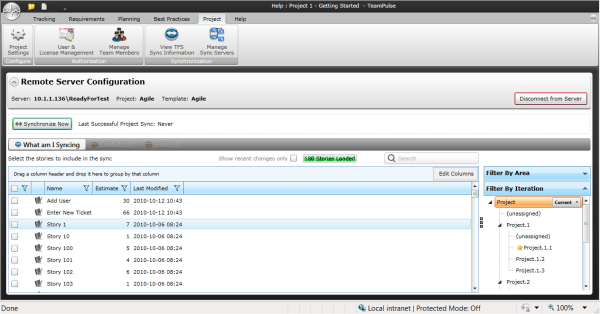 This feature will allow for bidirectional synchronization of items to and from TFS 2010, selecting which items to synchronize and which not to, a simple way to deal with the inevitable synchronization conflicts that may occur, as well as a detailed view of synchronization errors that may also occur. As you can see from the screenshot we’ve kept to the same high UX standard that we set with the remainder of the application.

While the TFS 2010 synchronization feature is our ‘piece de résistance’ for this release, we’ve also been working on other goodies such as overhauling the edit story screen (including a story history view), having the ability to import stories from a CSV file, and incorporating a full featured idea management feature which provides full traceability from idea right down to tasks and acceptance criteria.

This beta is released as a standalone install that can be installed side-by-side with the released TeamPulse. There is no upgrade path from your current installation to the beta however you can make a copy of your production database and rename it to TeamPulse2010Q3Beta and the installer will upgrade it so that you can test the beta with data that you are familiar with. Also note that the beta expires on the 30th of November.

Try it and find out more details about it here

We are looking forward to any comments and feedback that you may have!