Among all other new stuff that we introduced in the Q2 2009 release were also the revised RadForm and RadRibbonForm controls. Base on an entirely new approach, these two controls have been rewritten from scratch and expanded to support many features that the old versions did not provide. Moreover, we have been striving to address all performance and painting issues which were a major problem in the old versions and now we are proud to present what we have been doing the last months.

It turned out that customizing a standard Windows Form is not an easy task and once a custom painting is introduced, many of the default functionalities of the Form just won’t work. Moreover, many underwater stones are to be discovered which might turn the development process into a real nightmare. However, the struggle was worth it and the results are more than obvious with the lots of improvements and new features that we managed to introduce.

Let me start with the Active/Inactive state management (shown on the picture above) which was a missing and also a much requested feature in the old version of RadForm. Now, states are clearly indicated and moreover, smooth color transitions via animations are supported! We have improved the Visual Style Builder support for both RadForm and RadRibbonForm and thus they can be easily styled and customized. Another important thing is the icon support of both the Form’s title bar and the default MDI menu. Form’s WindowState is also reflected by the System Buttons which are part of the Title Bar and can be also styled in the Visual Style Builder.

A major handicap in the old version of RadForm was the narrow hit-testing area for resizing. This behavior is now completely different – non-client area is clearly visible and any sizing-operations have become easier.

Last but not least, I would like to mention the Vista Aero support in the RadRibbonForm and also the possibility to easily toggle the Form’s theming by setting the AllowTheming property for RadForm, and AllowAero for RadRibbonForm: 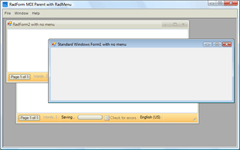 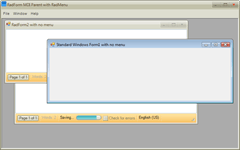 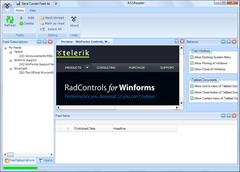 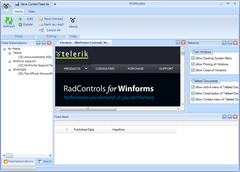 You can give both forms a try and share with us your thoughts! Any feedback would be much appreciated since you are who help us improve and deliver more than expected.