While working on the second release for 2007, Telerik decided to surprise its clients by creating a Silverlight game.
The idea was simple. A registered user enters his or her weight and logs in. This weight contributes to the common goal which is to lift what is on the other side of the rope. 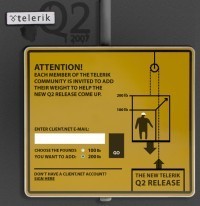 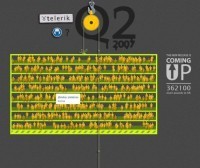 The game was developed using Silverlight 1.1 Alpha Refresh.
We had couple of concerns while developing it, though. First of all we did not know how many people have already installed the 1.1 plug-in. Also we were not sure if the current game was going to reach the popularity of the last. At the end, however, it proved that Silverlight has been adopted by quite few people.

One very important decision we needed to make was how to represent a single user from the database - using a XAML object or a .png image. After some tests and research we decided to stick with the .png image. The reason is because 3000+ XAML elements were taking over 260MB of RAM, while using .png images made the memory consumation to drop to the acceptable 37MB.

After finding solution to the above problem, the rest was quite easy. We developed few user controls(button, person, tooltip) which accelerated the development extremely. The main disadvantage which we found afterwards was a problem with the caching mechanism(same as flash/flex). When the user loads the game for the first time he or she downloads the .dll file locally and on the second visit, the caching mechanism of the browser reuses the local .dll. In order to get the new .dll you need to clear the cache of the browser(alternatively you can hold SHIFT key and press the Refresh button of the browser).