Developers love to hate on browsers. In recent memory that browser has always been Internet Explorer due to Microsoft's decision to slow down browser development after IE6. The ensuing developer backlash spawned countless comics, clever desktop backgrounds, and witty conference slides.

But, as Microsoft has substantially ramped up their work on the web platform and Edge, it now feels unfair to make them the butt of the joke. And increasingly, with the popularity of articles like Nolan Lawson's "Safari is the new IE", developers' new target is becoming Safari. As someone who speaks to a lot of web developers myself (working as a developer advocate for Telerik), I hear this sentiment often. But as a data-minded person, I wanted to see if I could quantify the reasoning behind the animosity.

In this article I'm going to use data from caniuse.com to try to quantitatively determine developers' most-hated browser. But first I have to discuss what I'll be measuring, and to do that I have to go back in time a bit.

What makes developers hate a browser?

Internet Explorer has long held the title of most-hated browser, but it hasn't always been that way. Back in the late 1990s and early 2000s, as Microsoft increased the engineering effort on Internet Explorer, Netscape Navigator's lagging feature set made it the primary target for developer hatred. It's hard to find links that still work that illustrate this, but I've managed to find a couple gems:

History tells us that web developers have a deep-seated need to rant and make snarky jokes about their most hated browser of the day. The anti-Netscape arguments are surprisingly similar to the anti-IE arguments of the last few years, and the anti-Safari arguments of today.

Although I'm oversimplifying a bit, I would argue that web developers primarily hate two things: not being able to accomplish things they can do in other browsers, and a lack of communication as to why those things have not been implemented. I'll start with the former (lack of features) and move on to the latter (lack of communication) later. To put this in context, let's start with an example.

Anyone who has done web development for more than a few years has probably written code like this:

For those of you that don't know, IE did not support addEventListener() before IE9. So if you wanted to attach an event listener to a DOM node - probably the most common use case for JavaScript on the web — you had to fork your code and use IE's non-standard attachEvent() method. Although the workaround was trivial (and often abstracted away by a library), the need to write three extra lines of code for such a simple use case might have done more to incite IE hatred than some of the major features IE lacked for years.

This scenario, one browser lacking a feature, or what I'll call a "feature outlier", is one of the major things I believe drives browser animosity, because nearly every developer has a pet feature they'd be able to use if only browser X supported it. For older versions of IE the list of missing features was long, and, if you go back far enough, included major outliers like PNG transparency and a standards-compliant box model.

The IE box model bug was so well known that — I kid you not — it even has its own Wikipedia page.

I personally know of a few feature outliers in today's Safari. For instance I've been talking about how Safari is the only browser without built-in form validation for years now. Nolan Lawson's "Safari is the New IE" talks extensively about IndexedDB (which Safari has, but it's unusually buggy in Lawson's opinion). But, to get a full list of Safari's feature outliers I had to turn to caniuse.

One of the great things about caniuse is they graciously make the raw JSON data that drives the site available on GitHub. This data made it relatively easy for me to derive how many features only one browser lacks.

What I did was grab the JSON file, and loop over each feature to determine how many features were only in three of the big four browsers. I limited the test to the big four — Chrome, Edge, Firefox, and Safari — as every other browser (with the exception of Opera Mini) is based on one of the same four rendering engines the desktop browsers use. I also chose to use the latest version caniuse has stats on, which means the data includes development versions of Chrome and Firefox, and Safari 9 rather than 8. You can view my full algorithm here.

Without further ado, here are the results of my feature outlier test:

Obviously this isn't the most scientific of tests, but I still find the data interesting when viewed as a rough indication of the features browsers have yet to implement. Edge came out with far more outliers than I was personally expecting, with Safari a distant but significant second.

Why the Safari hating?

So if Edge has more feature outliers, why is Safari receiving so much more hatred lately? I'll offer two reasons.

The first is communication. Although Edge is missing more features, most of the missing features have a documented status on https://dev.modern.ie/platform/status/. Additionally, Microsoft has a portal where you can submit and vote on features, and Microsoft has been good about publicizing their stance on larger features, such as their recent articles on web components.

The WebKit project (the rendering engine that drives Safari) has a status page that's similar to Microsoft's, however it feels lacking in its completeness. For example prominent web features such as pointer events and service workers are not listed. Frequently, the only place to find where the Safari team stands on an issue is on the W3C/WHATWG mailing lists or the WebKit bug tracker, neither of which are especially accessible to the average developer.

The second reason I'll offer for the recent Safari animosity is in trends. Whereas just a few years ago Safari was one of the leaders in terms of browser features, it now seems to be quickly losing pace to Edge. To show this I took the data from caniuse and went back a few years. Using the browser version history from Wikipedia, I calculated how many feature outliers each of the major browsers has had over the last five years (again, you can see the algorithm I used and the full dataset here), and put the results in a Kendo UI line chart: 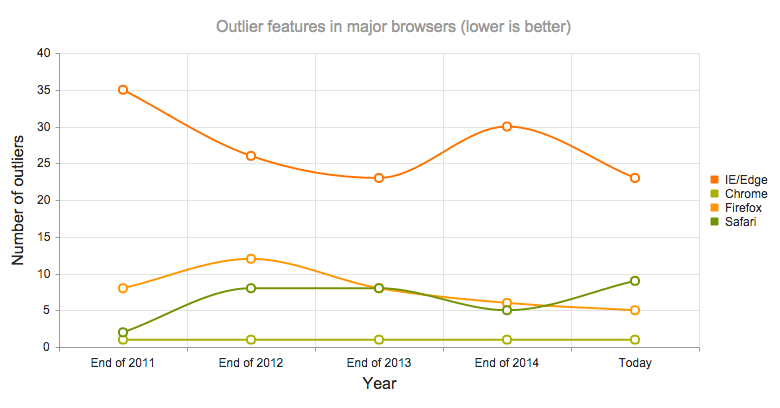 A quick glance at this chart shows a concerning upward trend for Safari. And since this chart includes data from the not-yet-released Safari 9, and the next Safari release won't come in the next year, there's little reason to believe this chart will improve in the near future.

In defense of Safari

All of this is a bit unfortunate, because in my opinion Safari is a really good browser. In my experience, Safari is easily the best browser on OS X in terms of battery and memory usage. (External articles can confirm the battery usage, and I'll use this comic to justify my memory claims.)

On mobile I'll take iOS Safari over any Android-based browser, as I find iOS Safari to be far more performant for my daily web browsing. Safari's feature set also isn't really that bad - it's on par with Edge on HTML5 Test, and among the leaders in terms of ES6 compatibility.

I titled this article “Safari is Not the New IE” because the thought that Safari is comparable to IE from the IE 7–8 days is ludicrous, except in one way: if Edge's current rate of implementing features continues, Safari risks dropping into last place on the browser totem pole. And as history has taught us, whether it's fair or not (usually not), the last-place browser opens itself up to the snarky jokes and memes that the development community loves to create. 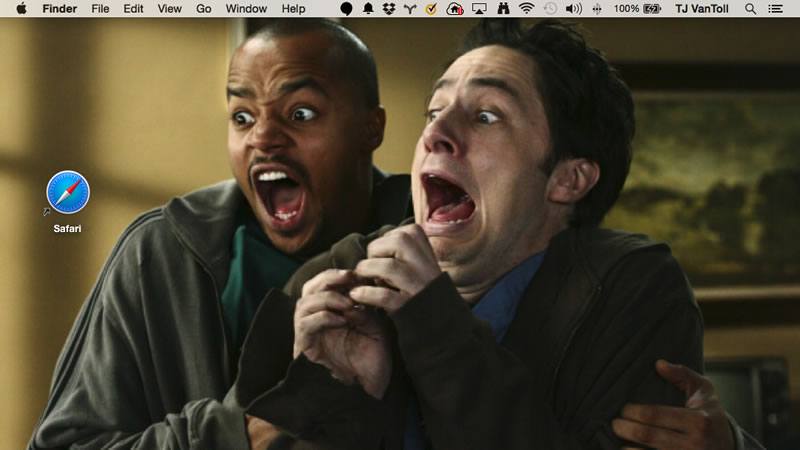