We believe that working hard on something can be great fun at the end when everything is done and the seeds have resulted in the sweetest fruits. This is the case with the new Theming Mechanism and the new Visual Style Builder which we introduced as of Q1 2010.

I am not going to dive into any details on the new concepts behind all this stuff, but will simply focus on the numbers: both in terms of loading speed and memory usage. As you may already know, the new approach we use to style our controls uses the so called Style Repository which stores style settings that can be reused throughout the whole theme. As a result, we have estimated that the size of our themes has been significantly reduced. For instance, the size of all XML files of the Desert theme sums up to 1.83 MB. The case with the new version of the Desert theme is drastically different. Despite the fact that the new theme consists of more XML files compared to the old, its size is only 707 KB!

Furthermore, we have performed a simple performance test since the common sense tells us that such a great improvement in terms of memory footprint should be followed by a great improvement in terms of speed. We have estimated that loading and applying the new Desert theme to a form containing all RadControls for WinForms takes roughly 30% less time compared to the same operation with the old version of the Desert theme. The following screenshots briefly demonstrate the scenario which we used to estimate the loading time difference between the old and the new Desert theme: 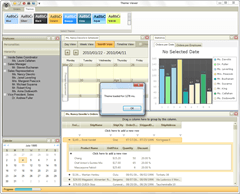 Here, the old Desert theme is applied to all controls on the Form which takes almost 1,3 seconds. 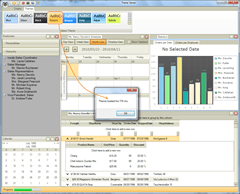 Applying the new Desert theme (based on the new Theming Mechanism) takes about 0,78 seconds.

On top of all these great improvements, we can add the fact that the new Visual Style Builder significantly reduces the time needed to style a control by entirely changing the approach compared to the old version of this tool. You can be sure that we have already prepared some great new stuff for Q1 2010 SP1 that will simplify things further so that designing themes with the new VSB will become more fun than ever!