With the latest TeamPulse service pack we have added three exciting new features for TFS synchronization.  You can now use a TFS query to sync a subset of the work items in your TFS project, sync one TFS project to multiple TeamPulse projects, and schedule synchronization.

Previously, if you synchronized a project with TFS, you had no choice but to sync all the work items that were in that TFS project to TeamPulse (well, all the work item types that were mapped that is).  For instance, if you were synchronizing an Agile project, you had to sync all User Stories and all their child tasks.  This could be a problem if your project was very old and had lots of data you did not want to synchronize, or if you use one big TFS project to manage many smaller projects.

After connecting the projects, a TFS query can be used to specify which work items to sync to which project.  And again, the documentation explains this feature in more detail. 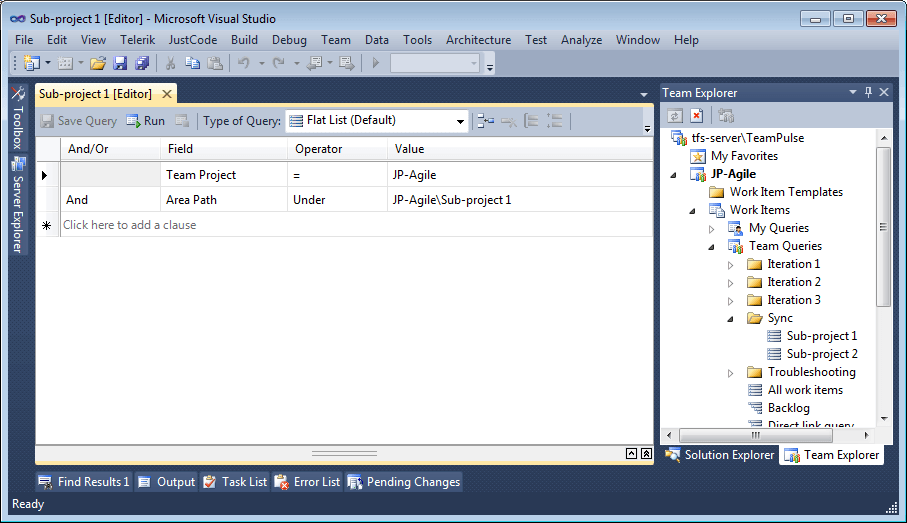 Many users have been asking us to give them the ability to synchronize with TFS automatically, on a scheduled basis.  With the Q3 SP2 you can now do just that.
The schedule is defined in the TeamPulse Integration Service configuration file.  To schedule a synchronization, find the TeamPulse.Integration.Configuration section and change IsAutoSyncing to true.  Then, simply add your project in the projectSyncSchedules section.

We’ve had lots of demand for this feature so we wanted to get something in user’s hands as quickly as we could.  Look for this feature to be expanded and improved in future releases.
You can read more about scheduling synchronization in the documentation.

Be sure to download the TeamPulse 2010 Q3 Service Pack 2 today to try out these new features, and as always, we’re eager to hear your feedback!