What Has Microsoft Done For You Lately?

Thanks to some influencial dialog with Rey Bango and Christian Heilmann I recently stopped and reflected upon Microsoft. What I realized is Microsoft isn't just talking about change - they have actually changed. Just take a look at Github and I think you'll see what I am talking about.

If you are a web developer who frequents Github, you may have noticed Microsoft is competing for your attention. And, like the saying goes, "competition is good for everyone." So, welcome, Microsoft. Nice to have you at the table of companies who obviously care about the web platform, web development, and web developers. No hard feelings, just glad you are here now.

The evolution from web developer roadblock to web developer companion didn't exactly happen overnight. But I feel credit is due where credit is earned. And Microsoft has earned some serious developer street cred as of late in my book.

So here is what Microsoft has been doing for you...

Even a software giant like Microsoft has to burn things down and start over. And this is exactly what they did with Internet Explorer. Thank God. I wish I could have been there to pour some gas on it. IE definitely over-stayed its welcome.

Microsoft burned IE down and built back up a brand new web browser called Edge. Now, building new again doesn't mean much unless you do things right. And Microsoft, out of the gate, seems to be doing a lot of things right.

Some noteworthy "right" things they are doing include:

Since IE was burned down and built back up, Microsoft also took the opportunity to build a better JavaScript engine. Chakra is its name and speed is its game.

It's so speedy, in fact, that Microsoft opened sourced the Chakra core and submitted a pull request to the Node.js repository requesting they enable Node.js to run on the ChakraCore engine instead of V8. Competition! I love it. Let the best engine win and, thus, let developers win.

You need to test something on Windows, in IE6+ or Edge, but you don't use Windows? What now? Well, Microsoft has you covered if you can't pay for something like BrowserStack.

For some time now Microsoft has made several virtual machines available. 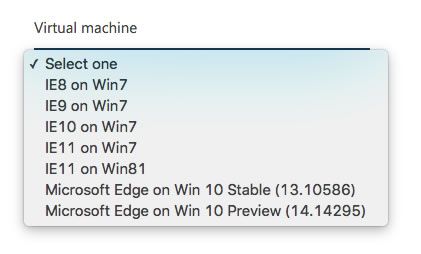 These can be run on several different platforms.

This almost didn't make my list of things Microsoft is doing for developers because who wants to run and manage local virtual machines? Not me. Ideally, Edge would just run on Mac and Linux. But, it doesn't! So, if you need to test and you don't have several Windows machines laying around, Microsoft is providing a solution.

Now, I realize this might not have been a big stretch for Microsoft, since Visual Studio code is a fork from the Visual Studio online editor, but, come on - they did do it. And, it's actually pretty good. Honestly, I never would have imagined Microsoft would be the one providing a real competitor to things like Sublime and Atom, but they did and it's competing nicely. Go Microsoft! Nice use of Node.js and Chromium via Electron.

If a superset of JavaScript is your kind of thing, then Microsoft offers TypeScript. Or, if you want to write modern ES2015+ JavaScript (i.e. evolving future language features), but have to support ECMAScript 3 environments? TypeScript can help.

In TypeScript, anything that is not real JavaScript is optional. This makes the solution malleable to all sorts of coding and developer situations.

Some big players are betting big on Typescript. And, as you might have expected, TypeScript is given first class citizenship in Microsoft development tools. A real win for those who already drank the Microsoft tool kool-aid and want to use TypeScript.

Personally, the thing I like most about TypeScript is that it is built as a Node.js command-line compiler tool and installed via npm. I like it a lot when Microsoft bends to technologies like Node.js because doing otherwise would be to ignore modern web developers.

Recently Microsoft unveiled the experimental programming language called ThinScript. The purpose of the language is to provide a simpler layer on top of WebAssembly to make it easier to work with. ThinScript compiles to both WebAssembly and JavaScript. The syntax is, of course, inspired by TypeScript. While you might not jump into ThinScript up to your chin yet, it certainty is something to watch out of the corner of your eye. At the very least, I feel like the offering is a sign of how proactive and relevant Microsoft is being these days.

The big, BIG, news in 2016 is that Windows will soon ship with a real, native, Bash option (Ubuntu image). No virtualization! (In fact, you can preview this feature today.)

The Bash will support Linux command-line tools (e.g. sed, awk, grep etc.) and Ubuntu binaries that run directly on Windows. As you might expect, it will also allow a developer access to the file-system from within Bash.

The entire point of adding this feature to Windows is to give developers what they want - and apparently its $! In my opinion, this is a philosophy as much as it is a tool. Microsoft has taken notice and delivers, delights, and enchants an entirely new set of developers by thinking outside of the Windows tool box.

However, the Windows Bash has yet to be road tested. It's coming, but not fully here yet. Everyone is sort of stuck at a wait-and-see perspective. My guess is that it will do almost everything you want it to do from a developers perspective, but time will tell.

Here are some more details from the culprits behind the Windows Bash.

Building an application and need to extract information from a photo? Like maybe, the emotion on a humans face. Or, does your application make use of a microphone and speech input along with spell checking? Well, all of these services and many more are now offered by Microsoft as free to start services.

Grab your own free key (yes, it requires a Microsoft account) and you can start using something like the Bing Spelling Check API immediately.

For example, within minutes I was using the spelling API, with some help from jQuery.

Microsoft just released a preview offering of a Bot framework, Bot Builder, and Bot Directory. Apparently, bots are hot. Again. Or, maybe it's a new kind of hotness. At any rate, if you want to program Hal 2.0 so that it can order you pizza from Skype, Microsoft has you covered. If bots make it big, Microsoft will be there.

We don't live in a world of events that are dominated by mouse clicks anymore. Dealing with more than one type of event based on device was silly. Pointer Events are a forward thinking solution for an abstracted pointer. This was needed and Microsoft blazed that trail. So, thank you Microsoft! We needed that. You did good.

One does not always have the option to simply open up a debugger on any device that can run a web browser/webview and start debugging. To solve this problem Microsoft has provided the open sourced Vorlon.js remote debugging tool. This tool helps you remotely load, inspect, test, and debug JavaScript code running on any device within a browser/webview.

Now, as you might expect from the new and improved Microsoft, this is a Node.js command line tool. But Microsoft didn't stop there. They also provide a Windows and OSX desktop application (via Electron) version of the tool as well.

If you need something like this, check it out. Its a handy solution!

Microsoft Is Spreading A Rainbow Of Developer Hugs Delivered on Unicorns (That ought to swing a hipster dev head!)

As you can see, Microsoft has done a lot for you lately. And, I didn't even mention everything that could be mentioned. Regardless, my hope is that what I have mentioned has convinced you that the Microsoft of today is on your side. Whether your are an individual developer or an enterprise, a Javascript developer or .Net developer, Microsoft seems to care about all developers - and they have clearly moved past words to actions. I like the new Microsoft, a lot, and so should you!