This post is part of a series featuring our Developer Experts, community members who represent the best of our products. Read about other featured experts here and meet more DEs here. 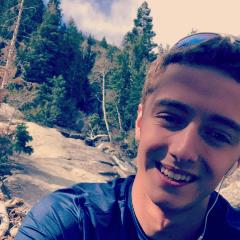 I started tinkering with development when I was 12 with Java on private server forums for a popular game. I learned the ins and outs of packet communication, Netty networking and reflection. At 16, I started my first business job answering phones at a front desk of a manufacturing plant. While there, I noticed they had vendor software to print ID labels for the units they produced. They were paying $1.50 per sheet to print. I went home that evening and developed a label maker utility in Java to reduce that cost, bringing it down to $0.10 for the sheet and ink. Soon after I was transferred over to their marketing department where I had the ability to work on higher level applications and websites.

I played in the marketing space for about 2 years, learning the fundamentals and strategies behind proper search engine optimization and digital marketing. At 19, I was transferred to their IT department as an Application Developer and worked on building an internal CRM with PHP/Laravel and other utilities in C#. After a period of time, I went to work at Maestro as a Software Engineer. At first, I was working on Salesforce Frontend applications, Java Spring micro-services and Angular applications. I’m now the Lead R&D Engineer and handle the development of critical integration libraries and tools for our engineering team.

I live in Kalamazoo, in the lower-left hand of the mitten state (Michigan). My family owns and operates a large farming operation here, so it's where I grew up. I often ask myself "why," but who can say no to short sleeve weather one day and a winter jacket the next?

We are currently in the final stages of launching a large enterprise learning application built in NativeScript Angular with complete code sharing to an Angular web app. Outside of that, I have been operating my own business for the last 5 years building anything from web sites, web apps, digital marketing, to process automations. I’ve been involved with a lot of great local companies as well as a few large corporate companies.

I currently work at Maestro as well as operate my own business called Devonite (dev-on-it - play on words). It allows me to interface with a lot of different talents and share knowledge from corporate projects to small businesses wanting to grow. Some interesting projects include:

Academy: Course authoring tool built in Angular and on Firebase, for allowing a client to author certification programs for service companies on their products.

In short, I'm pretty occupied these next few months. I had started to build a real-time game called "What The Meme", basically Cards Against Humanity, but in an app and with memes. I'm not finished yet, but it's a pretty fun idea and pulls in a lot of different technology challenges that I had to really get at the bare bones of Firebase and Angular to solve.

We are pretty hungry to accomplish a lot of large-scale applications, which require a lot of code re-use. This has required us to really abstract a lot of implementations for common things like: Auth, Forms, Offline, etc. It's been challenging, but also rewarding to share one module across 3-4 different applications with minimal extensions.

NativeScript - because Progress took a broken sector (hybrid apps) and built a powerful, extendable and SOLID framework that completely changes the game for true native development. Also the plugin development for NativeScript is unparalleled. I've researched Cordova plugins and React native plugins and their development strategy is painful compared to what {N} gives you.

What’s the biggest software pain point, in your opinion, in the mind of your partners or clients?

The biggest software pain point that I’ve found is that individuals and businesses alike have a near impossible time staying focused on the problem they are trying to solve. Take shopping, for instance. You go to the grocery store for milk, yet you come home with cookies, a new dog and sometimes you even forget to buy the milk altogether. What happened? You were too caught up in the buzz to focus on why you were even at the store in the first place. This is also true of business. Organizations often have a problem they are trying to solve. They then get so caught up in the buzz of design, “cool” features and scope creep, that their final product falls short and under delivers on their original problem.

To solve this, I have started onboarding clients with the idea of the core problem principal. Features are only scoped around problems. We do not add features unless it contributes to our core reason for starting the project. The end result is a product that solves the problem and only after that, do you start adding features that enhance the applications workflow. Steve Jobs believed that you had to give people something that they did not even realize they needed. The truth behind that is people do not know what they need; you have to figure that out for them.