One of the most frequently asked questions lately about JustTrace is when will it be available for Visual Studio 2013. The answer is right now. If you’re already playing with the new Visual Studio bits than this is great news. All the current features of JustTrace are fully supported in the Preview build of Visual Studio 2013

In addition to support for VS 2013 Preview, other features designed to make JustTrace even easier to use. You’ve always been able to “view source” in JustTrace from the Performance Profiler. SP1 adds the ability to “view source” from the Memory Profiler as well via the right-click context menu or the “Source” toolbox button. (Figure 1)

Another improvement to the memory profiler is the addition of a legend to the “Path to GC Roots” snapshot view. (Figure 2) 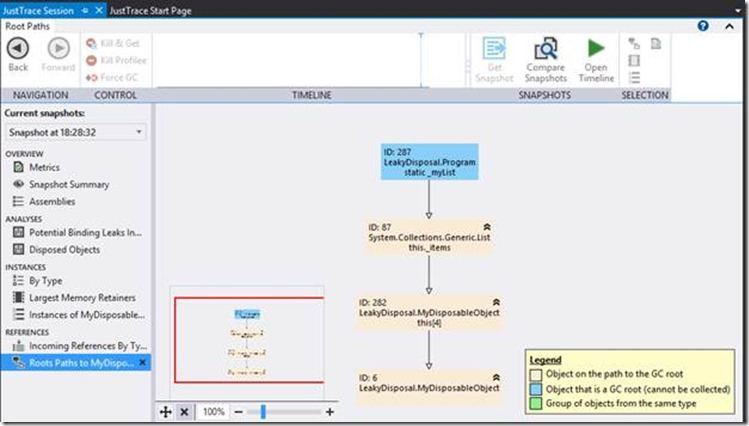 The addition of the legend makes interpreting this diagram much easier, especially for users who are new to this particular view.

The Performance Profiler received some enhancements as well. A major new feature is the ability to group methods by namespace. (Figure 3)

Figure 3 – Methods can now be grouped by namespace.

This new feature is incredibly helpful for developers who want to focus on the performance of specific areas of their applications. Now you can drill down based on namespace and quickly find and focus on the information you care about.

The last new feature for SP1 is the addition of tool tips for the performance counters in the Performance Profiler. (Figure 4)

Like the legend in the “Path to GC Roots” view, these tool tips will help developers understand the metrics that JustTrace is capturing, enabling them to better understand the data they are seeing and be more confident in the decisions they make based on that data.