Most of the commands in Telerik JustCode are assigned keyboard shortcuts, granting the speed and convenience you expect from a quality productivity tool. This is, of course, a very important and often overlooked feature. For Q3 2012, we decided to improve the way in which JustCode approaches shortcuts by creating keyboard shortcuts profiles and related enhancements.

Before the introduction of keyboard shortcuts profiles, JustCode only had one predefined set of shortcuts for its commands. Visual Studio silently applied these shortcuts during its first execution after the installation of JustCode. This behavior proved to be inconvenient to many users, so we looked for another approach. This led to the creation of shortcut profiles.

Our goal was to solve two problems:

We came up with the following solutions:

How to apply a keyboard shortcuts profile

Applying a shortcuts profile is easy, and we wanted new users of JustCode to have no barriers to finding this feature. Since new users encounter the Getting Started Wizard when first starting Visual Studio after installation, it made a perfect location. 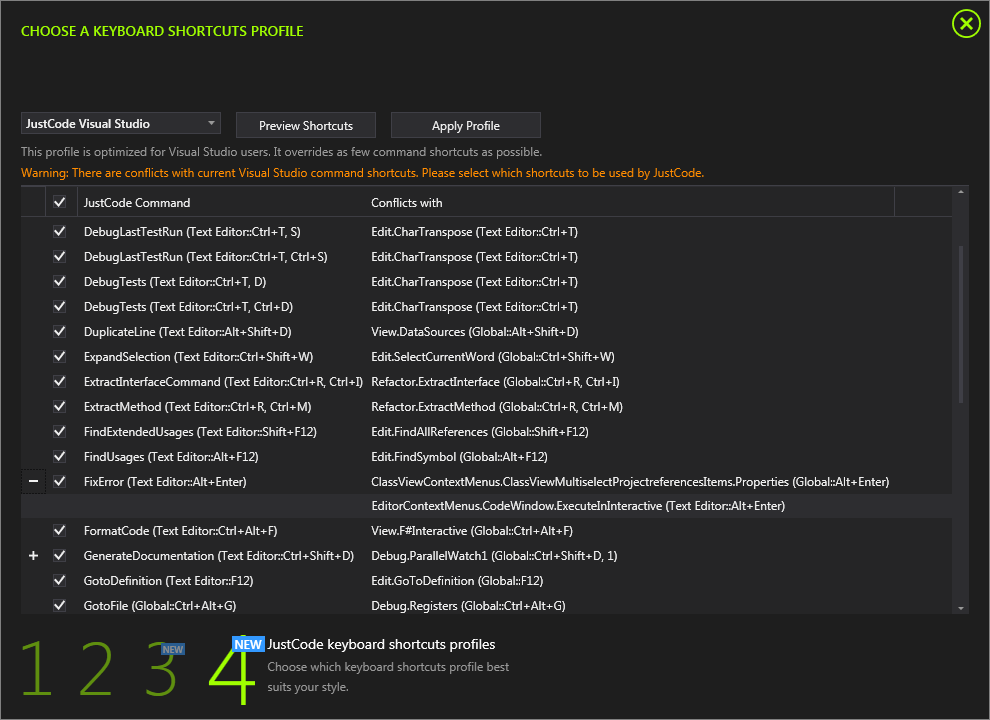 You are not required to apply a profile from Getting Started Wizard. You can also apply one in the JustCode Options dialog under Keyboard Shortcuts. 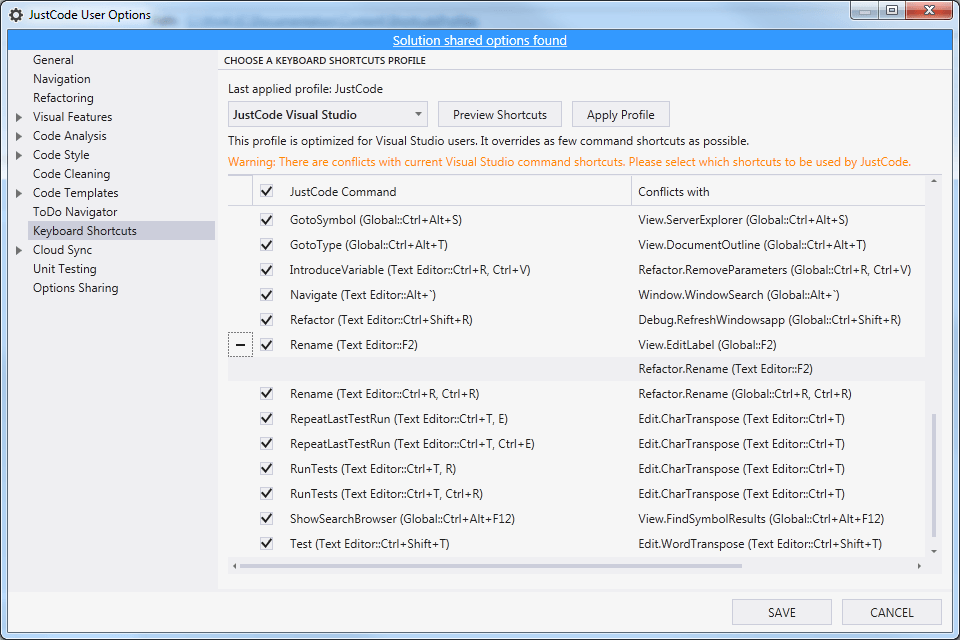 There are a few points of interest on the Keyboard Shortcuts page:

Note: existing users of JustCode do not need to apply a profile after upgrading to Q3 2012 as they already have the “JustCode” profile applied. If you need to reset the existing JustCode shortcuts or apply another profile, use the Options dialog shown above.

A short description of the keyboard shortcuts profiles

This keyboard shortcuts profile is optimized for users with strong Visual Studio background. It overrides as few shortcuts as possible.

This is the original (legacy) JustCode keyboard shortcuts profile.

This keyboard shortcuts profile is optimized for R# users that have used its IDEA profile.

This keyboard shortcuts profile is optimized for R# users that have used its Visual Studio profile.

In general, there are two types of shortcuts conflicts when applying a profile:

These conflicts occur when the scope and shortcut of JustCode command and Visual Studio command(s) are the same. The conflicting Visual Studio shortcuts are removed.

In both cases described above, you can choose whether to apply the JustCode shortcut or not. To prevent a shortcut from applying, uncheck the box in front of it.

After installing a new version of JustCode that introduces new commands, you may see the “New Commands Shortcut Conflicts” dialog.

When you open Visual Studio after upgrading JustCode, shortcuts for newly introduced commands are configured. If there are conflicts with existing Visual Studio shortcuts, JustCode displays the “New Commands Shortcut Conflicts” for you to resolve. Pressing the “Cancel” button or closing the dialog will not apply any shortcuts.

We are constantly improving JustCode to help you be more productive, and we believe that keyboard shortcuts profiles is a valuable feature for many developers.

If you are still using Visual Studio without JustCode, why not see what you are missing by downloading a free 30-day trial.

Borislav Kulov he has more than 10 years of experience in the development field. Borislav is a motorcycle enthusiast and in his free time he enjoys swimming and other sports.