As a reminder from our last blog post, there are ten categories for C# Code Style Settings.:
In this post, we will look at the last five categories – Ordering, Brace Positioning, Wrapping, Using Directives, and Naming Conventions. 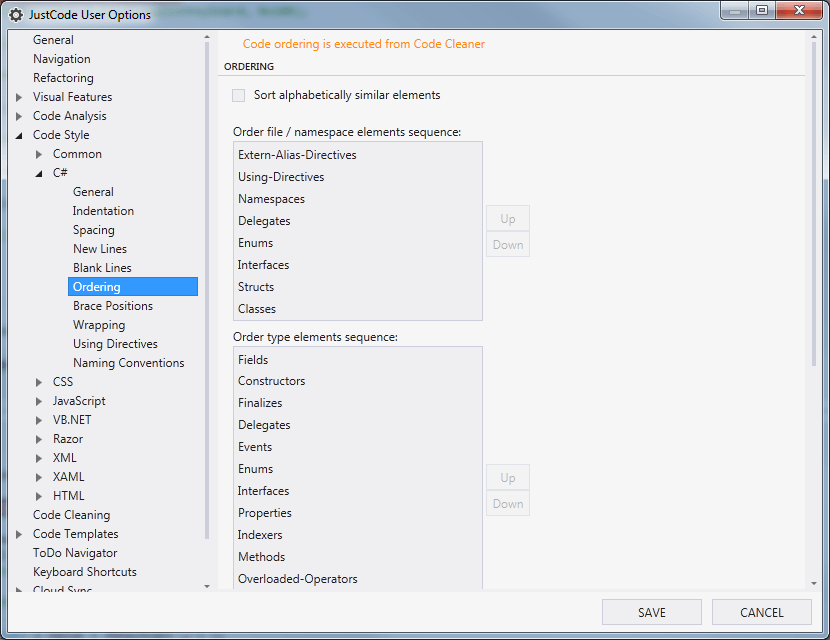 The Ordering page (shown in Image 1) allows you to define the order that code elements are arranged in your code.  The JustCode “Code Cleaner” step “Reorder and Format code” will reorder your code according to the order defined in the settings page.

There are two groupings for ordering - File/Namespace elements and Types. You use the list boxes to define the order of the code elements, moving items up and down by selecting them and using the “Up” or “Down” buttons.

Elements can also be split by access and/or static modifiers. To add the additional level of detail to the ordering, right click on a given option in the list and choose the split type(s) from the context menu (as shown in Image 2).

You can merge the split elements back into a single element by selecting “Merge” from the context menu, essentially reversing the split process. 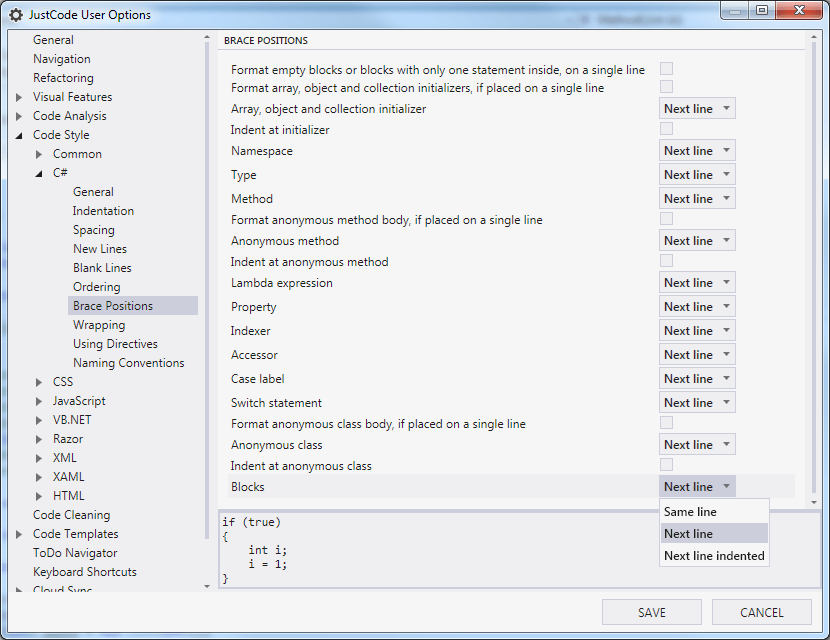 Brace positioning preferences vary as widely anyone can imagine.  JustCode extends Visual Studio functionality and provides the ability to individually customize the location of opening braces for many different types of code blocks (see Image 3). You can choose from three options where to position the opening brace for each code block: on the same line, on a new line, or indented on a new line.

The three options are illustrated in the image below (Image 4). 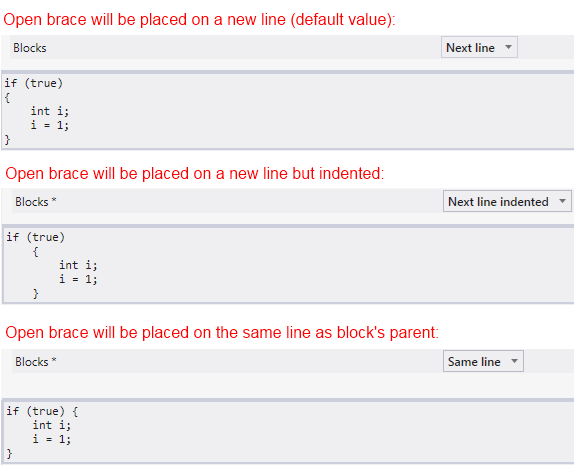 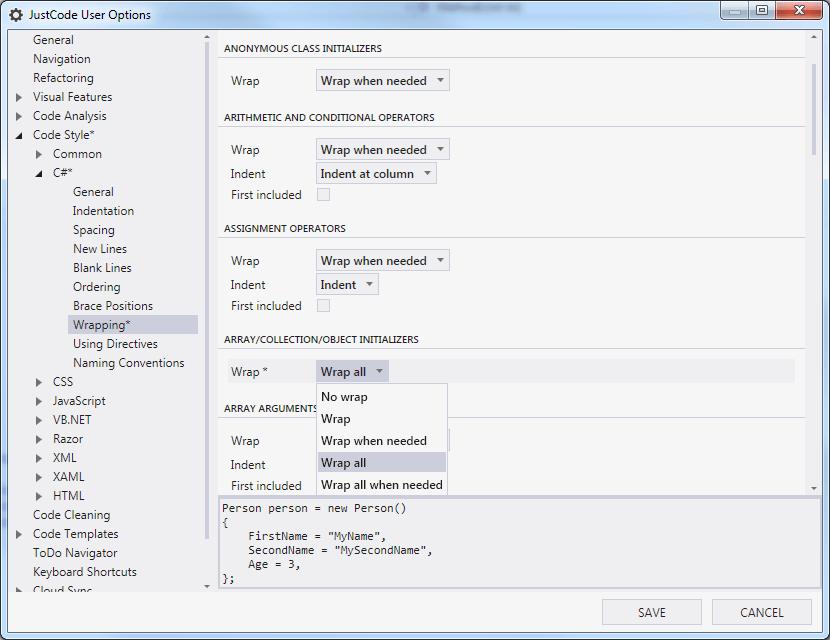 JustCode allows customization of line wrapping by code construct, which far exceeds the way Visual Studio handles line wrapping. A few of the options are shown in Image 5. As with the other Code Style settings, the Wrapping Settings preview the changes at the bottom of the page.

By default the max line length is set to 9999, which is essentially no wrapping.  Changing this value to a smaller value will enable your code to fit on your screen.

“Wrap” - defines how exactly the wrap should be performed. You can choose from the following options:
“Indent” - defines how the elements will be indented (shown in Image 6):
“First Included” – If selected, the first element should be included in the wrapping. 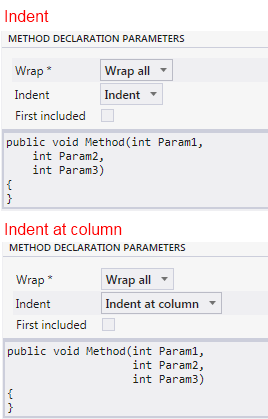 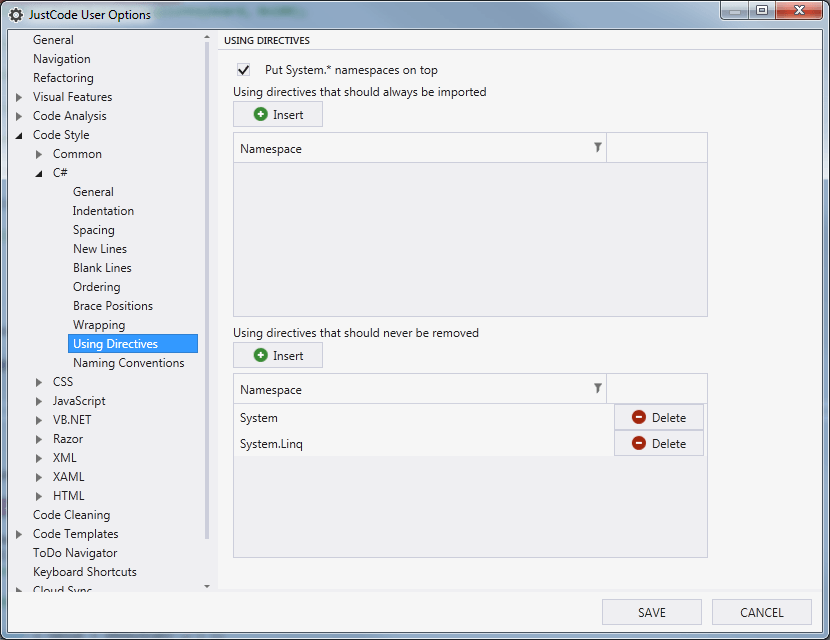 
C# Code files typically include “using” statements for commonly used namespaces.  JustCode already provides functionality to organize the using statements in a file, project, or whole solution via the “Organize and Add Missing Usings” command (available from the context menu as well as the visual aid) or the “Code Cleaner” feature. 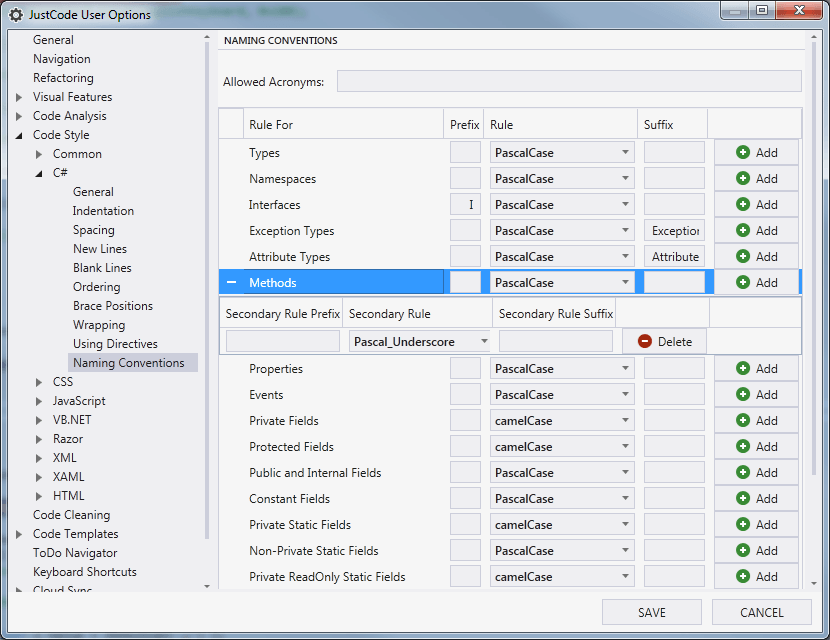 The Q3 2012 release added improvements to the Naming Conventions process. JustCode will show you a warning if you type a name that goes against the defined naming conventions as long as the acronym typed is longer than two chars. You can add exceptions to this by adding acronyms in “Allowed Acronyms”, separated by a comma or a space.

We welcome you to experiment with the Code Style settings. We are confident you’ll be able to make your code look exactly like you want it. Your previous settings are safe with JustCode’s Visual Studio Cloud Backup - just be sure to create a backup before you begin.

If you have a suggestion for more customization, please leave us feedback on the JustCode Feedback Portal. You can also write to us in the forum as well as contact support directly.

Borislav Kulov he has more than 10 years of experience in the development field. Borislav is a motorcycle enthusiast and in his free time he enjoys swimming and other sports.