Now that Q1 2010 release is out in the wild, we can sit down and discuss some of the changes we decided to make in the new release. One of them is the new appointment rendering of RadScheduler - a potentially breaking change, but a much needed one.

While trying to improve the performance of RadScheduler, I noticed that the number of resources slows down the rendering and overall performance considerably. This had to be expected - the images to support the appointment rounded corners (and the predefined resources) were quite large. However, I didn’t take into account that all browsers keep for performance reasons their images uncompressed in memory and with the color depth of the current desktop. A simple calculation later I discovered that the appointment sprite itself is taking 25MB memory when loaded. Add 5 resources to the fray and you have 150MB memory down with a single blow. As it turns out - a sprite image is not a panacea, if it gets too big - don’t be afraid to break it in two. The loading time may suffer, but your browser suffers more while rendering a 25MB monster.

First I thought of undertaking the aforementioned solution - breaking the appointment sprite in two and thus reducing the two appointment sprites to mere 2MB uncompressed. Then I thought - the rounded corners are small - I can use borders and backgrounds to simulate rounded appointment borders while still keeping the same HTML structure. The gradients can be done with a single 10x50px image plus we have a gain - border colors and backgrounds can be changed on the fly.

I started with five rendering elements at first, then tried with four and finally I settled on only three elements.  Behold the new appointment rendering (quite simple really): 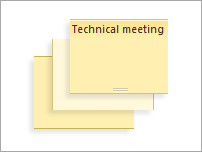 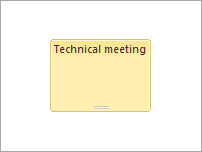 On the left you can see that the first container has only top and bottom borders and a background. In fact, the background isn’t even needed since it will be obscured by the elements on top of it. The whole first container is only needed for the four dots that reside in the four corners of the appointment. On top of this container is another one that holds the left and right borders and slightly lighter background to create the illusion of a second lighter border beside the other two. At last on top of all others is placed the text container that also holds the top and bottom borders and the gradient background. On the right you can see the final result - I’m quite happy with it and I hope you will be too. Overall this is what happens:

After creating the new rendering we took another step further - we decided to use alpha gradients for the resource rendering, thus supporting any color appointments with rounded corners and gradients. You can see some examples below:

We plan on adding BorderColor and BackColor properties  to the ResourceStyles definitions for Q1 SP1.

However with the new rendering in Q1 2010 we do support BackColor and BorderColor appointment properties - you only need to set AppointmentStyleMode=”Default” to keep RadScheduler from switching to Simple appointment rendering. Here is one screenshot of RadScheduler with appointments set to different colors: 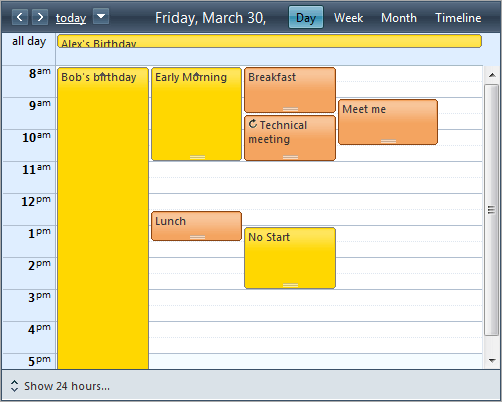 I hope that you will enjoy working with the new appointments in RadScheduler.