Half of Developers Still Doing Nothing With Mobile App Development

Last month, we surveyed 2,200 developers to determine the “App Development State of the Union.” The survey’s objective was to determine priorities and pain points surrounding application development—from desktop to mobile—in organizations large and small.

The survey yielded many interesting results, but one finding from this survey stood out clearly: half of developers are not yet building mobile apps. 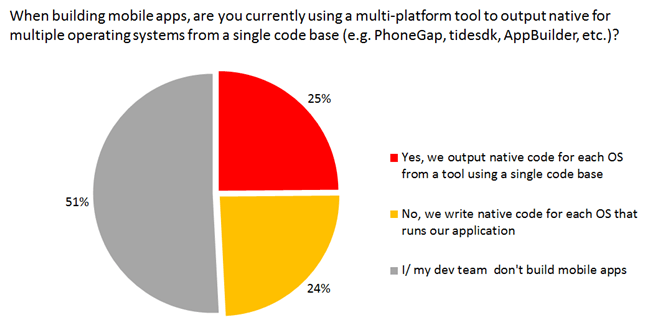 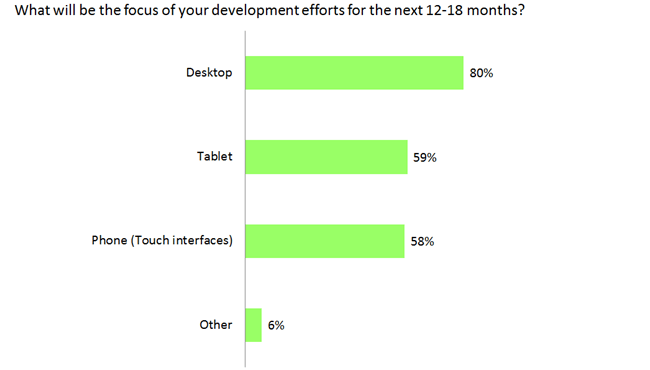 These survey results stand in stark contrast to daily headlines proclaiming desktop to be dead and heralding the arrival of the “” world. Clearly, for many developers, is still alive and remains a big focus of their future development efforts. However, this survey also shows a growing shift in priorities, as well as some big challenges preventing development teams from addressing the opportunities provided by mobile technologies.

Although many tech journalists might be surprised to see a headline proclaiming desktop to be alive and well, developers working on the front lines will probably be unsurprised. Many development teams have spent years developing custom desktop apps that are used daily within organizations to enable employees and customers.

Although the opportunity presented by mobile technologies is huge, accommodating these new form factors isn’t trivial. Development teams are often very busy supporting what they already have and left little time to spin up new mobile projects. In fact, in our survey “lack of time” was the most common pain point developers cited related to their application development. 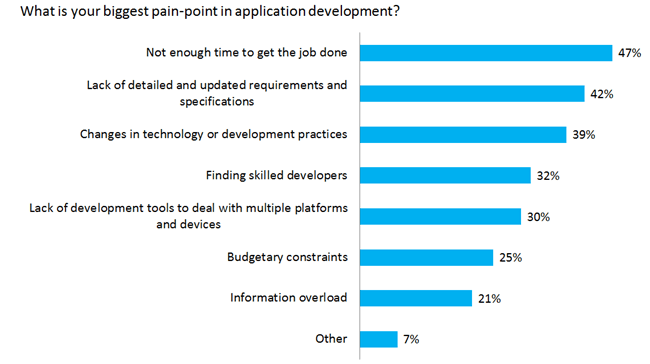 When “lack of time” is combined with other frequently cited pain-points (“changes in technology”, “finding skilled developers”, “lack of tools”, “budget constraints”, “information overload”) a trend starts to emerge; developers are being to do more with less, even while technology evolves faster and faster.

Until very recently, mobile application development represented a new , a new code base and the abandonment of existing tools, services and technologies that development teams have historically relied on to do their jobs. Against this backdrop, it should not be surprising to us that mobile development lags in comparison to traditional desktop development.

Developers Are Shifting Their Focus To Mobile

Although our survey shows more than half of developers are not actively involved in app development, it would be wrong for anyone to interpret these results as an indication that mobile is unimportant. The shift to mobile IS happening and the opportunities provided by mobile technologies are very real. 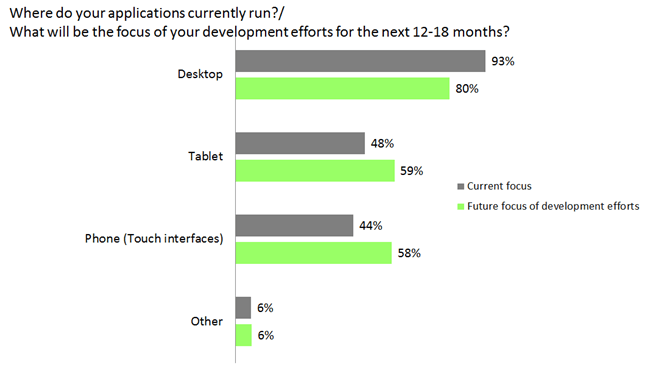 The pendulum is swinging, but it’s swinging slower than many headlines would leave you to believe. This is good news for developers who are feeling hopelessly behind, but it also suggests the clock is ticking. Our daily interactions with our mobile devices have forever changed our expectations of what technology should be capable of. Increasingly, it will be critical that developers meet those expectations with cross-platform experiences.

User expectations are steadily rising and developers are feeling increasing pressure to create cross-platform mobile experiences. However, as our survey shows, developers are simultaneously required to support existing desktop experiences and this, coupled with a lack of time and resources, is slowing their ability to address mobile technologies.

In the spirit of “doing more, with less”, there are new mobile application development platforms emerging that enable developers to use the skills, technologies and tools they already have to create cross-platform mobile experiences. Our survey shows that most developers are deeply involved with web technologies (HTML5, CSS, JavaScript). 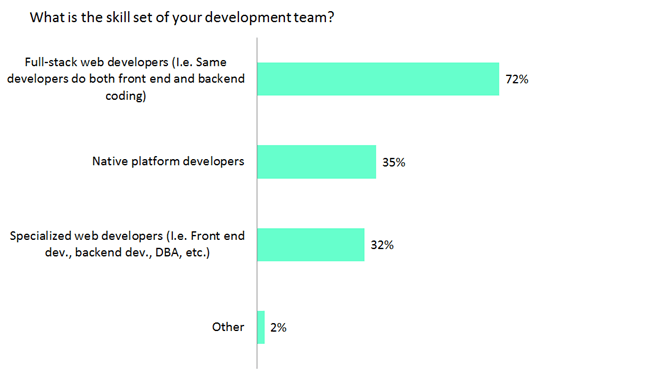 These new mobile platforms enable developers to use the coding languages they already know (JavaScript) inside the tools they already have (Visual Studio, Sublime Text, etc.) to create apps for a variety of mobile devices (iOS, Android, Windows Phone). In addition, these platforms help developers connect their app to their existing data, debug their app, deploy their app and measure the engagement.

Our survey offers evidence that the shift to mobile IS happening. However, it’s happening slower than many might’ve expected. This is because developers are forced to support a lot of existing desktop apps with limited time and resources for exploring new mobile opportunities. However, user expectations for mobile experiences are rapidly rising and developers are shifting their focus to meet those expectations. Given their resource constraints, developers will need to rely on tools that enable them to do more, with less.

View The Full Survey And Try The Telerik Platform

The full results from our “App Development State of the Union" survey are available for download by visiting the following link.

In addition, earlier this year, Telerik launched own mobile application development platform. This platform enables developers to use their web skills (JavaScript) to create cross-platform mobile apps. The platform also embraces the tools developers are already using and integrates with a variety of technologies and external ecosystems.

Gabe Sumner (@gabesumner) is a Product Marketing Manager at Telerik. He lives in Mountain View, CA and loves to talk with customers to absorb their perspectives and feedback. At Telerik he works to create alignment between customer challenges, product features, company values and external messaging.