A Gentle and Practical Introduction to Progressive Web Apps - Part 2

In the previous article, I introduced you to some of the basics of what makes up a progressive web app (PWA). I helped define a PWA as well as listed the various components of what makes up a PWA. In this article, I'm going to focus in on the "discoverable" aspect of PWAs. This comes down to how a website can describe itself. It will cover things like how it can be added to the home screen (or desktop) and how it behaves when opened by the user. The main way this will be handled is with a feature called the App Manifest.

Adding an app manifest to your site is probably one of the easiest things you can do. Why? It's just a JSON file! In fact, the only part of this process that may take you some time is setting up the icons for your site. Outside of that you can probably knock out this feature in a few minutes.

Setting up the manifest allows you to:

The code below, and all code listings for this series of articles, may be downloaded here.

Let's begin with a simple manifest:

In the JSON file above, only one field is defined, name. The app manifest supports many more properties and I'll list them in a bit, but for now we'll keep it simple. As you can probably guess, the name value simply provides a name for the PWA. In theory, it could match what you have in the title tag. This file can be named anything you want, but I'll call it manifest.json.

To actually use the manifest, your HTML has to include a reference to it in the HEAD portion of your HTML. It uses a simple link tag:

If you aren't using a fancy SPA (single page app) then you would want to ensure that every page in your site includes this tag. You can find a "complete" version of the listings above in the folder, demo1, in the zip file mentioned above.

Congrats, you're done! Ok, so by itself this isn't going to do much. If you were to actually add a site using this code to your device home screen, the label for the icon would be "My App" in browsers that support PWAs. (The final article in this series will discuss what happens in iOS. While iOS 11.3 adds initial support for PWAs, I'll definitely cover what can be done to support older browsers.)

Let's ramp up how well our site describes itself by adding more properties. First, let's list all supported properties in the manifest file. I'm going to reference the excellent MDN Web Docs article on the feature. First, let's look at the fields related to what you will see when added to the home screen.

Now let's cover fields that impact what happens when the app is opened:

And then there are a few more options as well:

Wow, that's a lot! Luckily you don't need to specify all of them, only the ones that make sense. Technically nothing is "required," but the more you provide the better the operating system can work with your site.

In order to support the "add to home screen" prompt (what Google calls Web Install Banners), there are certain requirements. You'll need the short_name, name, an icon, and a start_url. That's just for the app manifest though - it also requires a service worker and more. You'll see how to test for this later in the article.

Let's start with a more advanced example so we can begin seeing how it impacts what is saved to the device. (The following file may be found in "demo2" from the zip file.)

Let me call out a few things here. First, I already said icons is an array, but here you can see an example of the fields to use within each defined icon. In this case, I have a src, a type, and a sizes value. The use of "images/icons" as a path is completely arbitrary. Note the use of a query string variable in the start_url value. Again, this is optional. And finally, display is set to fullscreen.

Lastly, here is the HTML, which is pretty minimal:

Literally the only thing you need to concern yourself with is the manifest loaded in via the link tag. If you want to test this simple site yourself, open your browser to https://guiltless-attention.surge.sh. I loaded this up in an Android emulator and selected the "Add to homescreen" option. Note I'm prompted to select a name for the app. The default comes from the app manifest and my icon is present as well. 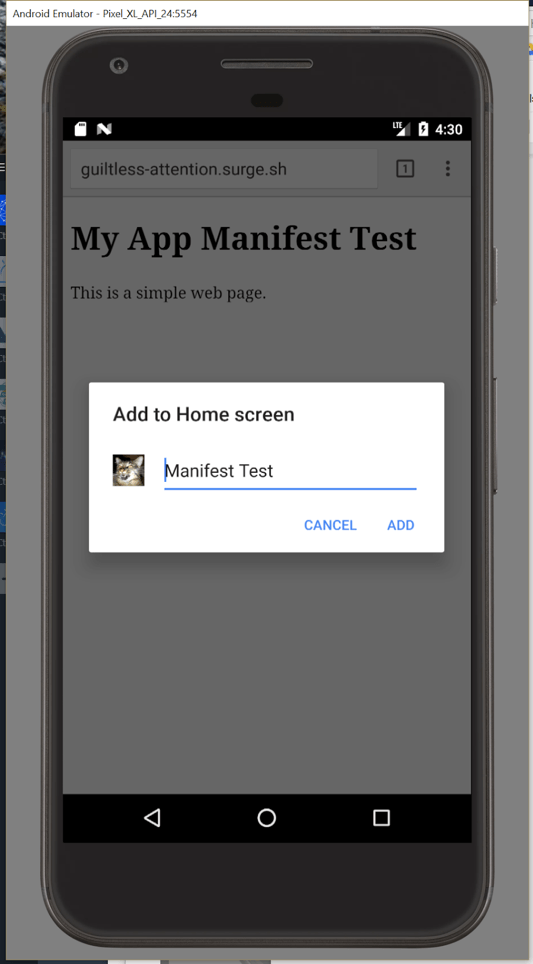 And now I can see it on my device: 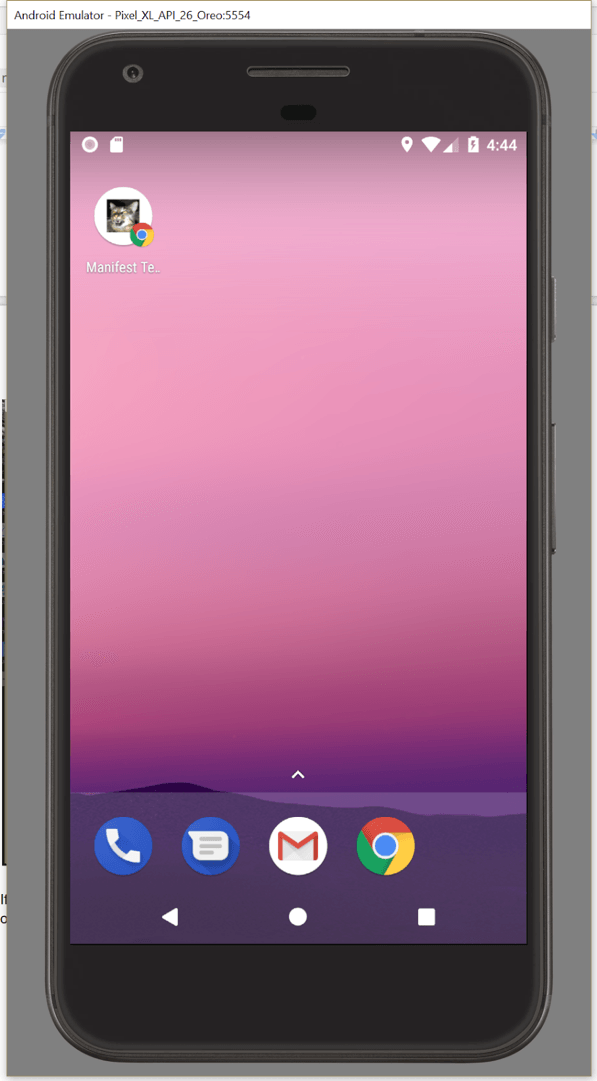 Notice that there is a little Chrome icon "attached" to my icon. I call this the "Not a Real PWA Badge of Shame" and as you can imagine, I'm not a fan. Earlier versions of Android would display the icon as is, but for some reason the powers that be at the big G decided that a website saved to the desktop not using a service worker and without offline support should be marked. I… disagree with this, but there isn't anything you or I can do about it. Just don't be surprised by it and if you have older Android devices, expect it to look a bit different.

If I open it, notice how the UI looks more like a real app. As an example, there isn't a URL bar on top: 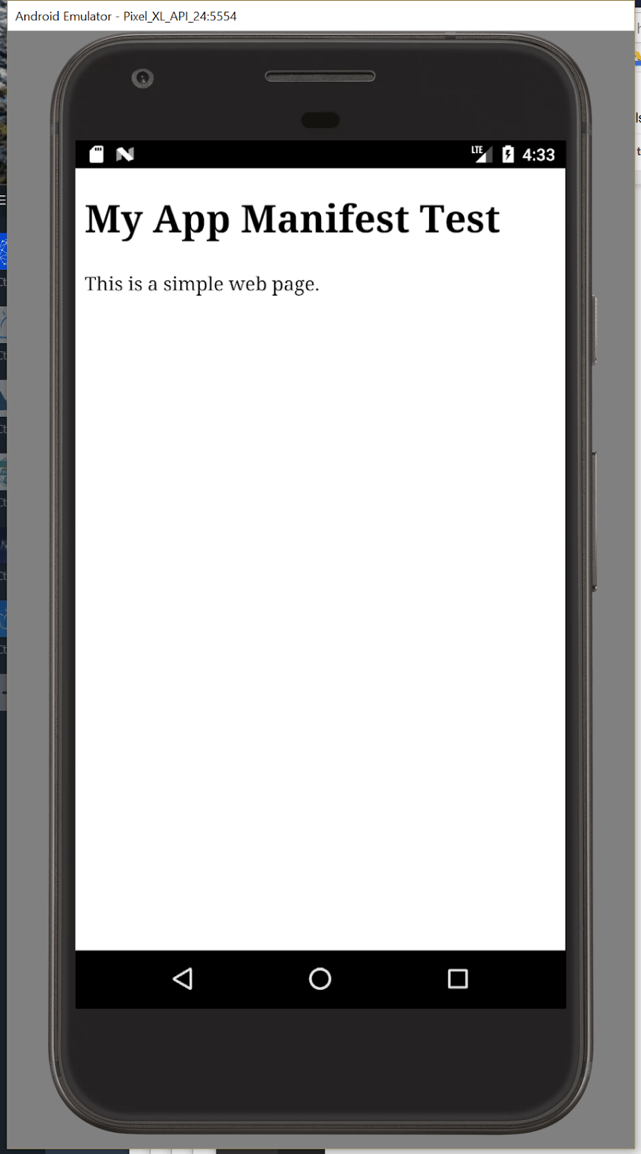 Well, yes, kinda. Obviously we could supply more values to the manifest to further customize the experience and of course the big question is - how do we get rid of this disgusting little turd attached to the icon: 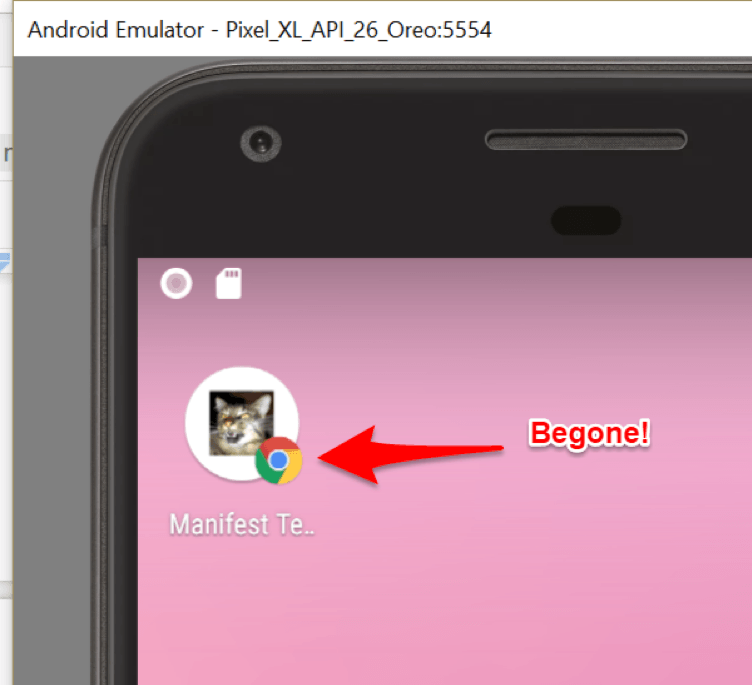 That will all come next in the next article in the series where we finally tackle the service worker! Stay tuned, and feel free to let me know what you think so far in the comments below.

A Gentle and Practical Introduction to Progressive Web Apps - Part 3