Design your RadCarousel with just drag & drop in Q2

While we are currently polishing the new RadCarousel features, I thought that some of them look pretty exciting and you may be anxious to have a sneak peek.

A great new feature of RadCarousel that saved tons of time is the ability to define an ellipse or a bezier path for animating carousel items by just dragging the carousel path points around in the designer.

The new carousel designer does not only display a preview of the path items follow, but also allows you to grab a point from the path and drag it around in your Form designer. Imagine how much easier it is to draw the ellipse or bezier path that way. And even more. After changing the path, RadCarousel will immediately animate its items to their new positions right there in the designer! Now this is exactly what you'll expect from a good visual designer - to give you a preview of the look and feel that is very close to the one you'll get when you run your app. 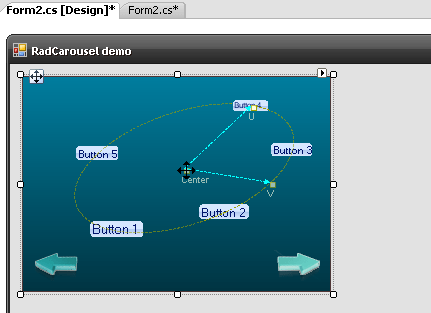 Another important enhancement coming in Q2 is the automatic path scaling recalculation when resizing the Carousel. Since the ellipse and the bezier path curves are formula based this really used to give me a headache any time I tried doing this by myself in the designer.

And this works really simple. When the "relative path" option is turned on, all path coordinates are converted by RadCarousel, relative to the control size. Then a point with coordinates X and Y of (0,0) - becomes the top left corner coordinate of the control and (100, 100) corresponds to the bottom right corner.

The end result, of course, is that you are able to create WinForms UIs like that in no time!