With SP1 RadGanttView has introduced a couple great new features.

Automatic Timeline allows you to introduce a semantic zoom on your timeline. Depending on the length of your project and the zoom level applied, you will be able to visualize your timeline in half-year, quarter-year, monthly or even daily increments. Displayed below is an example displaying the timeline completely zoomed out in a half-year view:

Changing the zoom level changes the view, below you can see the same timeline as above displayed in a quarter-year view based on the zoom level applied:

The introduction of this feature improves usability especially on larger projects. You can visualize the big picture on long-running multi-year projects, while at the same time retain the ability to zoom down into the details.

Custom Timeline is the next feature introduced to RadGanttView in SP1. There are times when you want to have your timeline grouped in a specific way that is not provided out of the box by the control. You now have the ability to leverage built-in functionality to define your own custom time ranges. For instance, if you would like to display your project data by decade. This is now easily done by using a custom timeline. Below you will find an example of the timeline organized by decade:

Our popular RadRating control makes its entrance into the RadGridView world. It is now available as a column type. GridViewRatingColumn gives you the ability to collect and display ratings on records bound to the grid. In the following screen, we use the precise selection mode with a minimum value of 0 and a maximum value of 100 to represent the percentage of seatbelt usage in each U.S. State in 2012: 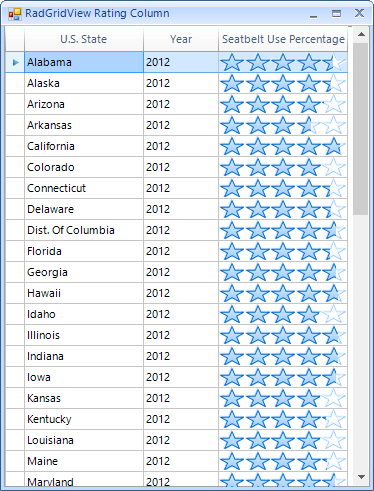 When working with large sets of data, it is quite common that you will be representing quite a few elements across your categorical x-axis. This led to the problem of having overlapping labels. Now labels will be rendered similar to an index so that you get an approximate location of the item you are looking for. For instance, in a chart that displays the 50 U.S. states and the categorical axis being sorted alphabetically, you can easily find the state you are looking for by referencing the labels shown in the RadRangeSelector. 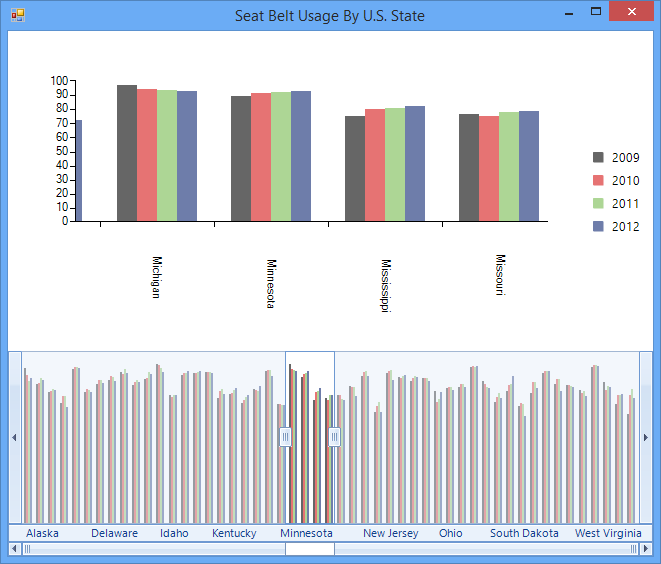 The Q3 2013 release of RadControls for Windows Forms brought a new theme into the mix, the Office 2013 Light theme. With SP1 we’re happy to introduce the Office 2013 Dark theme. This theme completes the Office 2013 theme collection and lets you take full advantage of the modern and familiar look of Office 2013 in your applications. 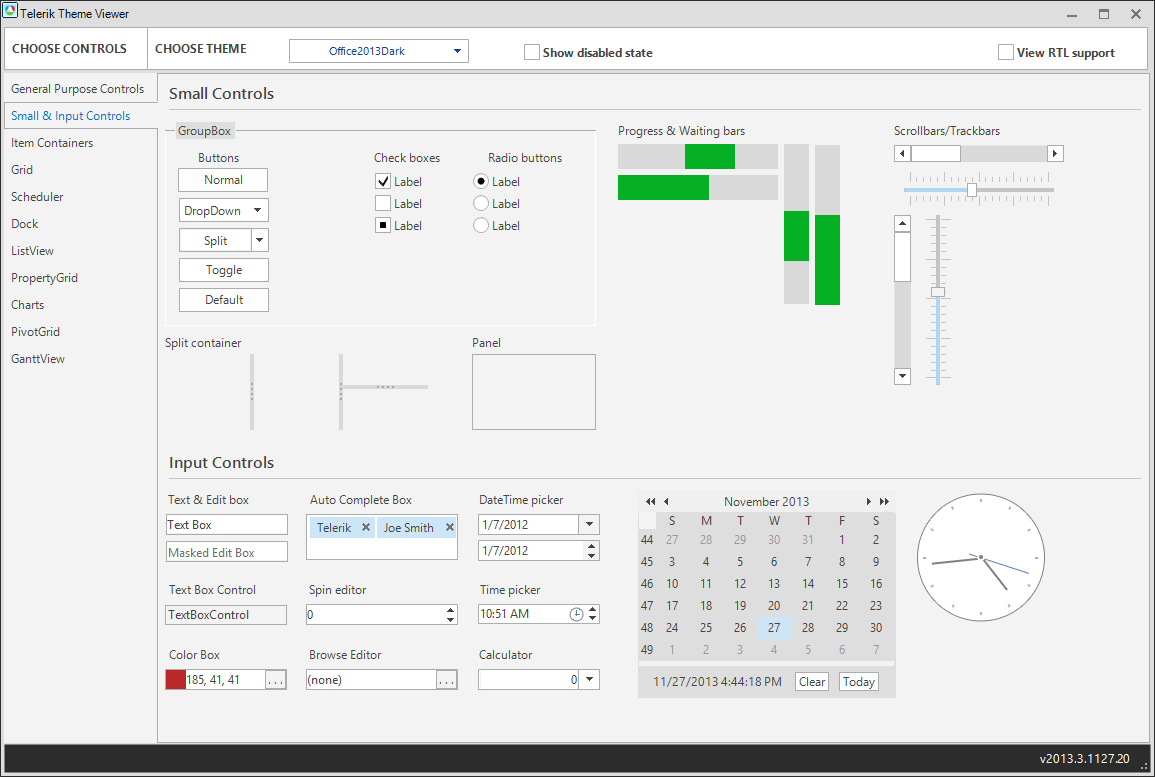 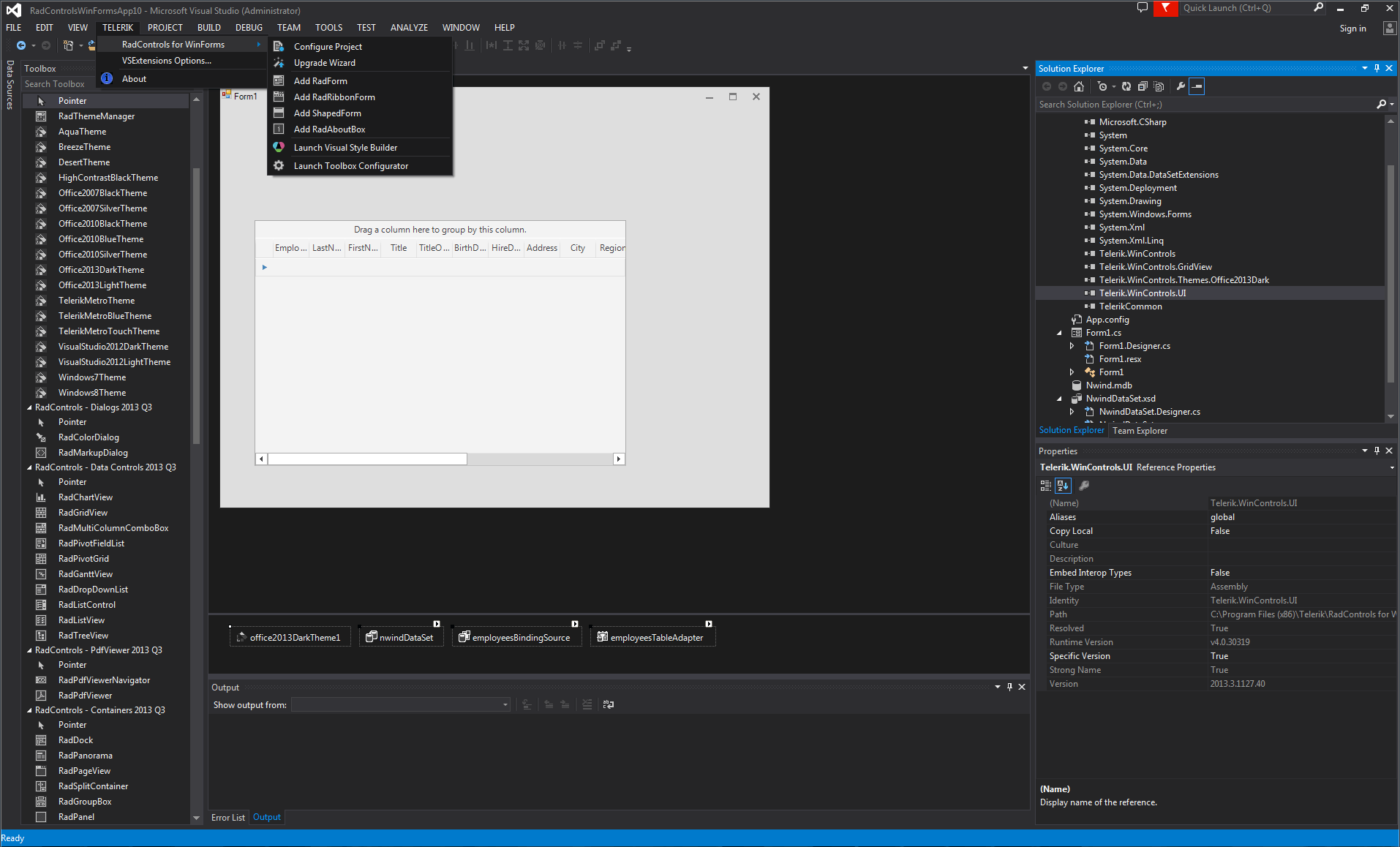 RadControls for Windows Forms Q3 2013 SP1 is now available for you to take advantage of these great new features and theme as well as a series of fixes. More details can be found in the release notes. Be sure to update your projects or download a trial today!

Carey Payette is a Developer Advocate. You can follow Carey on Twitter @careypayette or read her personal blog at www.codingbandit.com.