Kiril  illustrates how to use the new DataForm and Deck of Cards layout in Telerik UI for Android.

The Telerik® UI for Android DataForm, also known as PropertyGrid, is the perfect component for editing the properties of a business object during runtime. All you have to do is provide the DataForm with an entity (business object), and the control will automatically generate editors for each public member. The DataForm offers built-in editors for each of the available primitive
types—numbers, strings, booleans and enumerations.

Here what you can do with the DataForm’s features, at a glance: 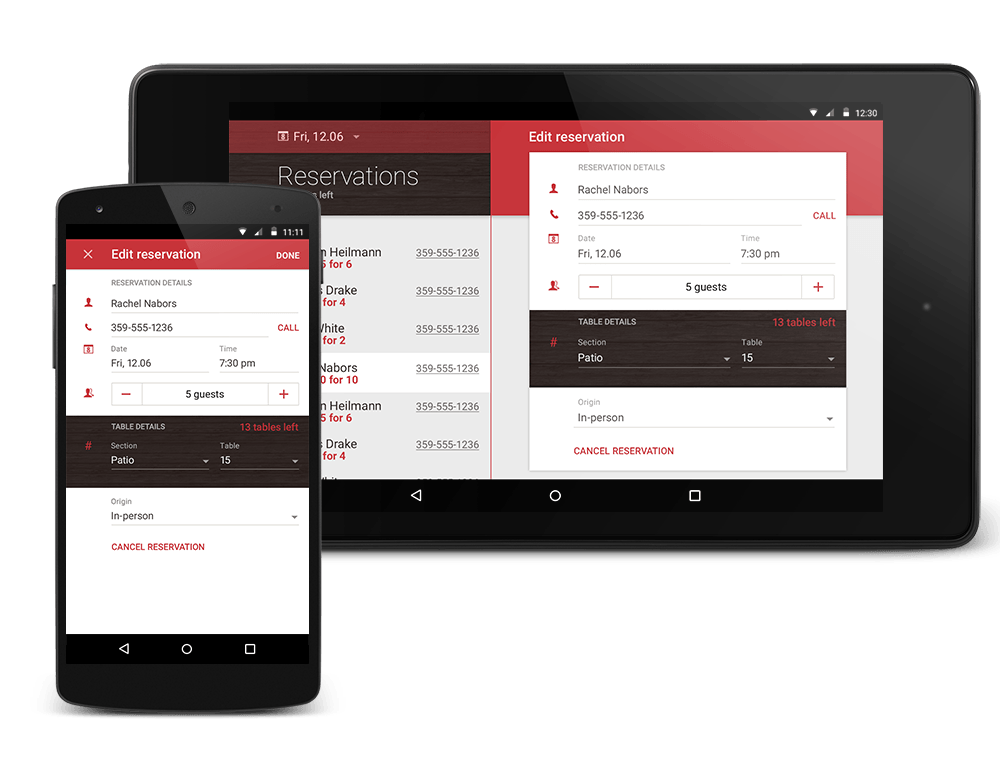 Editing the Properties of a Business Object

The DataForm works with an instance of a business object. Initializing the DataForm with an object to work with can be achieved with a single line of code:

By default, the DataForm provides a set of built-in editors for each of the available primitive types.

For scenarios that involve custom property you can use the setEditorProvider callback to provide your own custom editors.

When editing a property it is important to specify when the value of the property changes. The DataForm offers three commit modes:

Another important aspect of the DataForm is its built-in data validation mechanism. The DataForm exposes an API that allows you to specify the constraints for each property. You also have the option to check the validity of each new property value and choose whether to apply it or display an error message prompting the user that his input is invalid. 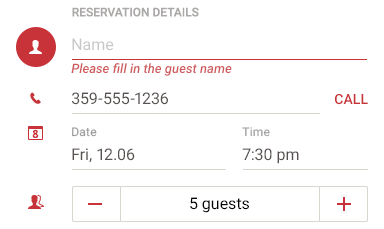 The Telerik DataForm has a read-only mode and can be used to only view the properties of the business object. Enabling the read-only mode is done via a single line of code: setReadOnly(true).

Just like with the editors above, the developer can take advantage of the viewers or provide his own viewer. Read-only can be turned on a property basis by using annotations.

The default layout behavior of the DataForm is to arrange the property editors in a vertical table view. If you require more complex arrangement you have the option to override the default behavior and provide a layout that fits your scenario best.

Property name labels not always fit in the mobile device's screen size which may confuse the user. The DataForm control allows you to set hint text to give the end-user a hint what should be done. To enable a hint text use the EditText.setHint method.

We’re releasing the DataForm with a beta label. The official version should be available with the next major release.

The ‘Deck of Cards’ layout is a new type of layout strategy that you can use with our ListView for Android. 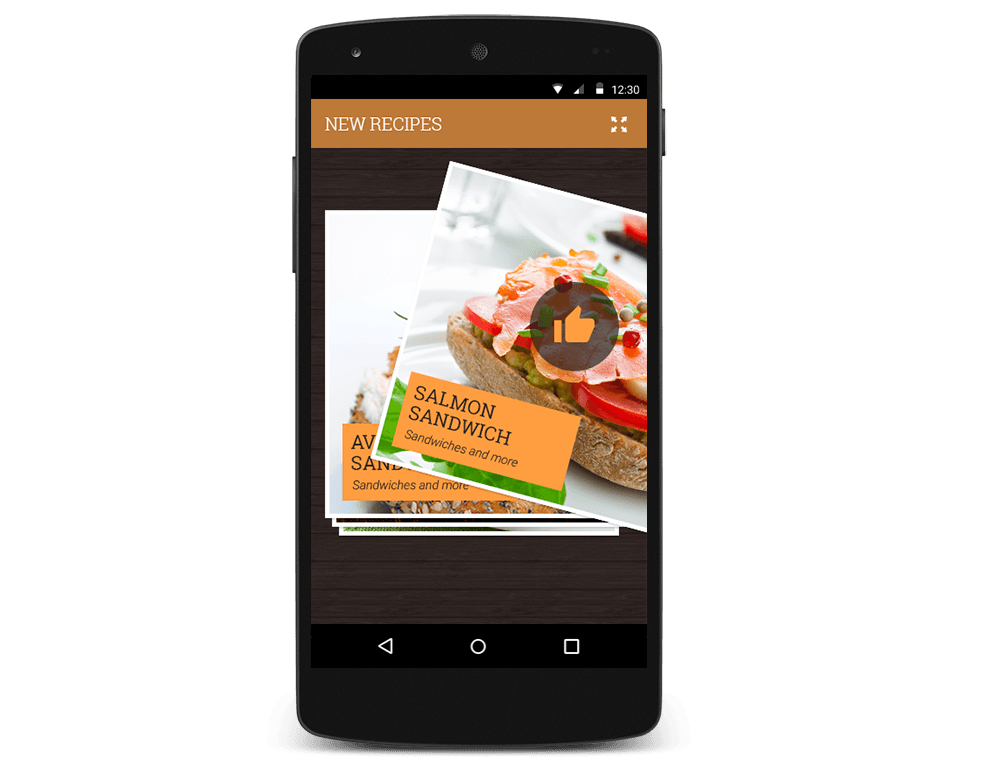 This new layout can be enabled by using the DeckOfCardsLayoutManager. 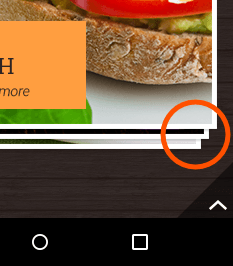 The “Deck of Cards” easily integrates with the existing ListView's SwipeExecuteBehavior. This is ideal for apps that want to emulate the 8fact app’s behavior.

The new layout supports scrolling as well. Scrolling can be performed with an up/down swipe gesture. You can also use the scrollToNext and scrollToPrevious methods to perform the scrolling actions.

The Calendar for Android now supports inline events that can be enabled by a single line of code: 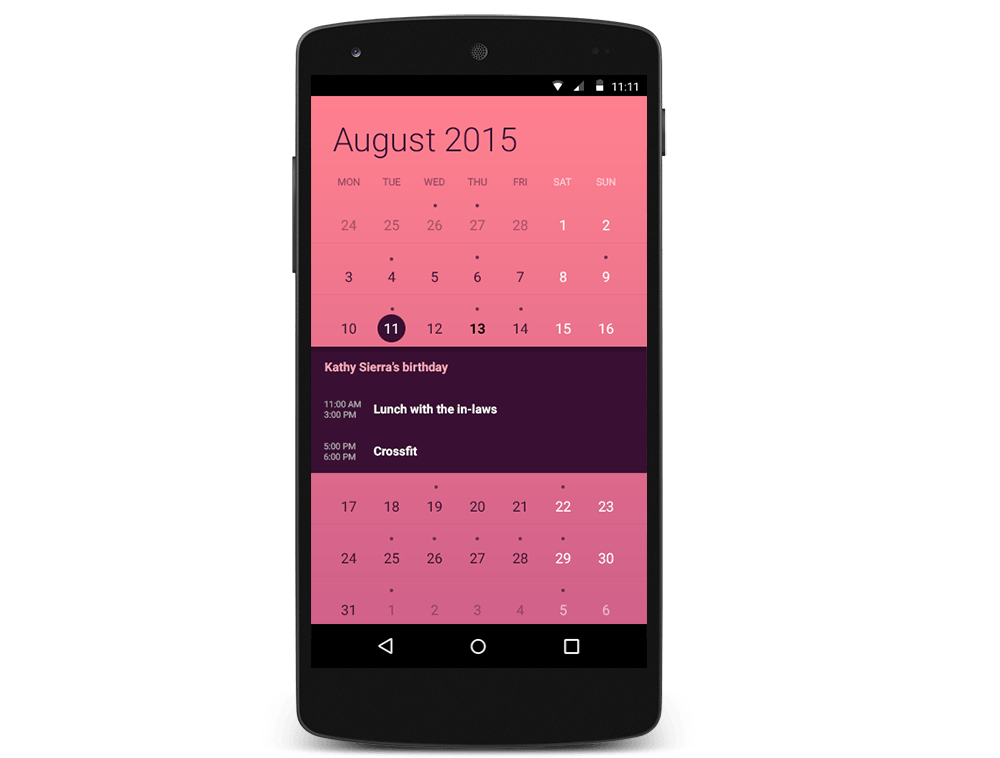 The ScatterBubbleSeries can now be used in categorical scenarios. Each bubble is associated with a category, a value and bubble size. 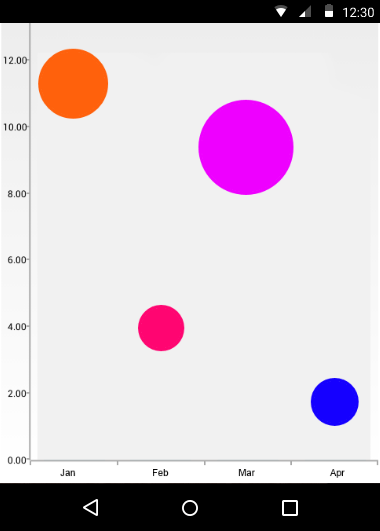 With this we’re further extending the animation support for the Chart. We have added a new ChartAnimationPanel which when provided with a Chart instance animates its series.

All you have to do is create an instance of the ChartAnimationPanel and use its addView method. The view you’re adding should be of the RadChartViewBase
After you can add animations to the panel, remove animations, start all animations simultaneously or just start those belonging to particular series.You also have the option to receive a notification callback when the animations are complete.

If you want to get your hands on the bits, click here to download the latest version of UI for Android. Also feel free to share your feedback on the forums.