About 7% of the 5,000 most popular websites now either block, or present a message to visitors using ad blockers. And most of them are pretty bad at it. Example #1: Forbes.com. 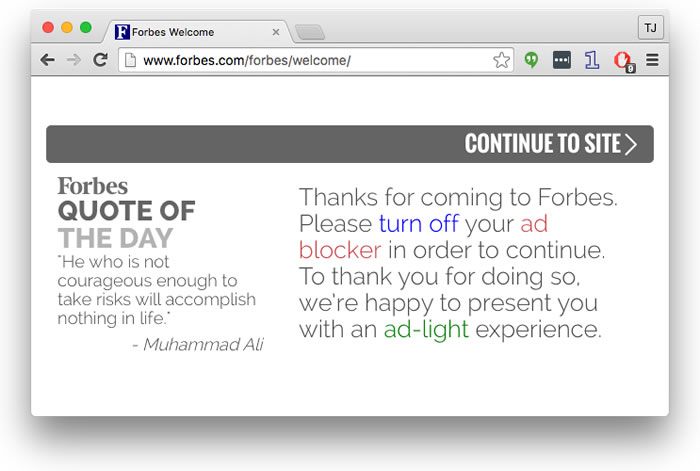 There are several problems with this page, but the biggest is that Forbes, like so many other sites that take this tactic, exhibits a fundamental misunderstanding of why people use ad blockers in the first place. Those reasons are:

Sites that choose to prompt ad blocker users with messages, and fail to acknowledge these well-known facts, set themselves up for outright ridicule from the tech community. Which is exactly what happened when Bloomberg started presenting a dialog to ad blocker users last week.

Bloomberg, please. The REASON I ad-block is for better performance, accessible content, and the best experience! pic.twitter.com/0bZ6mmTwUN

This whole situation makes me a bit sad personally. Publishers have a limited number of options to make money from that content on the web, so I can absolutely understand the motivation behind prompting users this way. However, the tone-deaf wording that nearly all of these sites use is somewhat mind boggling; it goes against the basic tenets of how to get people on your side of an argument. These sites are asking users to undo a choice they’ve made — in this case turning their ad blocker off — yet they show seemingly zero sympathy for their visitors’ very legitimate concerns. At best this tactic will inspire annoyance, and at worst it’ll inspire brand-damaging contempt.

Nice ad blocker FUD on Bloomberg. Improved performance & content (& privacy) is *the whole reason* I use this stuff pic.twitter.com/TsYF9JkgsZ

No, me using an ad blocker might adversely affect your ability to spy on me Bloomberg pic.twitter.com/SRhKgfdJ6d

But it doesn’t have to be this way. Here is some advice I have for companies that are losing revenue as ad blocker usage goes up.

Suggestion #1: Plug something else

If you choose to interrupt ad blocker users with something like a dialog or an interstitial, a certain percentage of your readers will get annoyed and never come back or may have a lesser opinion of your publication.

Bloomberg: We noticed that you have an ad blocker. To punish you, we are going to make you wait to read our content. Should work, right?

@munilass any site that implements something similar I simply stop visiting. Such a shortsighted play

Instead of interrupting the user, you could instead detect when users are using a blocker, and replace the space-that-would-be-ads with a plug for something else you make money from.

The Atlantic does this well, by replacing the right-hand side of the article with big bold lettering and a call to action to subscribe to their magazine. 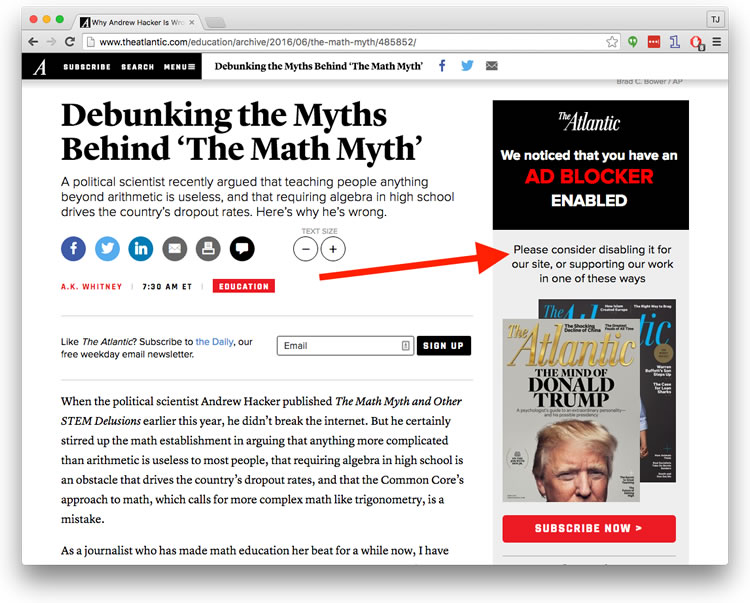 The big advantage of this technique is that readers can still access your content without annoyance. More people reading your content will help you grow your readership, and (hopefully) help convert more people into paying customers at some point.

The Atlantic's ad blocker message was so polite and unintrusive that I actually did add an exception for them pic.twitter.com/6ACZGC1vyq

This ad-swap technique also lessens the blow when your site inadvertently detects ad blockers as a false positive, which is almost inevitable since detecting ad blockers is a bit hacky.

No, Bloomberg, I'm not using an ad blocker. Worst kind of false positive for a media company...

While using ad space to plug other things is a good suggestion, it won’t be enough to prevent people from complaining, as a quick Twitter search for “The Atlantic ad blocker” shows.

I always get mad at the sidebars on The Atlantic scolding me for using an ad blocker; u nerds are lucky I'm readin this 💩 in the first place

To get users to truly respect what you’re doing, you have to go a little further.

Suggestion #2: Provide a way to pay to opt out of ads or tracking scripts

As I mentioned earlier, the biggest reasons people are use ad blockers are for page performance and security. So the worst thing you can do is ask visitors to disable their ad blockers, and then immediately affirm people’s decision to use an ad blocker in the first place, which is exactly what The Atlantic does.

The Atlantic kindly asked me to disable my ad blocker, so I did:
w/ blocker: 3s to load
w/o blocker: 48s to load (52 scripts)
bye, Atlantic!

I'm a big fan of @TheAtlantic and when they flagged I user an ad blocker I switched it off. >70 trackers later! - it's back on :-(

Long story short: if your site is going to show visitors slow ads that track them, don’t ask visitors to turn their ad blockers off - it’ll just piss them off. As another example of this I’ll point to WIRED, which now blocks ad blocker users with the screen below. 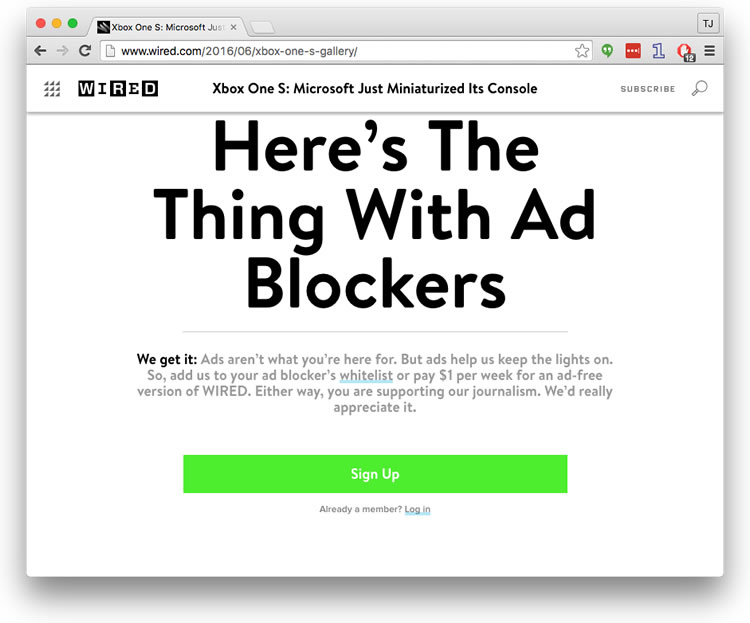 First of all, there are many things not to like about this page. The page violates this article’s first suggestion and blocks the reader from the content. The page also suggests users to turn off their ad blocker, which leads to predictable results.

And @Wired wonders why I use an ad blocker. Whitelisted the domain, but this makes me think again. :-( pic.twitter.com/nKUnkp7sgy

However, WIRED does one thing I really like: they offer an ad and tracking-free version of their site that readers can subscribe to. They are one of the only publications I know of that offers such a plan, and one of the only offerings that legitimately quells ad blocker users’ concerns.

But that being said, although I may disagree with how WIRED blocks ad blocker users, I do admire them for trying something different, and I genuinely hope their subscription-based approach works; it may help incentivize other content-based sites to create similar offerings.

One thing distinctly lacking from all of the examples we’ve looked at so far — Forbes, The Atlantic, Bloomberg, and WIRED — is any wording that acknowledges why people use ad blockers in the first place.

Without showing a base level of sympathy for users, asking them to reverse a decision they’d made to protect their privacy comes off as a desperate plea rather than a serious ask to support writers and editors.

@Forbes yeah, i'm not gonna be turning off ad-blocker. stop trying to reverse time. it's sad, and desperate

I like your "no sense in visiting our site anymore" ad blocker plea. It's pretty cute. @Bloomberg

Therefore my last suggestion is this: if you choose to block ad blocker users, or to just present them a message, use some—any—wording that shows you understand why they’re using an ad blocker. Sadly, I only have one example of this (help me with more in the comments?), as apparently empathy is hard.

That example is Smashing Magazine, which not only uses sympathetic messaging—“We use ad-blockers as well, you know”—but also nicely plugs their paid products and events without restricting access to the main content. 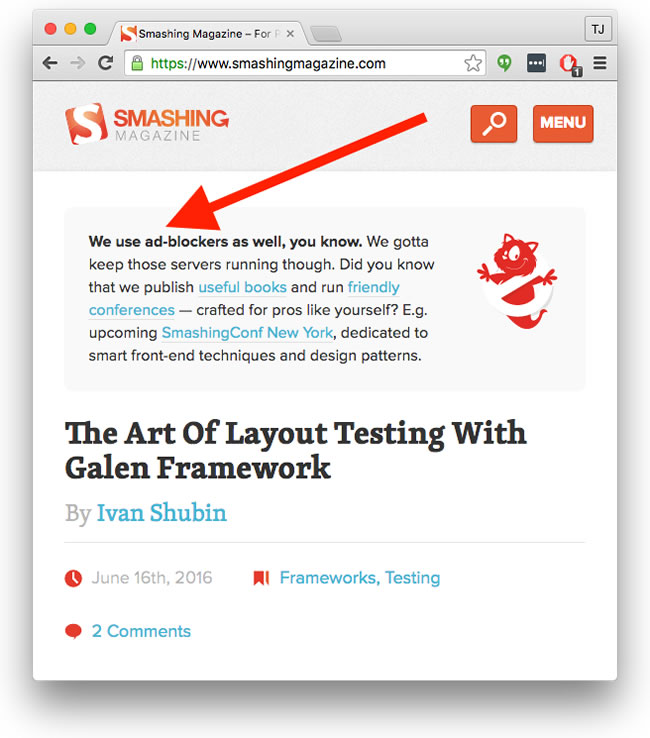 Proving that this approach actually makes a difference to a site’s bottom line is difficult, as most companies don’t publicly disclose analytics on their ad blocking approaches, but I will offer one piece of proof that using sympathetic wording helps.

It was disturbingly easy for me to gather negative tweets to use in this article for basically every site that either blocks, or presents a message to ad blockers users. Head to Twitter and do a search for “Forbes ad blocker”, “The Atlantic ad blocker”, or “WIRED ad blocker” to see for yourself.

But you know what site I can’t find negative tweets about? Smashing Magazine.

Admittedly, Smashing doesn’t have the enormous readership that publications like WIRED do, but they do have a tech savvy audience that loves to defend their ad blocker usage. And personally I think the fact that I can’t find a single negative impression of Smashing’s approach is telling.

Making money from content on the web has never been harder, so it’s easy to commiserate with publishers that are struggling to make ends meet. We all want high-quality content to be created and we want those publications to be supported.

However, if Twitter activity is any indication, the recent trend of attacking ad blocker users only excludes and antagonizes potential readers — especially given the lazy and condescending way that most publishers treat their ad blocking visitors.

With ad blocking browsers like Brave becoming more popular, and public knowledge of the nefarious practices of online ad providers becoming more commonplace, ad blocker usage is only going to continue to increase. Publishers that believe they can convince ad blocker users to turn off a tool that protects their privacy and data plans need to realize they’re on the wrong side of history. Respect your users or you’ll lose them.