1 Answer 60 Views
Dock
This is a migrated thread and some comments may be shown as answers.

Rank 2
Bob asked on 19 Apr 2011, 03:54 PM
While testing the RadControls for WinForms I noticed a minor problem with the handling of document windows in RadDock.
Simply run the Dock - Visual Studio IDE example program and then drag one of the document windows (or use the context menu "New Vertical Tab Group" function) such that there are two document windows; one on the left and one on the right.

Now drag the document window on the right and move it around.

With RadDock we still see both documents as tabs.
When moved over the right tab (the window we are moving) we see four buttons: up, down, left and right.
Dropping onto one of these buttons does absolutely nothing since it is our window (at least the center button is gone).
When moved over the left tab (the other document window) we see five buttons: up, down, left, right and center.
This is correct and all buttons work as expected, although selecting the right button also does nothing visible (but it is correct).

As soon as we drag the document window on the right it disappears (we can also make it floating if we want to) and we only see the other document filling the entire fill area with the five buttons: up, down, left, right and center.  Now everything works as expected.

At a minimum (if you don't want to detach the document window) you should not show any buttons for our current window (instead of only removing the center button, remove them all).  Even better would be to implement this as done by Visual Studio 2010.

There is a Support Issue ID 1932 which seams to cover this but has more to do with having a document form floating. 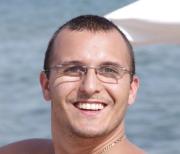 Thank you for the suggestion.

The reason for the experienced behavior is the one that I gave in your previous forum thread - we built the RadDock behavior according to the VS2008 behavior. As you noticed, the process of implementing VS2010-like functionality in RadDock is already added into our PITS system as a feature request.

The issue regarding the buttons that show when it is not necessary will be addressed in one of our next releases as well.

Should you have any other questions or suggestions, do not hesitate to contact us.

Regards,
Stefan
the Telerik team
Do you want to have your say when we set our development plans? Do you want to know when a feature you care about is added or when a bug fixed? Explore the Telerik Public Issue Tracking system and vote to affect the priority of the items
Tags
Dock
Asked by