2 Answers 203 Views
Visual Studio Extensions
This is a migrated thread and some comments may be shown as answers.

We identified several issues with our new Upgrade Wizard shortly after our Q2 2011 release.

The following circumstances are known to cause issues when using the Upgrade Wizard:

All of the above issues have already been addressed and an update has been released through the Visual Studio Online Gallery:
Telerik WinForms VSExtensions

You should be able to use the Visual Studio 2010 Extension Manager to download the update. 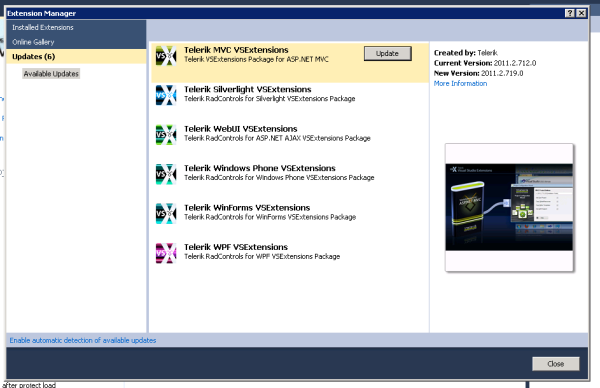 In case you are using Visual Studio 2008 and cannot get updates through the Visual Studio Online Gallery, you will be able to benefit the update when our next Service Pack release.

Rank 2
answered on 26 Aug 2011, 03:05 PM
Still doesn't work for me when I try to do a "Convert to Telerik Web Site". I even uninstalled and reinstalled VSExtensions...

Error Message when I click "Finish":
"Error executing custom action Telerik.Web.UI.VSX.Actions.UpdateReferencesAction: The given assembly name or codebase is invalid. (Exception from HRESULT: 0x80131047)."

Thanks in advance for your help.
0

We just found out that the fix does not work properly with WebSite projects, it supports Web Application ones only.
We are working on having a proper fix for the SP1 release, scheduled for the end of the next week.

Please, bear with us some more.

Thank you for being the most amazing .NET community! Your unfailing support is what helps us charge forward! We'd appreciate your vote for Telerik in this year's DevProConnections Awards. We are competing in mind-blowing 20 categories and every vote counts! VOTE for Telerik NOW >>