The Telerik WCF Wizard that I have shown on this blog several times has been updated and is available on Telerik Labs for download.

Whenever Telerik puts something up on Telerik Labs we hope that some early adopters will try it out and give us feedback. We had an amazing demand for the Telerik OpenAccess WCF wizard and got tons of feedback. The most overwhelming piece of feedback is the name of the wizard: so as of this CTP, the wizard is now renamed the Telerik Data Services Wizard. 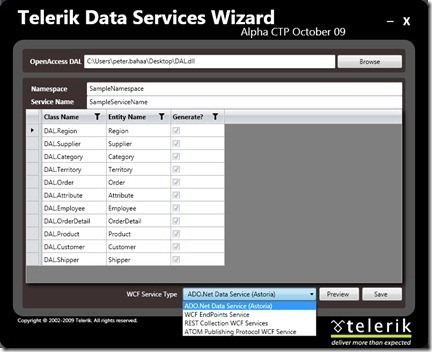 We made some key enhancements in this build for usability. The big thing is that you no longer have to be an ADMIN user to use the wizard. In addition, we made some of the navigation simpler as well as squashed some bugs (mostly around using LINQ statements in older versions of OpenAccess). Speaking of older versions of OpenAccess, the wizard will automatically detect what version of OpenAccess you have installed and auto-update itself to work with that version.

We’re working around the clock on a new build that will have Visual Studio integration and a new UI that is more consistent with the OpenAccess UI. A little further out, we will also include support for ADO.NET Data Services 1.5 CTP2 using the new “data service provider” interface available in Astoria 1.5. Once we are at that point, we will release this a full fledged beta with a target for the wizard to be part of OpenAccess proper by Q1 release next year at the latest.