Great Indian Developer Summit (GIDS) is one of the top developer events in India. This year it attracted over 2500 developers over 4 days of the event (April 17 – 20th). The conference has been hosted for over 5 years and continues to draw top notch companies as participants including Nokia, Microsoft, Google, RedHat, BlackBerry, VMWare, IBM, ThoughtWorks.

At Telerik, the thing that makes us deliver more than expected, is our passion in technology. Telerik participated at the event with an objective of sharing our passion with the Indian Developers. This in-depth engagement was not only limited to hosting a booth but extended to sharing Telerik’s experiences with the attendees as speaking engagements by the product team members.

The enthusiasm of the attendees could be felt much before the official keynote started. The crowds at the Telerik booth were already swelling since the start. Many of the delegates had already been working with Telerik and wanted to know what’s new in the developer productivity suite.

The following Telerik employees were present at the booth answering queries and listening to the comments:

A lot of interest could be seen about the new enhancements made in various Telerik suites especially in ASP.NET AJAX and Silverlight. Of special interest was Test Studio that amazed everyone with its extensive testing capabilities. Kendo UI (the HTML 5 suite from Telerik) piqued a lot of interest from the delegates. While Telerik pamphlet was already included in the attendee kit, the Telerik booth gave out .NET Ninja T-Shirts, stickers and Platform Guidance pamphlets.

Telerik staff participated as speakers at GIDS 2012 and delivered the following sessions:

The star attraction at GIDS was the XBOX draw that took place every evening at 4:00 PM. The delegates who visited the booth were encouraged to enroll in the XBOX 360 draw. One XBOX 360 was given away every day that of GIDS 2012. Delegates could sign up for the draw by dropping their names in the contest urn. People left their sessions to be at the booth for the draw.

GIDS 2012 also surprised us with an award at the event. In the Season V of GIDS 2012, Telerik’s Agile Project management tool - TeamPulse was awarded the best tool in the “Collaboration” category. The award was handed by Venkatesh Subramaniam, a known speaker to the Telerik team present at GIDS 2012. Abhishek Kant, Country Manager, India accepted the award on behalf of the TeamPulse team and thanked the customers for adopting this easy to use intuitive product. 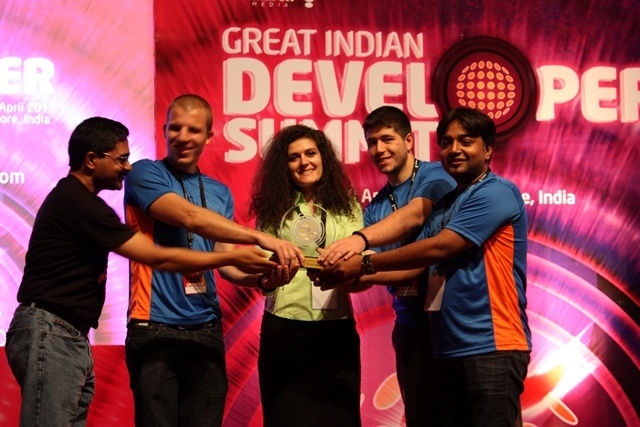 For Telerik, GIDS 2012 was an experience meeting the customers we all strive to delight. It was heartening to know that the IT ecosystem acknowledged the tremendous amount of effort we put in to provide outstanding support to our customers.

Abhishek Kant is passionate about solving real world problems with technology. With over 12 years of experience in IT software industry, he started his career in offshore services delivery with Satyam Computers. From 2004 - 2011, he served at Microsoft in various marketing and business positions. He is certified as a Scrum Master & Microsoft Certified Application Developer. He has worked with diverse technology communities in India including developers, IT Professionals, Information Workers and Consumers. Abhishek holds a BE degree and MBA from NMIMS, Mumbai. Currently, he is helping Indian IT organizations realize improved profitability with the help of Telerik technologies. He tweets at @abhishekkant.