Progress Wins Nine Recent Awards with a Chance for More


We’re excited and honored to announce big wins from the American Business Awards, CRN and others. Vote for Progress to help us achieve even more.

We are really proud to share that we have won a total of nine awards over the last two months. This is really amazing recognition of the hard work we do to make great products that help our customers, and we want to say again a big Thank You to the Progress community. You and your commitment are making Progress a true force of transformation!

The Stevie Awards are the world’s premier business awards, and we have just won five of them!

We received two more recognitions at the Asia-Pacific Stevie Awards for Innovation in Technology Development:

CRN, who has recognized us before, is a respected and longstanding resource for channel-related information and strategic guidance. It is the de-facto standard for the market.

OpenEdge is recognized as one of the top 25 Workflow Solutions Transforming Business. We have been chosen among the 350 best companies in the industry by the CIO Applications magazine. You can see an article, written by our General Manager of OpenEdge, Colleen Smith, in the magazine here.

We’re honored to have been recognized by these respected organizations. But you can help us achieve even more!

Progress is nominated for three highly sought after prizes in a total of six categories—the American Business Awards (People’s choice Awards), the Database Trends and Applications (DBTA) Readers’ Choice Awards and the German Cloud Computing Insider Readers' Choice Awards. We have won eight awards at The Stevies since 2013 and were named a winner by DBTA in 2015. All of this happened thanks to you. Please cast your votes once again for Progress.

1. The Stevies nominations include:

It’s really easy to vote—you just need to open this link, copy-paste the short code above and then confirm that you are not a bot. It takes only a few seconds. (Please note that you need to vote separately for each category.) Voting will remain open until June 3.

One person is allowed to vote multiple times and there are no limitations. It’s mobile friendly, too.

To vote for the DBTA Readers’ Choice Awards open this link. Voting will remain open until May 20.

The website is in German, but even if you don’t speak German it’s really easy to vote. You just need to open this link, and click on the big grey button pictured below. Voting will remain open until Aug 31.

Then find the Progress logo by scrolling down on the list of nominations to categories “d. PaaS – Platform as a Service” and “g. – Cloud Marketing Tools.” Then click on the (old) Progress logo. That’s it. 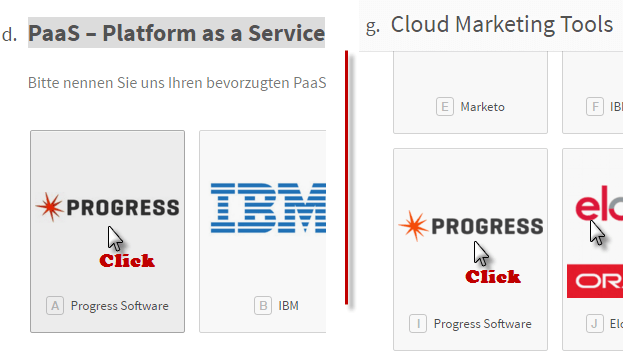 Thank you once again for your support! 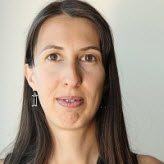 Emi is part of the Corporate Communications team, where she works closely with the influencer community including analysts, bloggers and customers. She also works directly with third-party organizations around awards, speaker opportunities and more.