One of Fiddler’s most-useful but least-used features is its ability to playback previously-captured web-traffic to debug website issues reported by customers “in the field.” In today’s post, I’ll explain the recent Fiddler improvements supporting this scenario.

One benefit to joining Telerik to work on Fiddler full-time is that I get to work with the Test Studio support team, who sometimes use Fiddler to simulate customer environments as a part of support engagements. Their process is pretty simple: the customer clears their browser history and then uses Fiddler or FiddlerCap to capture the interactions between the client browser and the target website. The customer then emails the traffic capture (in SAZ Format) to Telerik’s support team for debugging.

After talking to the support analysts, I learned of a number of issues that could prevent clean repro playback:

To address these issues, Fiddler 2.4.2 introduces a new Import for Playback mode that can be used when loading a .SAZ file into the AutoResponder for replay. When this mode is activated, the following changes are made to the AutoResponder’s behavior:

To use this new mode, select the AutoResponder tab and tick the Enable Automatic Responses box at the top. Click the Import… button and in the Import file dialog box, choose SAZ for Playback from the type dropdown:

Then, select the SAZ file to import and click Open. The AutoResponder creates  rules corresponding to the captured traffic. Right-click the rule for the root page and choose Open URL… from the context menu: 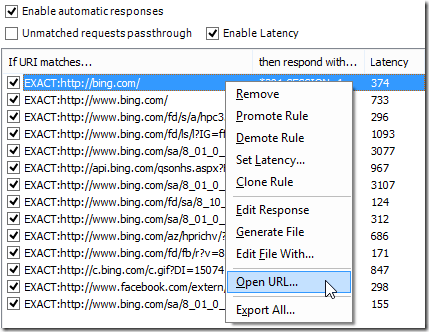 Your default browser will load, and playback will begin. As Rules are matched, each response will be played back and its rule will uncheck, disabling it. (Tip: If you’d like to re-run a repro, hit CTRL+A in the Rules list and hit spacebar to toggle the checkbox on all of the Rules.)

If you find that playback is incomplete and you see HTTP/404 responses in the Web Sessions list, there are two possibilities:

The latter problem commonly occurs when using AJAX methods that try to perform “cache-busting” by providing a random number in the URL—commonly, the current timestamp is used for this purpose.

You can usually identify such requests by looking for a long number stuck somewhere in (usually at the end of) the URL, like so:

To fix this, you can update the rule so it does not require an exact URL match. For instance, use the Rule Editor’s textboxes to remove the EXACT: from the front and delete the timestamp from the end, like so:

Be sure to click the Save button after you’ve updated the rule:

The rule will now match regardless of the timestamp in the request URL.

I hope you find this enhanced functionality helpful!