With Q3 2009 WebUI Test Studio provides the long-awaited by many customers Silverlight recording. Silverlight Automation functionality of the Studio has been specifically crafted to make it as simple to use but also as rich as possible. Now you can benefit from UI object model that covers the complete list of UI elements in Silverlight, and use a rich feature set with very little limitations. Some of the major highlights of the Silverlight Recording functionality include:

Integrated Translators for RadControls for Silverlight

Thanks to the integrated control translators, your team no longer needs to worry about testing applications built with Telerik Silverlight controls. QAs and Developers now have access to exposed validations allowing for specific functionalities to be tested. 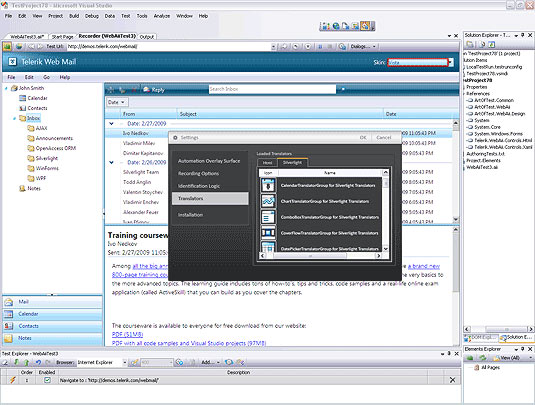 Another Supported Browser: Safari for Windows

Users will now be able to expand their browser compatibility testing to another major browser: Safari for Windows. Record a single test, and have it executed against Internet Explorer, Firefox and Safari for Windows all at once.

A brand new 3D view also ships with the Q3 version of WebUI Test Studio. Accessed through the verifications menu, this new feature allows users to dissect the DOM hierarchy and target a specific element using a new 3D visualizer. This feature is extremely important when building Silverlight automation in real-world applications that have complex visual trees. Furthermore, the UI allows you to build all sorts of verifications against the targeted element with just few clicks.

Easy to use Drag & Drop UI

The updated version of WebUI Test Studio also features a brand new Drag’n’drop functionality. Users can drag the selected element by pulling the crosshairs to the desired drop point. A coordinate system will help you choose the exact place to drop the element by defining the coordinates through pixels or percentages.

Along with the attractive and easy to use Automated Overlay Surface, in Q3 WebUI Test Studio adds a revamped, slick and shiny visual storyboard. The screenshots of your testing actions are now ordered in a coverflow-like sequence, which allows users to easily navigate through the captured steps. The storyboard is also now hooked to the Test Explorer and vice-versa so you can visually identify each step easily.

WebUI Test Studio expands its unit framework support to include XUnit and MbUnit in addition to NUnit and Visual Studio unit testing framework. When installing the Framework, new fully commented NUnit, MbUnit and XUnit ItemTemplates will be added to your list of available templates.

Now you can also use common actions such as do/undo/copy/paste to configure your test steps. What’s more, now users can start recording at a specific point in the test.

FindExpressions are the base for all element searches in the DOM Explorer. With Q3 release WebUI Test Studio features intuitive interface to enable users to build FindExpressions by modifying a rich and extensible search definition pattern. The UI prompts the user to choose a certain attribute type which may vary depending on whether it’s a HTML or XAML element you are trying to build FindExpression for.