I think I may have found a bit of a problem in the OpenAccess ORM, although this might be a fairly rare case. Firstly, some background. We have our database tables defined as normal, but for security reasons (which were defined well before I came to the company...) database access is always performed through so called "Row Level Security Views". These views restrict the returned results to only those accessible to a particular user.

So in our example case, we have a Users table, and a Responsibilities table, both are populated, with Responsibilities table containing a foreign key linking the two. A user can be "made passive" (read deleted without actually removing the data), with the effect that the RLSView will no longer return this user. If we do a search for all responsibilities, and then iterate through them and access the rlsvResponsibility.rlsvUser navigational property, it throws an NoSuchObjectException. I understand that it does this because it -expects- the object to be there (its defined as a foreign key on the table itself), but no user object is returned because of the security restrictions. I would think the expected behaviour would be that it returns null, rather than throwing an exception, no?


The example is a greatly simplified version of the case that actually produced the error, but hopefully this is enough information to see whats going on.

Telerik OpenAccess ORM allows you to work in both ways: to return null when a record is not found or throw an exception. The behavior is controlled by setting in "Model Settings - > Backend Configuration" as shown below: 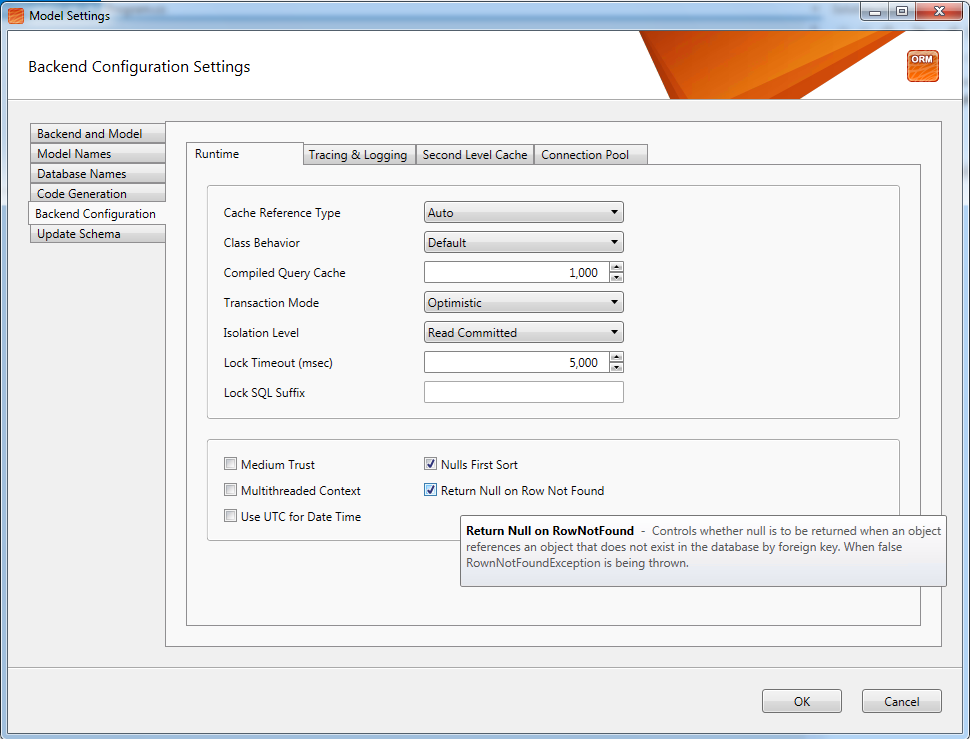 By default the setting "Return Null on Not Row Found" is not checked, which means that if there is a problem with the database integrity an exception will be thrown. In your case this is not database integrity issue but designed behavior so you can safely switch the option on.

I hope this helps. Do not hesitate to contact us again with any further questions.