You have done it hipsters. Thanks to you, we're back in the 80's and command line tooling is cool again - even for .NET development. Guess what else is hot? ASCII art! I'm contemplating adding some ASCII artwork on top of my C# code files, before heading out for the evening in my skinny jeans. That’s savage!

Jokes aside - the command line is really cool and powerful. And CLI tooling provides developers with lots of flexibility to aid in development and DevOps workflows, in addition to appealing to our inner geekiness. With the new .NET Core framework, the focus is squarely on CLI tooling to lower the barrier to entry and make .NET development accessible to all.

Whether you use Windows, OSX or Linux, the command line works the same way everywhere. Let us explore some of the new cross-platform .NET CLI tooling.

For a deeper look at CLI tools and the .NET CLI, check out our whitepaper, The Command Line: Reinvented for Modern Developers, which celebrates the resurgence of CLI tools and provides insight into how modern development platforms cater to application development through CLI—for web, desktop and mobile channels.

Let us see what the new .NET development experience is like on a fresh OSX machine. First, you need to get some things set up. You can get started at dot.net:

Once the install finishes, you should have all of the pieces in place to start building apps with the new .NET Core framework. The new CLI is a foundational cross-platform toolchain for developing .NET Core applications - one on which other complex tooling can be built on.

Meet dotnet - the generic driver for running the command-line tools. Invoked on its own, it will give out brief usage instructions or be able to fire up specific IL code if pointed to a DLL path . The primary usage, however, is using the convention dotnet <command>, where you execute verbs/commands through the dotnet driver. Any time you need help, fire up the help command, like so: dotnet -h/--help.

The new .NET CLI comes pre-packed with some existing commands - essentially 'verbs' that the dotnet driver can execute. Each command has a set of optional parameters and can take arguments. Let's explore all the available built-in commands, along with the popular options that you may find useful.

You can see a sample usage where a new directory is created and then the dotnet new command is invoked - things work 'in place'.

The result is pretty basic - a boilerplate console application with just enough to run itself. The ingredients are a project.json file with all dependencies, a program.cs file with executable code and a NuGet.Config that points to the NuGet source to resolve dependencies.

Here's the boilerplate project.json - notice the dependencies and frameworks nodes. 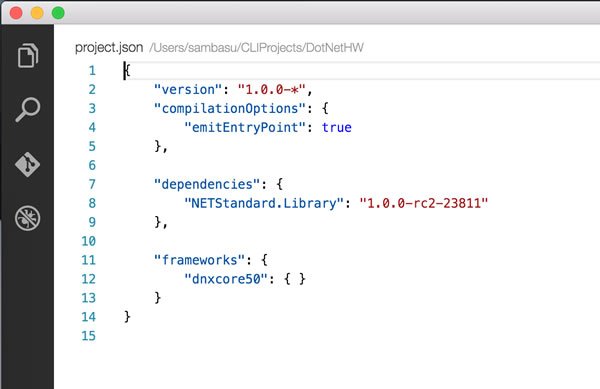 And here's program.cs - the glorious code that spits out 'Hello World' on console. 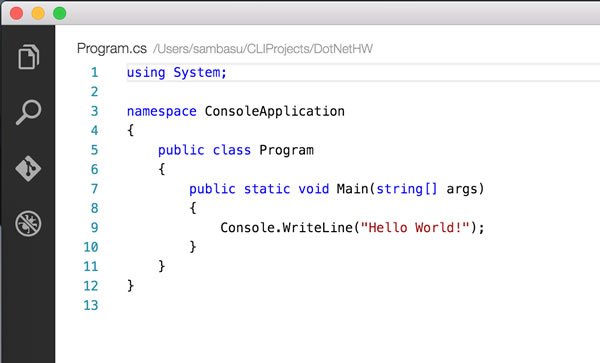 The first time you run dotnet restore on a fresh machine, all .NET Core basic dependencies will be pulled down from NuGet servers - about 100 packages. 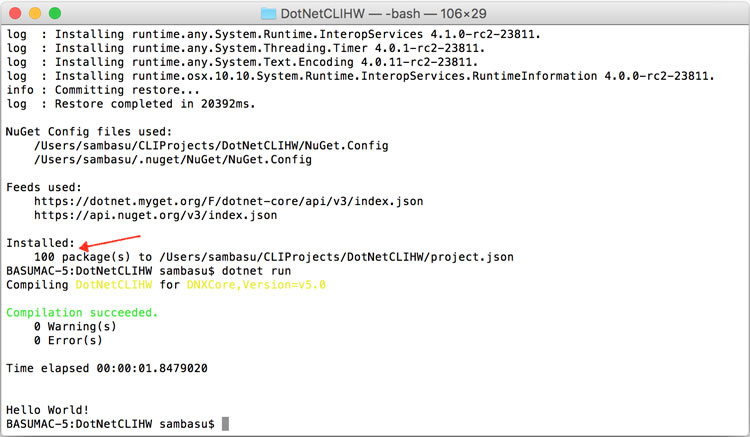 NuGet packages that are pulled down are cached for subsequent usage in a global NuGet cache, which, by default, is .nuget/packages in the user's home directory, as seen below. Subsequent restoration of the same dependencies is very quick.

In our case, take a look at the binaries created for the corresponding frameworks - nice and simple. 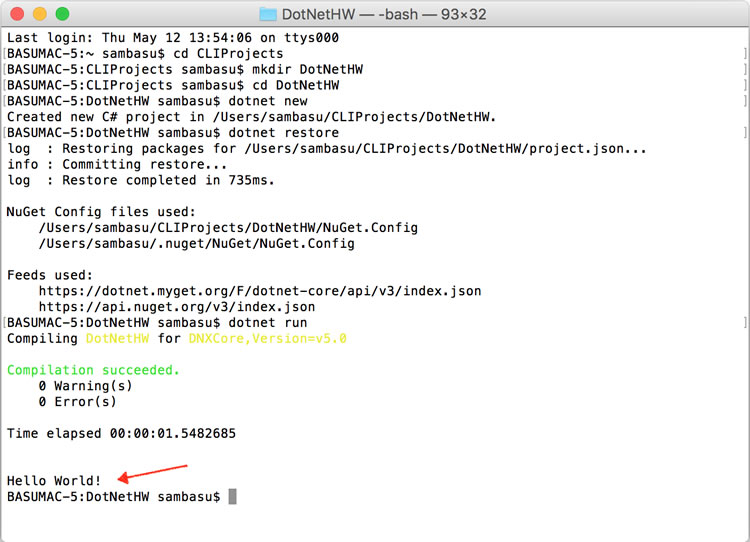 So hopefully you are on board with the new .NET CLI, but perhaps you realize that your development or DevOps workflows need a few more commands. Don't sweat. You can easily extend the .NET CLI through custom commands. .NET CLI tools can be extended in two main ways:

The two extensibility options aren't mutually exclusive - you could easily mix and match.

To extend the .NET CLI with custom tools to use in specific projects, all you have to do is create a portable console application that runs on top of .NET Core. Your application can then be packaged up (using dotnet pack) and distributed through NuGet. To consume, you simply need to make a reference to the tooling in project.json. The custom tooling is only available in the context of the project that references/restores the NuGet package.

Your project needs to follow the .NET CLI driver-command nomenclature of dotnet-<command>. To consume, projects need to simply add a Tools section in their project.json, like so:

Once dotnet restore is run on the project, the NuGet tool and all of its dependencies are resolved. You can then happily use the command dotnet-domything, but only in context of your project.

The custom binary tool can be pretty much anything that the operating system can execute. On Unix or OSX systems, this means any command script saved as dotnet-domything that has the execute bit set via chmod +x. On Windows it means anything that Windows knows how to run. That's it - simple.

Yes, command line tooling is very cool and powerful. Stop fighting it and embrace it with open arms - it will reward you with flexibility, if you know what you're doing. The new .NET framework is lean, modular and open source. It is cross-platform and takes your .NET apps to places that were never was possible before. And .NET CLI provides the consistent foundational toolchain to build new .NET Core applications everywhere.

While the new tooling definitely helps, your apps will continue to be complicated to serve specific business needs of your customers. And unless you're building console apps, you probably need professionally built UI controls - for web, desktop or mobile. Have I mentioned you should give Telerik DevCraft a shot? It's free to try - so what do you have to lose?

Step boldly thy .NET Developer - it's a brave new world. And the command line is your friend!